Shares in Darktrace rallied as the cybersecurity specialist made its first acquisition.

It snapped up Dutch firm Cybersprint for around £40million in cash and shares. The purchase is expected to complete at the start of next month.

Based in The Hague, Cybersprint provides tech that continuously monitors an organisation’s computer network to identify possible threats and weaknesses.

Tech takeover: Cybersecurity specialist Darktrace has snapped up Dutch firm Cybersprint for around £40m in cash and shares

Darktrace will add its capabilities to products, a move expected to accelerate its entry into markets such as cybersecurity powered by artificial intelligence.

Poppy Gustafsson, Darktrace chief executive, said the acquisition allows it to ‘leverage Cybersprint’s seven years of [research and development]’ and make it ‘much harder for cyber-attackers to carry out successful missions’.

Analysts at broker Peel Hunt noted that the tie-up was ‘positive’ given the highly competitive market and a shortage of workers in the tech sector. Darktrace rose 2.4 per cent, or 8.4p, to 352.2p, after the welcome good news.

Despite being a darling of the London stock market when it floated last May the share price has come under pressure.

After peaking at 985p in September, nearly 300 per cent higher than its 250p listing price, the stock has fallen sharply amid doubts about its business model and the effectiveness of its technology.

It has also attracted scrutiny through its association with businessman Mike Lynch, who is currently appealing against extradition to the US to face fraud charges. He and his wife Angela Bacares own just over 15 per cent. 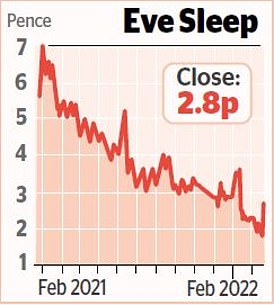 The company’s mattresses and bed frames will be available on DFS’s website from next Thursday.

There are also plans to sell Eve Sleep products in showrooms this year.

It expects the partnership to drive sales as well as raise brand awareness.

There was a small hint of optimism in markets amid hopes that the crisis in Ukraine could yet find a diplomatic solution.

Banking giant NatWest received a boost from brokers following last week’s results, with Deutsche Bank upping their target price on the stock to 315p from 300p while UBS hiked their own to 300p from 290p. It ticked up 0.1 per cent, or 0.2p, to 239p in response.

Lloyds, meanwhile, added 1.7 per cent, or 0.89p, to 52.2p as investors were optimistic about its full-year results today following strong figures from rival Barclays.

Mid-cap miner Hochschild saw profits more than double amid a surge in silver and gold production.

Capital & Counties, the owner of the Covent Garden shopping district in London, swung back into a profit in 2021 as retail rebounded from the pandemic.

Telecoms giant Vodafone unveiled plans to offload its 28 per cent stake worth around £1.9billion in Indian mobile phone tower builder Indus. The stock dipped 0.6 per cent, or 0.86p, to 135.58p.

And Hargreaves Lansdown rose 2.5 per cent, or 27.5p, to 1122.5p as investors looked for bargains after its slump on Tuesday in the wake of disappointing results which prompted brokers to cut their prospects for the stock.