A series of contract wins helped Babcock rise to the top of the stock market’s second tier.

The defence group was the FTSE 250’s highest riser yesterday, surging 6.6 per cent, or 19.2p, to 309.2p as it looked to cash in on governments bolstering national security spending amid the war in Ukraine.

Babcock, which counts the Ministry of Defence (MoD) as its largest customer, landed contracts with the Polish and Australian defence forces, alongside a six-year deal with the Royal Navy’s warships.

Shares boost: Babcock has landed contracts with the Polish and Australian defence forces, alongside a six-year deal with the Royal Navy’s warships

The group also won 20 contracts across its energy and marine business.

Revenues at Babcock inched up 1pc to £2.14billion in the six months to September.

Boss David Lockwood said: ‘We are operating in a macro economic and geopolitical environment that remains volatile.

‘We are focused on effectively addressing the challenges our business faces, most notably inflationary pressures, whilst also ensuring we maximise the increased opportunity set we are seeing in a market backdrop that is supportive for defence.’

Oil stocks bounced back a day after the price of crude hit a ten-month low.

The slump came amid reports that Saudi Arabia and other Opec producers could hike output. 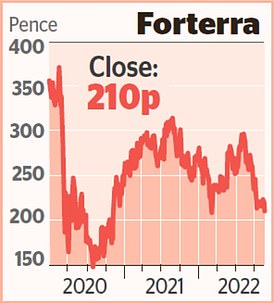 Forterra warned it would raise prices for the fourth time within a year.

Following increases in January and April, the building products manufacturer hiked most of its brick prices by a further 16.5 per cent in October.

This helped revenue soar 23 per cent in the ten months to October.

Now Forterra wants to pass on further costs to customers from the new year.

But the body has since rebuffed claims it was looking at boosting oil production.

Investors in Petrofac dumped their shares after the oil rig builder said chief executive Sami Iskander will leave at the end of March next year.

He will be replaced by Tareq Kawash, a senior executive at energy firm McDermott.

Building materials group CRH enjoyed a surge in sales and profit despite problems at its European business. Sales rose 13 per cent to £20.56billion in the three months to September while profit was up 14 per cent to £3.54billion.

A strong performance in CRH’s Americas materials division was in stark contrast to its European business, where sales were down 9 per cent and profit fell 19 per cent.

This came as the soaring cost of energy and raw materials across Western Europe outpaced the company’s price increases.

Telecom Plus said its business is ‘growing faster than ever’ as it raked in new customers looking to make savings on energy bills.

Revenue at the utility services provider rocketed 51.5 per cent to £562.4million in the six months to September while profit jumped 46.2 per cent to £29.1million.

Telecom Plus hiked its profit forecast for the year, saying it should be at least £95million, following the positive set of results. Shares rose 0.4 per cent, or 10p, to 2345p.

Profit at water supplier Severn Trent increased 2.4 per cent to £261.7million in the six months to September.

But Severn Trent faced soaring energy prices, with its power costs jumping 75.3 per cent to £41.1million in the six months to September. Shares fell 0.7 per cent, or 19p, to 2739p.