The City of London feeds off rumours and yesterday Drax was the name on the tip of every trader’s tongue.

The energy company saw its shares tumble 5.3 per cent, or 27p, to 483p amid talk in the market that one of the world’s most powerful money managers had blacklisted the stock.

The Blackrock Global Clean Energy ETF is among the top Environmental, Social and Governance (ESG) funds, a bellwether for the climate change conscious investor.

Causing a stink: The Drax power plant at Selby in North Yorkshire – which uses biomass – is the UK’s biggest carbon dioxide emitter

In its marketing the fund says it ‘seeks to capture the transformative forces changing societies, driving innovation and redefining business models. Climate change is one such megatrend’.

Up until yesterday Drax had done enough to be a part of the ‘transformation’, moving into biomass – or the burning of wood pellets – instead of coal.

But a report last week saying that its power plant at Selby in North Yorkshire – which uses biomass – is the UK’s biggest carbon dioxide emitter was enough for it be removed. 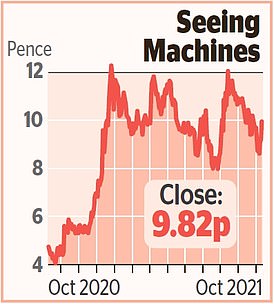 Shares in Seeing Machines soared after the firm signed a deal with oil major Shell.

Seeing Machines provides technology to monitor lorry drivers to check if they are tired. Its software can detect signs of drowsiness such as a lolling head or drooping eyelids.

If a driver is deemed to be too tired, the technology will talk to the driver to alert them. Drivers have said ‘it is like having a mate in the cab with you’.

Shell has a huge fleet of vehicles covering hundreds of millions of miles every year.

Neither Blackrock nor Drax would confirm the move but traders were adamant the stock had been dropped.

One trader said: ‘Blackrock has obviously been forced to sell on the back of the report. Drax has been eco-shamed.’

The fall in the stock is a set-back for FTSE 250 listed Drax whose shares have climbed 263 per cent over the past 18 months.

Oilers were in focus after Brent Crude moved 2 per cent higher to trade at $84 per barrel.

Prices were buoyed by a note from Citigroup which thinks Brent Crude could hit $90 a barrel this winter as more and more businesses switch away from gas.

Aluminum – which is used in everything from beer cans to iPhones – rose by 3 per cent to $3,044 a tonne.

Overall the blue chip FTSE 100 was up 0.72 per cent, or 51.3 points, at 7146.85, But there were some notable fallers, especially the retailers and grocers, amid growing fears about rising inflation.

Analysts believe there is already evidence that consumers have started to curb their spending in the face of increased inflation.

Stuart Cole, head of macroeconomics at Equiti Capital, said the problem that policymakers were facing was that the sources of inflation that had previously seemed temporary were becoming sustainable.

As a result traders are increasingly betting that the Bank of England will raise rates at its December meeting.

Nevertheless the talk of interest rate rises sent banks higher as they always benefit from a higher rate environment.

Further down the league table and Britvic, the drinks maker behind Robinsons, Lipton ice tea and Fruit Shoot, slumped after it was downgraded by analysts.

The analysts also said Britvic will need to invest heavily in labour, logistics and carbon dioxide supply in the next year.

Investors instead turned to rival Fevertree (up 1.6 per cent, or 38p, at 2471p), which is trying to crack America.