The squabbles between Easyjet and its largest shareholder have been revived after the airline revealed it is set to swing to a loss of up to £1.3billion.

Easyjet’s founder and biggest backer, Sir Stelios Haji-Ioannou, was quick to launch another public diatribe against what he sees as the ‘squandering’ of shareholders’ money on new planes from Airbus when much of its fleet is ‘just sitting idle on the tarmac’.

Stelios has been at loggerheads with management for most of this year over the £4.5billion Airbus order as Covid battered Easyjet’s finances, and he has reduced his family’s stake from around a third to less than 30 per cent as a result.

The company has said the order cannot be cancelled entirely despite arranging to push back some of the plane deliveries.

Stelios’s response followed a full-year trading update in which Easyjet told investors to, essentially, prepare for the worst.

It said it carried half the number of passengers this year of the year before and would swing to the first annual loss in its 25-year history.

It plans to run just 25 per cent of its winter schedule and warned finances are under review amid reports it is angling for more Government support. 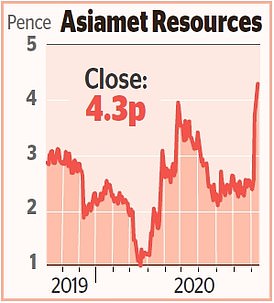 Mining minnow Asiamet Resources was a winner with traders after it struck a £126million deal to sell a copper project in Indonesia.

Asiamet will receive cash and shares in different phases.

It is selling the copper site to PT Win, which is currently a private shell company but intends to list on the country’s stock exchange.

AIM-listed Asiamet will hold more than 22pc of PT Win shares after the float.

It was also nudged higher by a 9.3 per cent jump in Cineworld shares, which were up 2.52p, to 29.52p, as the market digested the news that the secretive Chinese billionaire Liu Zaiwang has raised his stake in the ailing group from 5.6 per cent to 8.6p.

But it was a mixed day for landlords. Two retail property groups were upgraded by Peel Hunt brokers, who said they offer ‘value to the patient investor’.

But student halls-owner Unite Group dipped 2 per cent, or 17.5p, to 863p after reporting it expects a 10 per cent to 20 per cent fall in rental revenues and has fallen short of its target to fill 90 per cent of rooms.

It has already seen cancellations and is braced for more amid the crisis over the conditions for university learning. It is ‘too early’ to commit to a divi, bosses said.

Bargain hunters are circling after recent plunges – though it might also be a more attractive bet now the Government is behind a Rolls-led consortium to build mini-nuclear reactors.

Recruiter Robert Walters shot higher after it reinstated its dividend and said it was seeing the signs of a pick-up in hiring.

There has been strong demand for staff in sectors such as online retail and cyber security, reflecting the impact of lockdowns.

There are green shoots in Asia-Pacific, though the net income it made from hiring fees fell by 31 per cent for the quarter which ended on September 30.

Online retailer Mysale Group rose 8.8 per cent, or 0.75p, to 9.25p after bosses from one of Australia’s biggest online retailers – Catch – took a 10 per cent stake.

Mysale buys seasonal designer clothes in the UK and then sells them in Australia where summer or winter garb will be in demand.