Havoc wreaked on British Land’s estate of shops and offices by the coronavirus crisis has put it on the back foot.

That resulted in a third annual loss in a row for British Land, whose empire includes the Meadowhall shopping centre in Sheffield and office blocks in the City of London.

And the value of its property portfolio fell by 10.8 per cent – or £1.1billion – to £9.1billion. The firm warned the market was set to ‘remain tough’ as rents continue to decline.

Chief executive Simon Carter said it had been an ‘extraordinary year’ that had ‘compounded existing challenges’ for retailers.

More than £1billion was wiped off British Land’s stock market value yesterday, as the shares slid 3.7 per cent, or 19p, to 500.6p. 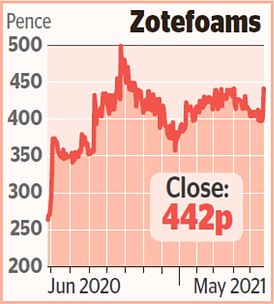 Foam manufacturer Zotefoams had a strong start to the year, as demand for its padding products grew.

The firm, whose customers include Unilever, Red Bull, BMW and Mercedes-Benz, makes materials used in everything from shoes and food packaging to aeroplane and car seats.

While gyms were closed in the pandemic, Zotefoams noted that it had seen particularly strong sales of its materials for use in trainers.

Sales of its specialist insulation products, used in ‘cleanrooms’ such as laboratories, were also up. Shares rose 9.1 per cent, or 37p, to 442p.

The dividend was cut from 16p a share to 15p. But the landlord is trying to turn its fortunes around. It has sold about £1.2billion of property over the past year to boost its finances and fund new developments.

British Land has also spent some £200million on buying retail parks, which have become more popular during the pandemic.

And it is focusing on London office developments, as it believes high-quality buildings will still be wanted by top firms.

Energy company SSE also dipped, by 0.5 per cent, or 8p, to 1542p, after lockdowns pushed down demand for electricity and punched a £170million hole in its profits.

The firm, which owns brands including Tennent’s lager and Bulmers and Magners cider, is going cap-in-hand to investors for £151million.

It needs money to pay down debt and keep the business ticking over, after lockdowns hammered sales in pubs. Around 80 per cent of its turnover came from pubs and bars before the pandemic.

Mike Ashley’s Frasers Group decided to put to bed speculation he would bid for Hugo Boss, after his investment company Mash Holdings built up a 5.1 per cent stake in the German fashion business.

The announcement was made after the market closed, but Frasers’ shares were already up 1.8 per cent, or 10p, to 580p after it said it had sold down its stake in online shopping firm Studio Retail Group.

Bus company Go-Ahead slipped 3.1 per cent, or 40p, to 1260p as chief executive David Brown, said he would step down at the end of the year, after a decade at the helm.

Auction Technology Group, which runs online sales of specialist items from machinery to antiques, soared 12.2 per cent, or 118p, to 1084p after unveiling its half-year results.

It only listed in February, and says its revenue jumped 431 per cent to £34.5million in the six months to March though its losses widened from £12.3million to £22.6million

IT company Softcat said Covid savings may begin to unravel when its staff can travel again.