MARKET REPORT: Marine engineer James Fisher loses more than a quarter of its value after hopes for a recovery are dashed

Marine engineering group James Fisher lost more than a quarter of its value after admitting business had not picked up as much as it had hoped.

In August it told investors it expected trading to improve during the second half of the year.

But yesterday the company said that in the third quarter it was hit by a double whammy of Covid-19 restrictions – especially in the Middle East, UK and southern Africa – as well as a number of oil and gas projects being delayed or even cancelled.

Revenue across the company fell by 17 per cent during the first nine months of the year.

Barrow-based James Fisher said its marine support division, which it is already restructuring, had continued to suffer and that it would need to cut more costs.

The marine services arm provides specialist services to offshore oil rigs and wind farms, and makes underwater, robot-like vessels that can do maintenance and repairs. 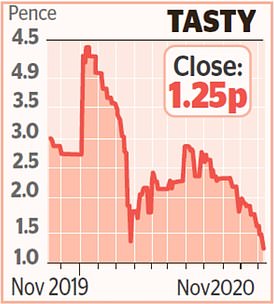 The AIM-listed group will take advantage of the Government’s furlough extension, as well as VAT and business rates holidays to bolster its finances.

The firm – which has almost 50 sites – was forced to lay off a third of its staff in August.

But it was a different story for another marine engineer, Gulf Marine Services, which operates support vessels that service deepwater oil and gas rigs and offshore windfarms.

Gulf Marine Services’ shares were changing hands at 6.89p, a rise of 11.1 per cent, or 0.69p, after reporting that business is booming. It believes profits will be towards the upper end of forecasts – though it acknowledged that it has been largely unaffected by Covid.

Easyjet, on the other hand, has seen even more of an impact from the pandemic. It has scaled back its flight schedule to run just 20 per cent of the flights it had last year following the latest restrictions in France, Germany and the UK.

European and American bourses were not as upbeat, with the Dow down 0.2 per cent and the Nasdaq down 0.7 per cent.

France’s Cac 40 fell by 0.3 per cent and Germany’s Dax by 0.4 per cent as Covid cases continued to surge across the Continent.

But it has been a buoyant week for global stock markets, with more than £3 trillion pumped into them this week as traders have adjusted to the likelihood of a Biden win and news that Astrazeneca’s potential Covid vaccine could be ready by the end of the year.

Astrazeneca, the largest company on the Footsie, fell 0.7 per cent, or 56p, to 8473p despite China announcing it will start trials of the experimental treatment.

Rank Group shot higher after it successfully raised £70million from the sale of new shares in an emergency fundraising. Its stock rose 7.9 per cent, or 6.8p, to 93.1p.

Sales at Warhammer figurine-maker Games Workshop have continued to grow at a stonking rate – and the firm has upgraded its profits forecast again.

It now expects to make £80million in the first half of the year – a 36 per cent rise on what it made in the same period of last year.

Shares in the group, which saw sales boom during lockdown as people picked up hobbies to pass the time, rose 5.6 per cent, or 610p, to 11460p.

Tesco climbed 2.5 per cent, or 5.3p, to 217.8p on the news that competition authorities in Thailand have waved through an £8.1billion deal to sell its stores there – which trade under the name Tesco Lotus – to local conglomerate CP Group.