MARKET REPORT: Ferguson recovery puts dividend back in the pipeline

Plumbing giant Ferguson has brought back its dividend after a stronger than expected recovery from the coronavirus crisis.

The FTSE 100 firm, formerly known as Wolseley, said a surge in demand for home improvements and cost-cutting measures helped to cushion the pandemic’s blow, giving it confidence to restore its investor payout.

Ferguson shelved the divi in April, along with its share buyback scheme, in order to preserve cash.

Plumbing giant Ferguson said a surge in demand for home improvements and cost-cutting measures helped to cushion the pandemic’s blow, giving it confidence to restore its dividend

Ferguson said revenues edged down from £17.1billion to £17billion in the year to July 31, while profits fell from £1billion to about £981million.

The company, which makes most of its money in the US, said demand for services had initially been hammered by virus lockdown measures.

But it enjoyed a rush of business afterwards from customers who subsequently wanted to carry out home improvements and repairs. Shares rose 6 per cent, or 446p, to 7862p after the announcement.

But Russ Mould, AJ Bell’s investment director, warned payouts could dry up again if corporate profits are hammered by a fresh wave of coronavirus restrictions. 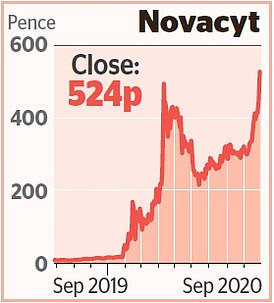 Diagnostics firm Novacyt saw shares surge to record highs after it won another contract with the Government and launched an antibody test for Covid-19.

The firm said its 14-week agreement with the Department of Health and Social Care will see it supply laboratory kit and machines. It is worth an initial £150million.

The British firm is buying the orthopaedics division of Integra LifeSciences, which makes replacement wrist, ankle and shoulder implants.

S&N said this was a fast-growing market and the deal would provide it with a strong pipeline of new products to sell.

Car dealership chain Pendragon lost 0.2 per cent, or 0.01p, to close at 7.46p, after revealing it had returned to profit since lockdown restrictions eased.

The firm said its revenues had been cut in half to £1.2billion in the year to June 30 after sales were hit by the restrictions. Its losses for the period narrowed slightly, from £32.2million to £31million.

However Pendragon said that in July and August, trading had seen a ‘significant improvement’.

It made an underlying profit of £7million compared to a loss of £12million for the two months last year.

Shares in troubled lender Amigo fell 13.7 per cent, or 1.64p, to 10.32p after founder James Benamor’s bid to return was rejected by shareholders.

The 43-year-old stepped back from the business in 2018 but has since become embroiled in a bitter spat over its strategy with company bosses.

He wanted to sack finance chief Nayan Kisnadwala and chairman Roger Lovering and take charge himself – but his attempted coup was rejected by 57.24 per cent in a vote.

ScS posted losses of £3.1million for the year to July 25 against profits of £14.3million the previous year as revenues tumbled by a fifth after lockdown forced the temporary closure of all 100 stores.

But sales almost doubled – up 92.2 per cent – in the last nine weeks of the financial year after stores reopened at the end of May.