MARKET REPORT: FTSE 100 at highest level since start of the pandemic

The FTSE 100 managed to end the week with a bang as it hit its highest level since the start of the Covid-19 pandemic.

The blue-chip index climbed 0.4 per cent, or 26.32 points, to 7234.03, its highest level since late February 2020 before panic over the virus sent markets tumbling across the world.

However, the FTSE 100 is still below the levels it was trading at before the crash caused by Covid.

‘It is interesting to see markets continue to press ahead despite the whirlwind of pressures from supply chain disruption, higher energy prices, rising wages and the threat of rising interest rates,’ said Russ Mould, investment director at AJ Bell.

‘Strong results from banks, a decline in new jobless claims and lower than expected producer price inflation all from the US have served to put investors in a more positive mood,’ he said.

However, Mould added that investors ‘might actually be too complacent’.

‘It wouldn’t take much to cause a shock across markets and equity valuations are looking very rich in many places. Bad news and high ratings tend to result in sharp share price declines.’ 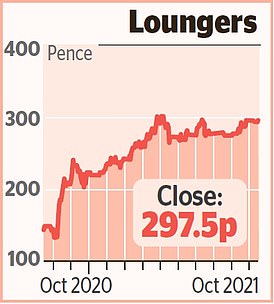 Cafe and bar operator Loungers got a lift as it cheered a ‘significant outperformance of the market’ following the relaxation of lockdown restrictions.

The company, which operates more than 180 clubs and restaurants through its Lounge and Cosy Club brands, said sales in the 20 weeks to October 3 were nearly 27 per cent ahead of the same period in 2019, boosted by the temporary VAT cut for food and non-alcoholic drinks.

The firm added that it plans to open another 10 sites in its current financial year.

The travel sector provided an additional boost as British Airways-owner IAG ascended 3.3 per cent, or 5.76p, to 182.92p following news that the UK will relax its rules on testing for travellers later this month in time for the half-term holidays.

Sentiment was also boosted by reports that the US will remove its ban on UK travellers on November 8.

Private hospital operator Mediclinic was looking healthy, rising 12.3 per cent, or 37.8p, to 346.4p as patient activity bounced back from the pandemic.

The company reported that revenues in the six months to October were up 12 per cent year-on-year at £1.6billion, adding that all three of its divisions were trading ahead of pre-pandemic levels.

Jupiter Fund Management added 3.3 per cent, or 7.8p, to 247.4p after reporting that its assets under management had grown by £2billion since the start of this year.

The company said its assets under management grew to £60.7billion in the three months to the end of September, noting that ‘positive market movements’ had added £1billion and offset around £569million in outflows caused by redemptions from its mutual funds and ‘continued weaker client demand’ for UK and European equities.

Property firm Land Securities inched up 2 per cent, or 13.6p, to 711.6p as it said its rent collections had continued to improve.

The group said 85 per cent of rents due on September 29 had been paid, up from 81pc at the end of June.

Morgan Advanced Materials, a maker of crucibles and components for metal smelting, was lifted 2.4 per cent, or 8p, to 345p after unveiling a finance boss.

Richard Armitage will take the job from next May, the company said, replacing Peter Turner, who is retiring.

Shares in green energy firm ITM Power dropped 5 per cent, or 23.6p, to 451.2p after it raked in £250million from an accelerated fundraising.

The company issued 62.5m shares at a price of 400p each, a 16 per cent discount to its closing price on Thursday, just before the fundraising was announced.