The top-flight index in London was lifted by companies heavily exposed to China, as investors bet on some let-up in strict Covid restrictions despite Beijing insisting they would stay in place.

Blue chip recovery: As countries around the world looked nervously on at developments in China’s economy, the FTSE 100 rose 0.5%

Analysts are split on Beijing’s next move. Helen Qiao, chief Greater China economist at Bank of America, said opposition to the restrictions was mounting.

‘Within this week, or at the most by the end of next week, we think that we’ll see top decision makers coming out and talking about how and why [China] should relax Covid controls,’ she said. 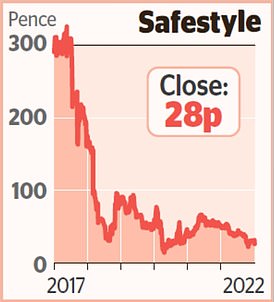 The window and door firm struggled with orders between late September and the end of October as customers tightened their belts.

But the value of orders soared 30% in the last three weeks compared with a year earlier.

However, around 5,000 fewer frames are expected to be fitted this year, meaning profit will be ‘materially below’ market expectations.

But Chi Lo, a China strategist at BNP Paribas Asset Management, warned that while the protests ‘could push the government to open up faster, they may backfire if Beijing really wants to clamp down – we just don’t know’.

John Wood tumbled 15.9 per cent, or 25.4p, to 134p amid concern about the oilfield services and engineering firm’s short-term outlook.

While annual revenue is expected to be between £4.34billion and £4.59billion, this would fall short on the £5.34billion generated a year earlier. JP Morgan cut the target price to 237p from 262p.

Investors in 888 reacted positively to the online betting group’s plans to streamline the business.

The company, which bought William Hill’s non-US operations this year, including the UK bookmaking arm, will cut costs faster than expected and aims to save £87million in 2023 compared with a previous target of £54million.

Wise cheered a rise in customers choosing to use the money transfer giant to move their funds.

Revenue soared 55 per cent to £397.4million in the six months to September while profit jumped 173 per cent to £51.3million.

And sandwich maker Greencore reported a 31.3 per cent rise in revenue to £1.7billion for the year to September.

However, it warned consumer spending was likely to be hit by the cost of living crisis. It fell 8.4 per cent, or 6p, to 65.2p.