With no end in sight to the rail strikes that have crippled the country, Fuller, Smith & Turner boss Simon Emeny is a man on edge.

The pub chain was on course to make a full recovery following the Covid pandemic, perkily telling investors in June it was delighted to see the return of workers and tourists back to central London.

But just six months on and the company is back in doldrums, serving up a fresh profit warning.

Profit warning: Pub chain Fuller’s was on course to make a full recovery following the pandemic, but just six months on and the company is back in doldrums

‘Frustrating,’ was how the weary chief executive described the situation. ‘Since the start of October, we estimate that industrial action has reduced our sales by some £4million and the impact on profitability means that we now expect to report earnings below market expectations for the full year.’

Prior to the warning sales were expected to grow 29 per cent to £327million, not far off the £333million revenue figure reported in 2019-20 before Covid struck.

The results are a blow and highlight what a dire state the hospitality sector is in, with experts warning that the militant rail action cost bars, pubs and restaurants at least £1.5billion in December.

Fuller’s is especially vulnerable because 40 per cent of its 400 pubs are in London.

The company relies on the after-work trade – those nipping in for a pint at about 6pm before taking the train home – as well as shoppers and theatre-goers in the West End.

And there could be worse to come, with further strikes planned for February 1 and February 3 by members of Aslef, the train drivers’ union.

Russ Mould, analyst at AJ Bell, said: ‘With more train strikes on the cards, there is little that Fuller’s can do apart from hope. There is a chance of catching up with some of the lost earnings later this year. 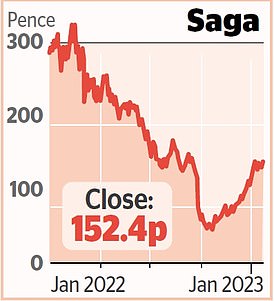 Saga is in talks to sell the underwriting arm of its insurance division to help pay down its debts.

The over 50s holiday and financial services firm said it was in discussions over a possible sale of Acromas Insurance Company, which underwrites around 25 per cent to 30 per cent of its insurance business.

Saga is looking for buyers to offload its in-house insurance business to raise up to £90million to help pay down some of its £721million debt. Shares gained 1.3 per cent, or 1.9p, to 152.4p.

The King’s Coronation in May will add another bank holiday to the calendar and give the public a reason to get out of the house and celebrate with friends and family.’

Among the blue chips, Scottish Mortgage Investment Trust was a riser ahead of a big week for tech earnings in the US, with both Tesla and Microsoft reporting in the coming days.

Scottish Mortgage is a Tesla backer and hopes are that fourth quarter results will hold up.

The electric car maker has had a tough year, between production delays in China, a backlash over chief executive Elon Musk’s acquisition of Twitter and his unloading of tens of billions of dollars of his own Tesla shares.

Coral owner Entain was also a mover, adding 1.2 per cent, or 18.5p, to 1526.5p, after the Mail on Sunday reported that US media giant MGM was considering a fresh bid for the gambling company.

But St James’s Place was on the slide as the lacklustre start to the year for shares in actively run City funds continued.

The fall for one of the UK’s largest wealth managers came after analysts at HSBC dropped their ‘buy’ rating on the stock.

Outside the top flight, National Express was on the charge after the firm revealed its German rail transport arm had won a £800million contract to operate two lines of the Rhein-Ruhr-Express in Germany until 2033.