Shares in Dignity tumbled after it accused its largest investor of trying to take it over on the sly.

The UK’s only listed funeral firm urged shareholders to vote against a proposal by its biggest backer, Phoenix Asset Management Partners, to oust executive chairman Clive Whiley and replace him with one of its own bosses.

Phoenix owns 29.99 per cent of Dignity’s shares – just below the 30 per cent level beyond which an investor is required to make a takeover offer for a company.

Dignity urged shareholders to vote against a proposal by Phoenix Asset Management Partners, to oust executive chairman Clive Whiley and replace him with one of its own bosses

Dignity claims Phoenix mulled taking it over last spring, after its share price nose-dived during the Covid market turmoil.

It lashed out at a ‘wholly unnecessary’ attempt to ‘exert executive control over the board’ without having to table a bid.

All the independent directors would also feel compelled to leave the board, it added, which would give Phoenix even more influence if it installs its founder and chief investment officer Gary Channon. The unrest comes after a tricky year for the company. 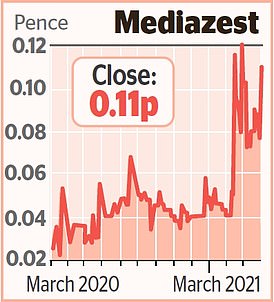 Touchscreen maker Mediazest secured £250,000 of new business and has deals worth a similar amount in the works.

The group makes interactive screens and moving wall displays used for clients including Ted Baker and the Post Office.

It did not name the firms, but said it was a mix of new and existing customers.

Shares in Mediazest, which could benefit from the need for stores to keep social distancing measures in place, rose 20 per cent, or 0.02p, to 0.11p.

Although Britain’s annual death toll soared to its highest level for more than a century last year because of the pandemic, it swung to a £20million loss after tight restrictions were put on funerals.

It was also hit by findings from a Competition and Markets Authority investigation, which concluded Dignity charged much more for funerals than smaller undertakers. Phoenix’s effort will be put to the test in a ballot on April 22.

The unrest spooked some shareholders, as stock closed 6.2 per cent lower, by 41p, to 621p.

The FTSE 100-listed group put itself up for sale this month. Founders David McMurty and John Deer are in line for a windfall worth more than £2billion from the deal. Renishaw closed 2.1 per cent higher, up 130p, to 6380p.

Gold prices were under pressure as hopes that the global economy will improve gained steam, even though many countries are battling a third Covid wave.

Pennon slid despite pledging to hand back a ‘substantial’ amount of back to investors if it doesn’t manage to find another company to buy.

The water provider, whose stock fell 2.5 per cent, or 24.6p, to 968.4p, said in first-half results that it is on track to have £3billion in the bank by the end of the financial year.

Student accommodation provider Unite edged up 0.7 per cent, or 7p, to 1078p, after it sold eight properties for £133million.

It will sell sites with 2,284 beds in cities including Exeter, Manchester and Coventry to Aventicum Real Estate.

It is trying to raise as much as £300million through sales after it was squeezed by universities switching teaching to online and remote learning during Covid.

Beleaguered travel group Carnival advanced despite pushing back the restart date for its P&O cruises in Australia.

Operations will be paused until the end of July, scrapping trips that were meant to start in mid-June, and it is cancelling all voyages to Papua New Guinea and the Solomon Islands for the rest of the year.