MARKET REPORT: Investors hope to make a packet in Mondi tie up

DS Smith was in high demand as chatter grew that Mondi is mulling a takeover bid for the box-making behemoth.

The City rumour mill has been churning out this speculation for a while – and both companies’ swift ‘no comment’ responses to Bloomberg reports did little to dampen investors’ enthusiasm.

Before the pandemic, packaging firms were mostly relegated to the set of companies that could be described as big, but a bit dull.

Cardboard coup: DS Smith was in high demand as chatter grew that Mondi is mulling a takeover bid for the box-making behemoth

But, alongside logistics and warehousing groups (other ‘big but dull’ peers), the explosion in e-commerce has thrust them into the spotlight.

And companies all along the retail supply chain believe online shopping will stay permanently above pre-pandemic levels.

A tie-up of this scale could have real merit, especially after Mondi’s 2020 results showed profits slid 30 per cent to £670million, as e-commerce packaging failed to offset the loss of business in other divisions, such as its office paper arm. 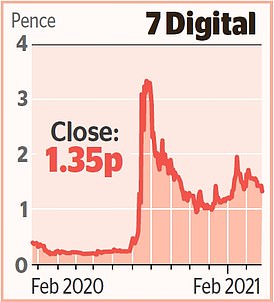 7digital will be able to take advantage of the home fitness craze that exploded during lockdown after signing a two-year deal with personal training system Forme Life.

Trainers will be able to use 7digital’s online music platform to stream and synchronise songs to their videos.

Forme Life’s home service – which provides customers with a full-length digital mirror to use during classes – will be rolled out in the US this spring. But 7digital shares fell 5.3 per cent, or 0.07p, to 1.35p.

‘This has been exacerbated by the plethora of used cardboard stuck in people’s homes; with pick up and recycling services unable to keep up, this has driven up the price of recycled containerboard which the likes of Mondi and DS Smith use to manufacture boxes.’

Mondi was worth £8.7bn at last night’s close after its stock fell 0.1 per cent, or 1.5p, to 1800.5p. Over on Wall Street, video game seller Gamestop was making headlines again, after its shares soared to new highs.

Volatility rocked Gamestop last month when retail investors – who communicated on websites such as Twitter and Reddit’s WallStreetBets forum – sent its shares skyrocketing and pulling the rug out from under the feet of huge hedge funds.

Gamestop shares was close to doubling during the first 90 minutes of yesterday’s session – a jump so big that it triggered three temporary halts to trading.

Back on this side of the pond, investors were kept busy with a results super-Thursday, with the likes of Aston Martin, Evraz, Standard Chartered and Genus putting out numbers.

Losses at Aston quadrupled to an eye-watering £466million last year as the pandemic kept luxury car lovers cooped up at home.

It missed out on the periodic boost it receives from each James Bond film, after No Time To Die’s release was repeatedly delayed.

Russian steel maker Evraz shot to the top of the FTSE 100 leaderboard, rising 6 per cent, or 33.6p, to 598.4p, after foreign exchange movements helped boost profits by 44 per cent last year.

But, at the other end of the scale, lender Standard Chartered was the biggest faller after clocking up a 57 per cent drop in profits to £1.6billion, bringing the banking reporting season to a close with a whimper. Shares fell 6.2 per cent, or 31.4p, to 478p.

Animal breeder Genus (down 5.5 per cent, or 290p, to 4950p) suffered heavy losses on the mid-cap index as disease outbreaks in China disrupted a drive to restock the pig farming industry, which saw millions of pigs culled after an African swine fever epidemic in 2019.