MARKET REPORT: Investors tuck into Just Eat after locked down Britons splurged on deliveries in first three months of the year

Investors snapped up Just Eat Takeaway shares after customers cooped up at home splurged on deliveries in the first three months of the year.

UK orders almost doubled to 64m as Britons treated themselves during the third lockdown.

It was part of a 9 per cent rise to 200m orders across the whole company, where growth was also strong in Germany and the Netherlands.

Lockdown lifeline: UK orders at Just Eat almost doubled to 64m as Britons treated themselves in the first three months of the year

The firm, formed through the £6billion merger of Just Eat and Dutch rival Takeaway last year, said it was boosted by deals that added chains Leon, Tortilla and Chipotle as well as brands Starbucks and Costa to its roster of restaurants.

The company is also investing heavily, expanding its workforce of riders who deliver on behalf of brands such as McDonald’s.

It was the fourth quarter of surging orders. This rise began when European countries first went into Covid lockdowns last spring.

Shares rose 6.8 per cent, or 501p, to 7855p on the back of the first-quarter update, which boss Jitse Groen said showed it was ‘in excellent shape’, sending it to the top of the FTSE 100 leaderboard. 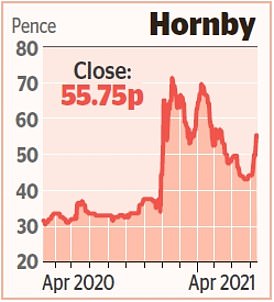 The Kent company was boosted by bumper trading since Christmas, and was able to navigate the most recent hard lockdown much better than the first.

The group releases its full-year figures in June, it said in a trading update.

Later in the year, the AIM-listed company will star in a documentary – Hornby: A Model World – on factual channel Yesterday.

The upbeat announcement rubbed off on Deliveroo, prompting shares in the newly listed firm to rise for only the second day since its float.

The company will reveal how well it fared during the first quarter in a trading update tomorrow.

Deliveroo was also boosted by expanding a grocery delivery trial with Sainsbury’s – down 0.9 per cent, or 2.3p, to 242.8p – to around 100 stores in Britain under a two-year contract. Its stock closed 5.7 per cent higher, up 14.3p, to 265.3p, still well below the company’s 390p float price, however, with its value having dropped from £7.6billion to around £5billion.

Analysts warned that Just Eat’s investment drive could pose problems for Deliveroo and rival Uber Eats as well, with Barclays expecting the group to increase its share of the market in the second half of the year.

Traders rallied behind listed funeral provider Dignity as it hit back in a fierce rebuke against activist investor Phoenix, which is trying to unseat its chairman Clive Whiley and replace him with its own founder, Gary Channon.

Dignity’s independent directors described Phoenix’s campaign as ‘deeply irresponsible’ and said the board is planning to unveil a new strategy in June.

Advisory groups ISS and Glass Lewis, which issue recommendations about how investors should vote at company meetings, have recommended shareholders vote down Phoenix’s resolutions next week. Dignity shares jumped 8.4 per cent, or 54p, to 698p.

But signs of progress at bank note and passport maker De La Rue failed to boost its shares.

A turnaround plan launched by boss Clive Vacher is paying off and annual profits are now expected to be at the top end of a £36million to £37million range it forecast.

But it will take a £13million hit from closing a factory in Gateshead, which relied on a contract to print UK passports that De La Rue lost two years ago.

That incident sent the firm, whose shares fell 4.7 per cent, or 8.8p, to 178p, into a crisis from which it is still emerging.