MARKET REPORT: National Express shares up as buses get busy

National Express shares were driven up after the coach firm reported a strong rebound in demand following the pandemic.

The FTSE 250 group said bus passenger numbers in the UK were at 76 per cent of pre-pandemic levels, adding that it had seen ‘no impact’ from recent problems with fuel.

Looking to the wider business, which includes the firm’s operations in North America, Europe and the Middle East, National Express said revenues in the three months to October were at 83 per cent of the levels seen over the same period in 2019.

Bounce back: National Express said bus passenger numbers in the UK were at 76 per cent of pre-pandemic levels, adding that it had seen ‘no impact’ from recent problems with fuel

It added that it had already bought enough petrol to keep its buses running into 2023, through a process known as hedging, and as a result, the issues with fuel delivery in the UK had had ‘no impact’ on the business.

‘I am pleased to say that our ongoing focus on cost management along with our long-established procurement and fuel hedging programmes mean that we have seen no material impact from input cost inflation,’ said chief executive Ignacio Garat. As a result, the company said profits for 2021 are expected to be in line with expectations. 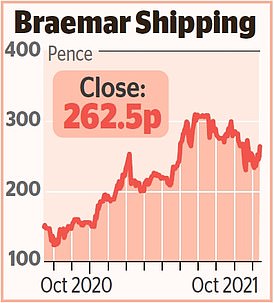 Ship chartering and logistics group Braemar bobbed higher after saying trading was ahead of expectations as the pressure on global supply chains sparked a boom in demand for its services.

The company said its trading environment ‘continues to be positive’ and it expects profits for the year to the end of February 2022 to be £10.8million, 15 per cent ahead of its previous guidance and 21 per cent higher than the previous year.

Braemar also flagged a strong performance in its ship broking business, which helps to charter tankers and other cargo vessels.

However, National Express was feeling pressure from driver shortages across the industry, noting that its school bus business in North America was only running at 92 per cent capacity.

The group said this was having ‘some impact on revenue’ although it was trying to mitigate the effects of providing emergency driver cover.

‘I am particularly grateful for the efforts of our colleagues in mitigating the industry-wide challenges of driver availability,’ Garat said. The shares were lifted 1.1 per cent, or 2.6p, to 231.8p after the update.

There were some market jitters after Chinese inflation hit a 13-year high and Germany slashed its growth forecasts.

However, the blue-chip index was boosted by a jump in global metal prices, notably copper, which in turn lifted the stocks of major miners.

Rank Group, the owner of Mecca Bingo, inched up 2.4 per cent, or 3.8p, to 163.2p as customers returned to its venues following the end of pandemic restrictions.

For the three months to the end of September, the group reported revenues of £163million, up 69 per cent year-on-year, adding that for the year to the end of next June revenues are predicted to be between £700million and £750million.

The company did warn, however, that reduced tourism in London was hampering its performance, while older visitors to its bingo halls were returning more slowly than its other clientele.

Mid-cap electronics maker Discoverie was lifted 2.7 per cent, or 28p, to 1078p after it said its performance in the six months to October was ahead of its expectations.

The group said sales were 23 per cent ahead of the same period last year, while orders had jumped by 64 per cent.

Meanwhile, wall and floor tile maker Norcros climbed 12.8 per cent, or 37p, to 327p after reporting a 49 per cent surge in revenues year-on-year to £200million in its first half amid strong demand in the UK and South Africa.

Home furnishings retailer Dunelm hailed ‘continued strong growth’ in the 13 weeks to September 25, noting sales in the period had jumped 8.3 per cent year-on-year thanks to strong customer demand during its summer sale in July.

However, the shares dipped 0.1 per cent, or 2p, to 1298p as the company said it was ‘not immune’ to supply chain disruption, driver shortages and inflation afflicting the wider economy.