MARKET REPORT: Oil heats up on a Texan chill and vaccine rollout

A cold snap in Texas and the rollout of Covid vaccines across the world helped drive a fresh rally in oil prices.

Brent crude, the global benchmark, rose by 2.5 per cent to trade above $63 a barrel as traders banked on economic growth and a spike in travel later this year. Prices hit new 13-month highs and are now around the same level as mid-January 2020.

This was before reports were widespread that a deadly virus was circulating in Wuhan and was starting to appear in other countries – and a later nosedive that saw Brent reach lows of just $19 as the world ground to a halt for months amid lockdowns.

Cold snap: Brent crude prices and those of US oil – known as West Texas Intermediate – were also given a jolt from the coldest blast of weather in Texas for more than 30 years (pictured)

Rapid vaccine programmes in the West mean the citizens of big oil-consuming nations could be driving and flying at almost pre-pandemic levels within a few months.

Added to recent pledges from Opec+ nations to curb their output and prices look set to stay steady or even continue to rise.

Brent crude prices and those of US oil – known as West Texas Intermediate – were also given a jolt from the coldest blast of weather in Texas for more than 30 years.

Sources on the oil industry grapevine believe temperatures of minus 18 degrees could knock 1m barrels a day off production in the shale-rich Permian Basin. 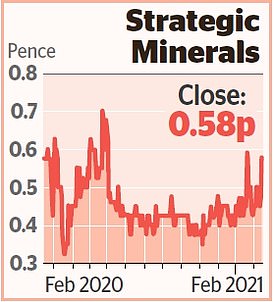 Strategic Minerals soared after its Cornish subsidiary was granted funding as part of a project to kick-start the county’s mining industry.

The Cornwall Resources Limited division will receive almost £450,000 – provided it also spends more money on the project – from the European Regional Development Fund for its role in the Deep Digital Cornwall scheme led by the University of Exeter’s Camborne School of Mines.

US oil rose by 2 per cent yesterday to more than $60 a barrel – also a 13-month high and a far cry from the first slide ever into negative prices last April.

But the gains among energy stocks were outshone by hard-hit holiday, transport and leisure firms.

Another commuter-dependent stock, Cafe Ritazza and Upper Crust-owner SSP, rose 6.8 per cent, or 20.2p, to 319p, before announcing after the closing bell that non-executive director Per Utnegaard will step down at the end of this month. The former Swissport chairman has been on the company’s board for six years.

Elsewhere, oil wasn’t the only commodity to start the week with a bang. Tin prices hit seven-year highs of almost $23,400 a tonne.

Electronics manufacturers clamoured to buy dwindling physical stocks of the metal, which has been in demand during the shift to work-from-home as laptop and device demand has soared. The tin price helped AIM-listed Afritin advance 10.3 per cent, or 0.41p, to 4.41p.

The company makes lateral flow coronavirus tests and is reported to be lined up for a government contract to manufacture millions of kits that could be used at offices or even nightclubs once lockdown lifts.