‘Revenue is vanity, profit is sanity, cash is king’ the saying goes and food delivery business Just Eat appears to have got the message.

Higher prices and delivery fees and lower spending on overheads helped it generate a underlying second half profit of £131million, a big swing from the grim start to the year when it posted losses of £117million in the first six months.

The result was achieved despite falling order numbers.

Profits up: Just Eat generated a second half profit of £131m, a big swing from the grim start to the year when it posted losses of £117m in the first six months

Shares rose 4.1 per cent, or 86.5p, to 2215.5p as analysts said the company was on the right track after years of chasing market share in the high-growth, low-profit sector, which resulted in expensive acquisition mistakes and eye watering marketing spend.

Russ Mould, analyst at AJ Bell, said: ‘When interest rates were zero a lot of money was misallocated because it cost nothing. But investors are bored of it, profit matters and they want a return.’

The results also take the pressure off chief executive and billionaire Jitse Groen who has been targeted by investors after it bought Grubhub in 2020.

The acquisition was supposed to be a way in to North America but less than a year after the deal Groen put the company up for sale and wrote down the value of the division by £2.6billion.

All eyes now turn to Deliveroo, a heavily loss-making company which has results out today.

Among the top risers, oil trader Glencore was rocketing along after the International Energy Agency said oil demand is set to rise to an all-time high in 2023.

Demand for crude could rise by 1.9m barrels a day to reach a record 101.7m a day as China starts to relax its Covid restrictions, the body said. 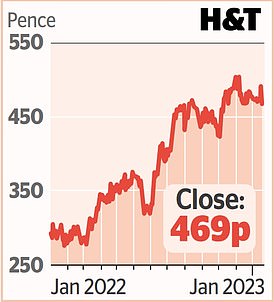 The UK’s largest pawnbrokers H&T said that it had enjoyed record sales figures in December.

Demand for pawnbroking loans was buoyant with the pledge book growing to £99million at the end of December from £66.9million a year earlier.

Another top riser was education publisher Pearson which will beat 2022 profit expectations as people sought more qualifications after the pandemic.

Pearson was for years a City darling and remained a conglomerate long after they were fashionable.

It was home to the Financial Times and The Economist and had stakes in Lazard bank and TV production houses before being ransacked by John Fallon who sold the family silver while announcing a series of profit warnings.

Since 2020 it has been run by Andy Bird who came from the Walt Disney Company.

TI Fluid Systems fell 14 per cent after it said it was forced into production shutdowns at the back of end last year as a result of China’s Covid policy.

The company, which makes cooling systems for brakes in cars, believes conditions there will remain challenging in the short term. It was down sharply by 13.9 per cent, or 18.8p, at 116.8p.

Housebuilder Vistry bucked the trend, saying its affordable housing and rental sector work has partly cushioned it from the wider property slowdown.

Chief executive Greg Fitzgerald said it is on track to meet profit expectations of £418million for 2022, up 21 per cent from a year earlier.

Builders are grappling with headwinds that could impact sales, including a sharp rise in mortgage costs. Last year political uncertainty also knocked sentiment.