Shares in engineering group Senior stormed higher as it sounded a positive note on profit.

The group, which rejoined the FTSE 250 this month and supplies products for the likes of Airbus, Boeing and Rolls-Royce, said profits for 2022 should be ‘above the top end of the range of consensus expectations’.

Analysts had pencilled in a range of £16.2million to £18million.

Senior has benefited from a strong performance in its flexonics division which saw a surge in demand among the heavy duty truck and power and energy markets.

The group’s aerospace division also traded well, with City broker Jefferies highlighting how it sees a ‘significant recovery potential’ across both businesses. Shares surged 7.5 per cent, or 10.2p, to 146.6p.

Rolls-Royce, meanwhile, gained 3 per cent, or 3.2p, to 111.4p after Exane BNP Paribas raised the jet engine maker’s rating to ‘neutral’ from ‘underperform’.

The group also renewed its agreement to supply engines to the British luxury yacht manufacturer Sunseeker until at least 2025.

Private equity firm Bridgepoint added 7.5 per cent, or 17p, to 245p following the launch of its share buyback programme worth up to £50million.

Ceres Power Holdings, which develops electrolyser technology for green hydrogen production, cheered ‘another year of significant investment for growth’ at the company after its revenue for 2022 remained in line with previous forecasts of around £21million. 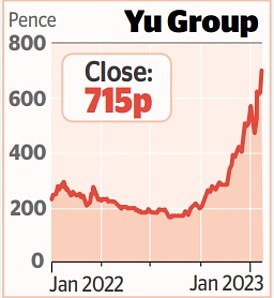 Yu Group is on course to beat revenue forecasts after a record-breaking year.

The company, which supplies energy, gas and water to businesses, said revenue for 2022 looks to have risen more than 76 per cent to over £275million – up from a forecast of around £260million in November.

Investors will be rewarded with a ‘modest’ dividend payment, bosses said.

They also said Yu has made a strong start to the new financial year.

The company also announced a series of positive updates on projects such as its Chinese joint ventures, 100kW electrolyser module and fuel cell and electrolysis test facility. Shares surged 7.6 per cent, or 29.5p, to 416.4p.

Advertising giant M&C Saatchi was on course to generate its biggest profit to date following ‘new business wins’ and cost-saving measures. Profit for 2022 was likely to have risen 14 per cent to £31million. Revenue is expected to be 9pc higher at £271million compared with the previous 12 months.

There was also a change at the top. Chairman Gareth Davis, who took up the role in January 2021, will step down once a replacement is found. Shares inched up 0.6 per cent, or 1p, to 168p.

Meanwhile, land development firm Henry Boot warned that its profit for 2022 would be ‘slightly below market expectations’ at £48.1million following a slump in the value of its investment portfolio.

Meanwhile the UK’s largest distributor of newspapers and magazines found itself engulfed in a dispute with investors over a resolution to relax policies on making political donations of up to £50,000.

Smiths News insisted it had no plans to make any political donations but wanted to make sure the company’s current guidelines were not stricter than the regulatory framework.

The resolution passed but the company pledged to ‘initiate dialogue’ after 21.23 per cent of shareholders voted against the proposal at yesterday’s annual general meeting.

In a separate update, Smiths News reported that business was trading as usual with 46 per cent of newspaper and magazine revenues secured through to 2029. Shares sank 8.3 per cent, or 4.6p, to 50.8p.

Carnival made a stellar start to the new year after its cruise line Cunard, which has three ships, enjoyed its best January for bookings in the last decade.

The company added there was demand for the fourth Cunard ship, the Queen Anne, which will come into operation early next year. Shares rose 2.2 per cent, or 16.6p, to 785.4p.