Oil was the main talking point after Opec decided against ramping up production in April.

The surprise decision taken by the organisation, which includes Saudi Arabia, Iran and a host of African countries, sent Brent crude prices almost 5 per cent higher to $67.20 per barrel – its highest level since January 2020.

Analysts said Saudi Arabia and its partners are trying to drain inventories and push up prices to near $80 per barrel before the pandemic subsides and economic activity returns to some normality.

Crude price: Opec, which includes Saudi Arabia, Iran and a host of African countries,  has decided against ramping up production in April

It is well known Saudi Arabia wants oil priced at $80 to $85 a barrel so the country can balance its country budget.’ Aside from Opec, the budget hangover also dominated proceedings. 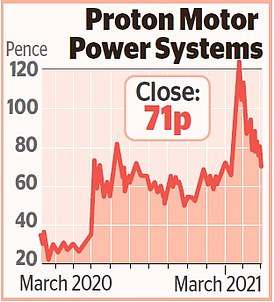 While many viewed the budget as anti-business, Goldman Sachs believe Chancellor Rishi Sunak – an ex-hedge fund manager – won’t ever push through the corporation tax hike, adding that it is electioneering posturing.

Alain Durre, analyst at Goldman Sachs, said: ‘We think there is more political strategy at play with the announced corporation tax hike.

‘The implementation is a year out from the next general election. We think the tax rise could well be cancelled as part of a pre-election sweetener campaign.’ The super-deduction over the next two years was greeted warmly in the City as it will boost listed companies with grand capital expenditure plans. These include the utility firms which spend heavily on pipes and machinery.

Other notable risers on the blue-chip index included Melrose Industries which posted a £120million profit, allowing the industrials buy out firm to restart dividend payments. Shares were up 3.7 per cent, or 6.55p, at 183.5p.

Aviva gained 1.2 per cent, or 4.70p, at 387.9p after the insurer completed its sell-off of international divisions to focus on the UK, Ireland and Canada. It also reported a profit of £2.9billion in 2020, compared with £2.7billion the previous year.

And staying outside the top flight, housebuilder Vistry became the latest to reveal a further hit for cladding safety works in the wake of the Grenfell Tower tragedy.

The group, which fell 3.5pc, or 32p, to 943p, is putting aside £20.9million after uncovering another ten buildings more than 59 ft high where it acted as developer and remediation work on cladding may be needed.

Details of the impact came as full-year results showed pre-tax profits dropped 43.5 per cent to £98.7million after the spring lockdown affected its first half.

But it cheered a strong second-half performance and said profits will bounce back sharply in 2021, with at least £310million expected on an underlying basis.

The group also resumed dividend payouts with a 20p final divi for 2020.