Promise of a dividend at Smiths Group was not enough to put the engineering group in investors’ good books.

The company, which creates items from intensive care devices to airport security scanners, announced plans to cut jobs after its profits for the year to July 31 tanked by 23 per cent to £327million.

Smiths Group, which creates items from intensive care devices to airport security scanners, announced plans to cut jobs after profits for the year to July 31 tanked by 23 per cent to £327m

Russ Mould, investment director at AJ Bell, said: ‘The understandable lack of any earnings guidance for the 2021 financial year, emphasis on investment for the company’s long-term future which could weigh on short-term profits, and the absence of a firmer timetable for the delayed, and long-awaited, spin-off of the medical division are all possible reasons for the share price slide.’

Smiths began attempts to sell off its medical division late last year, in a deal it hoped would value the unit at around £2.4billion.

The medical arm has been burdened with extra costs this year as it rushed to make coronavirus ventilators for the NHS, and Smiths gave no further update about the sale. 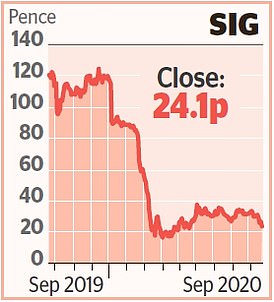 Building products firm SIG tumbled as it revealed its first-half losses had continued into the second half of the year.

The Sheffield-based company said its like-for-like sales were down 23.9 per cent in the first half of the year, as the pandemic put the building market on hold.

This pushed it from a £2.2million profit over the same time last year to a £125.4million loss.

But revenue for the year would be down by less than the £500million it had originally predicted.

It is part of a wider restructuring designed to cut costs, and the company added yesterday that there would be job cuts. It declined to reveal how many.

Rolls-Royce, which has been battered by a lack of demand for its aeroplane engines, was the only blue-chip stock to perform worse as it slid 7.6 per cent, or 12.3 per cent, to 150.1p.

African telecoms firm Airtel added to the index’s woes, as it fell 7.2 per cent, or 4.3p, to 55.8p amid signs of worsening economic performance in the countries it operates in.

Pets at Home was one of the few bright spots on the index, bounding higher by 27.8 per cent, or 84.8p, to 390p as it posted better-than-expected results.

And while most of the travel sector has been stuck in the doldrums for the majority of 2020, National Express managed to claw back a 12 per cent, or 15p rise, in its share price to 140p.

The coach company said it was ‘resolutely optimistic’ about its long-term prospects, revealing that trading had been ‘slightly better’ in recent weeks than it had expected.

Its gloomy base case had forecast revenue to be 50 per cent lower than last year until the end of August.

Hostel company Safestay was also doing remarkably well despite lockdown. In its half-year results, the firm – which operates 20 hostels across 11 European and four UK cities – said occupancy for the first six months of the year had been just 55 per cent.

This pushed revenues down 58 per cent to £3.4million. But losses were a relatively subdued £1.2million, as Safestay took advantage of government aid schemes and reduced as many costs as possible.

In July and August, the firm was even managing to trade at the higher end of its forecast. Shares climbed 3.8 per cent, or 0.5p, to 13.5p.

While Covid has been an obstacle for most firms, some have tried to bend it to their advantage.

Science company Open Orphan confirmed speculation it was in negotiations with the Government to run a £7million coronavirus vaccine trial on humans. But shares fell by 13.3 per cent, or 2.5p, to 16.3p.