MARKET REPORT: Tesla shares crash to lowest level in more than two years amid US Senate probe into relations with China

Shares in Tesla crashed to their lowest level for more than two years after the electric car manufacturer became embroiled in a US Senate probe into relations with China.

The stock fell 8.9 per cent on Wall Street, taking losses since its peak in November last year to nearly 70 per cent.

The sell-off came after letters from the US Senate finance committee asking eight major car makers about their Chinese supply chains were made public.

Among those to be contacted, alongside Tesla, were General Motors, Ford, Honda, Toyota, Volkswagen, Stellantis and Mercedes-Benz.

In June, a US law banned the import of forced-labour goods from Xinjiang, in a pushback against Beijing’s treatment of Uyghur Muslims, which Washington has labelled genocide.

In the letter, committee chairman Ron Wyden said: ‘It is vital that auto makers scrutinise their relationships with all suppliers linked to Xinjiang.

‘Unless due diligence confirms that components are not linked to forced labour, auto makers cannot and should not sell cars in the US that include components mined or produced in Xinjiang.’

The news will be a particular worry for investors in Tesla and the future of its sales in China, the world’s largest car market.

Tesla’s share price has been weighed down by Elon Musk’s struggles to get to grips with Twitter after he bought the social media giant for £38billion in October.

Hundreds of billions of dollars have been wiped off the value of his 13.42 per cent stake – and he is no longer the world’s richest man. 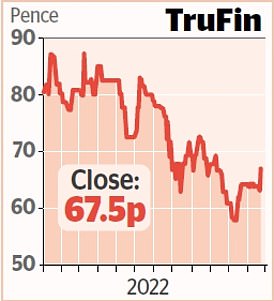 Trufin, a holding company for businesses that specialise in fintech and lending, has rejected an unsolicited offer that valued Oxygen, its early payments platform which helps to speed up the process for councils to pay small businesses, at £26million.

This was rejected because it ‘undervalues the business and prospects of Oxygen’.

Birmingham-based Oxygen has processed more than £1billion of payments since its Freepay scheme launched in 2017.

Musk’s stake is now worth £44billion. Those shares would have been worth £145bn at the peak just over a year ago. The Tesla sell-off came as global markets sank into the red as hopes of a Santa rally before Christmas fizzled out.

Upbeat economic data in the US has set the scene for further aggressive interest rate hikes and major benchmarks around the world drifted lower.

The losses where echoed around the world with the Dax down 1.3 per cent in Frankfurt and the Cac off 0.95 per cent in Paris.

The sell-off came as figures showed the US economy was healthier than previously thought, with output rising at an annualised rate of 3.2 per cent in the third quarter, higher than the previous estimate of 2.9 per cent.

Meanwhile, fewer Americans filed for unemployment benefit than expected. While this upbeat news may be seen as a catalyst for markets to rally, it stoked fears that the US Federal Reserve will raise interest rates aggressively to tackle inflation, hitting investors’ confidence.

‘The economy isn’t quite as close to death’s door as markets had thought,’ said Christopher Rupkey, economist at FWD Bonds in New York.

‘The Fed may well need to raise interest rates even higher in 2023 because the economy isn’t slowing, so upward price pressures may persist.’

Sam Stovall, strategist at CFRA Research, added: ‘The GDP data beat a lot of expectations. There are concerns the economy is not giving up too easily and it’s putting up a fight that will likely require the Fed to keep interest rates higher for longer.’

The upbeat US news contrasted with the UK where output fell by a worse-than-feared 0.3 per cent in the third quarter – putting Britain on the brink of recession.