MARKET REPORT: Sterling hammered by UK energy crisis amid fears shortage of goods and workers could derail the recovery

On a tumultuous day on financial markets from foreign exchange to commodities and equities, the pound sank almost 1.3 per cent back towards $1.35 against the dollar.

That was its lowest level since January. It was also down more than 1 per cent against the single currency, dropping below €1.16.

Sterling slump: On a tumultuous day on financial markets the pound sank almost 1.3 per cent back towards $1.35 against the dollar

The slump came as panic buying of petrol and other issues including a shortage of goods and workers as well as rising prices could derail the economic recovery.

Speaking on Monday night, Bank of England governor Andrew Bailey warned there were ‘hard yards’ ahead for Britain.

At the same time, he said interest rates may well rise before the end of this year as the Bank seeks to tame inflation.

In a sign of further trouble down the line, oil briefly rose above $80 a barrel for the first time in three years and wholesale gas prices reached new all-time highs. 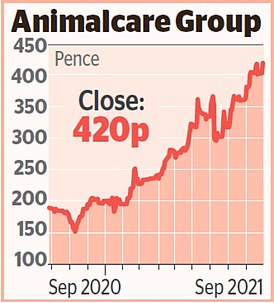 Vet and animal pharma company Animalcare Group leapt higher after hiking its full-year guidance amid a boom in pet ownership.

For the six months to July, the group reported ‘particularly strong’ growth in its companion animals business, which includes dogs, cats and other household pets.

As a result, the company announced yesterday its earnings for the year are expected to be ‘ahead of current market expectations’.

Gas for delivery in winter to British buyers jumped by more than 20 per cent to 218.4p a therm – stoking fears that a cold winter could cripple firms and hammer the economy.

Rising government bond yields also took their toll, with the UK 10-year gilt yield nudging above 1 per cent for the first time since March 2020 at the start of the coronavirus crisis.

Engineer Smiths Group topped the FTSE 100 leaderboard after reporting a rise in profits while also shrugging off supply chain concerns.

For the year to the end of July, the group posted a profit of £372million, up 7 per cent year-on-year, while revenues slipped 2 per cent to £2.4billion.

Looking ahead, Smiths said its order book had good momentum and that it was ‘well positioned’ as markets recovered from the Covid-19 pandemic.

Chief executive Paul Keel, who took the helm in May, said a global shortage of semiconductors, components used in all kinds of electronics, as well as the ongoing crises in energy costs and shipping will not hit the firm as badly as some other companies.

Keel highlighted the group’s local supply chains across the 50 countries in which it operates and said the surge in energy costs would be a ‘tailwind’ for its energy business John Crane, which he said is helping customers ‘navigate the transition from petrochemical to cleaner energy sources’.

The firm also confirmed a binding agreement for the sale of its medical business with US outfit ICU Medical, having announced the deal this month.

Irn-Bru-maker AG Barr lost some of its fizz after warning deliveries of the soft drink could be in doubt. It flagged ‘increased challenges across the UK road haulage fleet, associated in part with the Covid-19 pandemic, impacting customer deliveries and inbound materials’.

The uncertain outlook overshadowed a strong set of half-year results for the group, which reported that profits in the six months to August had risen 43 per cent to a record £24million.

The firm also reinstated its interim dividend at 2p per share in addition to a 10p special payout for investors. Shares fell 3.3 per cent, or 18p, to 521p.

Easyjet saw strong take-up for its £1.2billion cash call, saying investors had bought around 93 per cent of the 301m new shares on offer at 410p a pop.

The budget airline announced the fundraising earlier this month in a bid to repair its balance sheet following a battering during the pandemic. The shares were down 3.5 per cent, or 24.8p, at 684.6p.