Market town premium: Homes are worth £36k more on average

Homes in England’s market towns are now worth £36,000 more than other locations, with buyers typically forking out double for the privilege in the most sought-after spots.

Market town properties are typically valued 13 per cent higher than homes in the rest of their county, according to research from Halifax – but in some areas the premium is much higher.

House prices in the top ten most expensive market towns all average more than £500,000, with Beaconsfield in Buckinghamshire topping the table for the third year running. Its average house price is £1.3million.

Huge premiums: Buyers in market towns such as Wetherby, Alresford, Henley on Thames and Beaconsfield pay hundreds of thousands more than the average in the rest of their counties

There, buyers pay a huge 155 per cent or £690,000 premium compared to other homes in Buckinghamshire.

Market towns are popular with buyers because of their period properties, rural lifestyle and sense of community.

The top three most expensive market towns remain unchanged on 2019, with Henley on Thames, Oxfordshire, (£858,772) and Alresford, Hampshire (£703,371) taking the second and third spots respectively.

But it is buyers in Wetherby that will pay the second-biggest premium, shelling out on average 98 per cent or £196,000 more for their home than elsewhere in West Yorkshire.

What makes a market town?

Many people think that simply having a weekly market is enough for a settlement to be classed as a market town – but that is not the case.

The term actually dates back to the Middle Ages, and was bestowed upon towns that were granted a royal charter giving them permission to hold markets.

They were often at the centre of the local agricultural economy, with people travelling there to buy and sell livestock and other goods.

Housing developed around the marketplaces over time, giving us the market towns that we know today.

Those looking for a home in Keswick in Cumbria will also need to pay nearly double (95 per cent more) for the privilege, as will those wanting to buy in Bakewell in Derbyshire (94 per cent more).

All of the top five market towns have seen their premium rise compared to 2019, as buyers have moved away from cities and sought more space.

The average premium paid for a market town home has increased by nearly £3,000 since 2019.

Some locations have seen bigger jumps in the long term, however.

In Alresford, the market town premium has risen 42 per cent, while in Keswick it has risen 25 per cent and in Stamford, Lincolnshire 24 per cent.

Russell Galley, managing director, Halifax, said: ‘England’s beautiful historic market towns are enduringly popular, which can bring a heavy price tag for prospective buyers, as these areas see house prices 13 per cent above their county averages, equivalent to an additional £36,116. 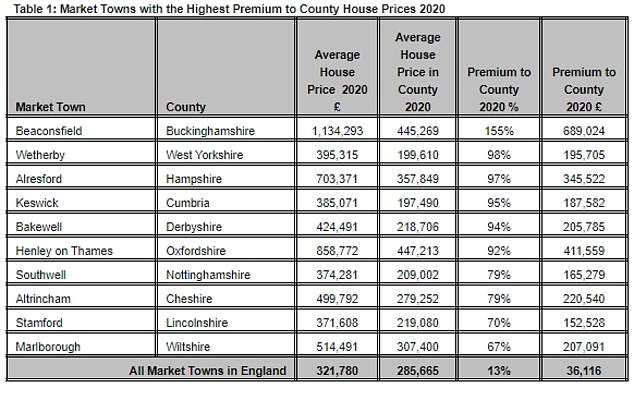 Market prices: These towns command the highest premiums compared to the local area

Southern bias: All of the most expensive market towns are in the South East 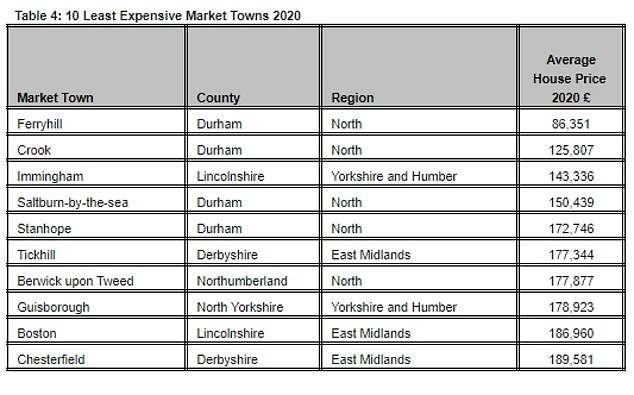 There are some market towns where buyers can bag a bargain, many near Durham

Where can I get a market town bargain?

All of the top 10 most expensive market towns are in the South East or South West of England, according to Halifax.

Altrincham in Greater Manchester had been on the list, but was replaced by Lewes in East Sussex in 2020.

Although they are still more expensive than the local average, Northern market towns can be more affordable, with several coming in below the UK’s average house price.

‘While they might still come at a premium, many market town homes are much more affordable – like Ferryhill and Crook in County Durham where average house prices are under £150,000,’ Galley said.

Of course, those wanting to get all the benefits of a market town without the price tag could always just move in nearby.

Galley added: ‘Anyone looking to make the most of their budget could do well to consider looking at the towns and villages near to a historic market town, which can be close enough to take advantage of all the benefits associated with these areas, whilst perhaps avoiding the premium price tag.’