Marks & Spencer is poised to scale back its French business after stringent European border restrictions left its Paris shops with empty shelves.

Britain’s biggest high street retailer is expected to close stores and may even stop selling its popular sandwiches and chilled food in France altogether.

An announcement could be made in the next few weeks, The Mail on Sunday understands.

The forced retreat will come as a blow to M&S, which relaunched its French business to much fanfare almost exactly a decade ago

M&S has been holding talks with its French franchise partners over the drastic steps after border controls following Brexit delayed lorries and left hundreds of tons of food wasted.

The forced retreat will come as a blow to M&S, which relaunched its French business to much fanfare almost exactly a decade ago.

At the time, its bosses hailed the return with one, the former chairman Lord Rose, bemoaning a previous retreat in 2001 as ‘tragic’.

But the latest plan puts the future of the 20 stores, mostly in Paris, in doubt. The extent of closures is not yet clear, with the final decision on which stores remain resting in part on the commitment of its two French franchise partners.

Earlier this year, M&S overhauled its Czech operation, removing all its fresh and chilled foods from stores and replacing them with expanded ranges of products that have a long shelf life in order to fill gaps.

It is likely that any remaining French stores will follow suit after lengthy border delays meant food arrived past its sell-by date or was turned back to British warehouses.

In July, M&S chairman Archie Norman told The Mail on Sunday that ‘Byzantine’ regulations meant only two-thirds of sandwiches were getting to stores. Most of them only have a shelf life of 48 hours, so even short delays can make them unsaleable.

M&S declined to comment on possible store closures, but a spokesman said last night: ‘In light of the new customs arrangements, we are taking decisive steps to reconfigure our European operations and have already made changes to food exports into Czech Republic. 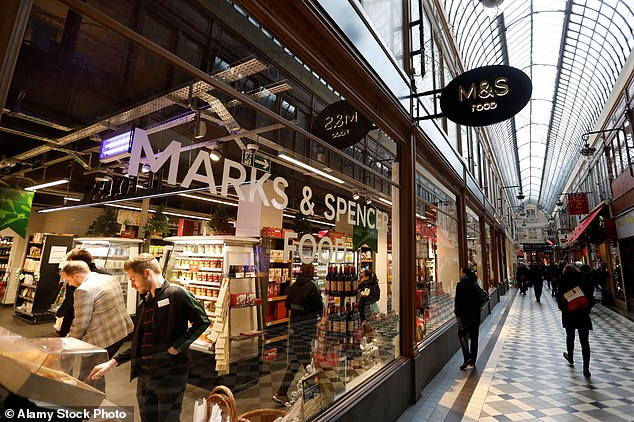 ‘We operate a franchise business in France and are undertaking a review of the model with our two partners.’

The diplomatic row over draconian enforcement of border controls has been branded the ‘sausage wars’. The delays have affected food arriving in Britain from the Continent and consignments shipped to Northern Ireland. The disruption has also left gaps on the shelves of stores there.

Physical copies of export and import documents are required amid reports that officials are demanding up to 700 pages of certification from drivers.

An extension to the grace period before full border checks are introduced in Northern Ireland was announced last week.

But continued delays are expected with checks already in force resulting in some goods, particularly chilled food and meats, not reaching stores.

The extension does not apply to goods passing from mainland Europe, which will be subject to even greater documentation demands from October 1.