Marnie Simpson reveals her son Rox, two, was rushed to hospital with an ear infection

Marnie Simpson has revealed that her son Rox spent the night in A&E after being rushed to hospital with an ear infection.

The former Geordie Shore star, 30, took to her Instagram stories on Tuesday evening to detail her eldest son Rox’s visit to hospital.

She shared a snap of her cuddling her son, two, as they both anxiously waited to be seen in the urgent treatment centre.

Oh no! Marnie Simpson has revealed that her son Rox spent the night in A&E after being rushed to hospital with an ear infection

Alongside the snap, she penned: Spending our night in A&E with Rox bless him! Think he has a ear infection.’

Marnie welcomed her eldest son Rox with her fiancé Casey Johnson, 27, back in October 2019. They then had their second son Oax in May this year.

Earlier this month, Marnie revealed her youngest son Oax, four months, has been diagnosed with Torticollis, a skull muscular disorder which causes the head to tilt.

She wrote in a lengthy Instagram post that she was ‘shocked’ to learn the four-month-old’s condition was ‘severe’, adding that he is currently having physio appointments and will soon get a helmet fitted. 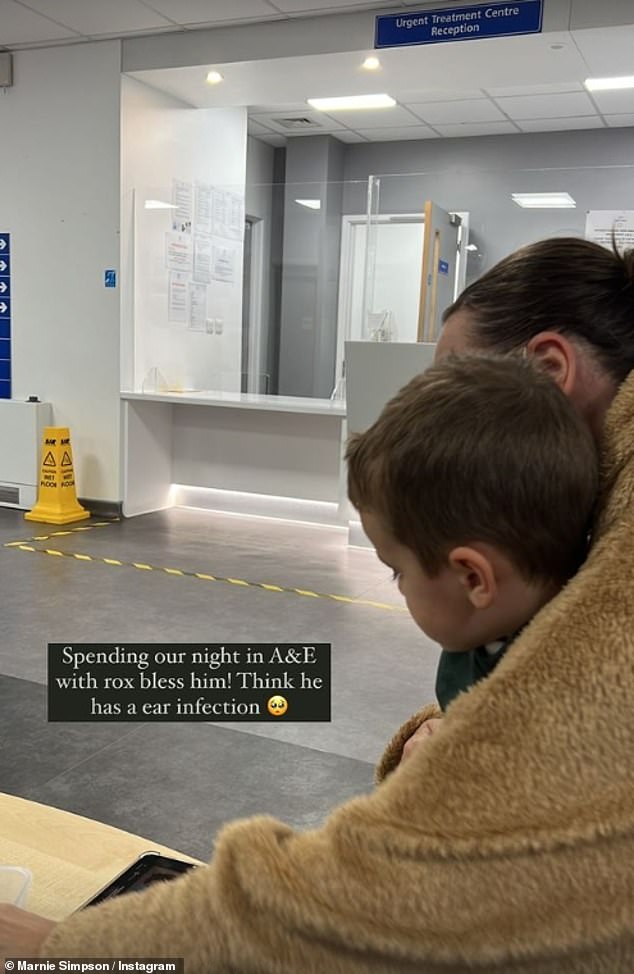 Unwell: The former Geordie Shore star, 30, took to her Instagram stories on Tuesday evening to detail her eldest son Rox’s visit to hospital 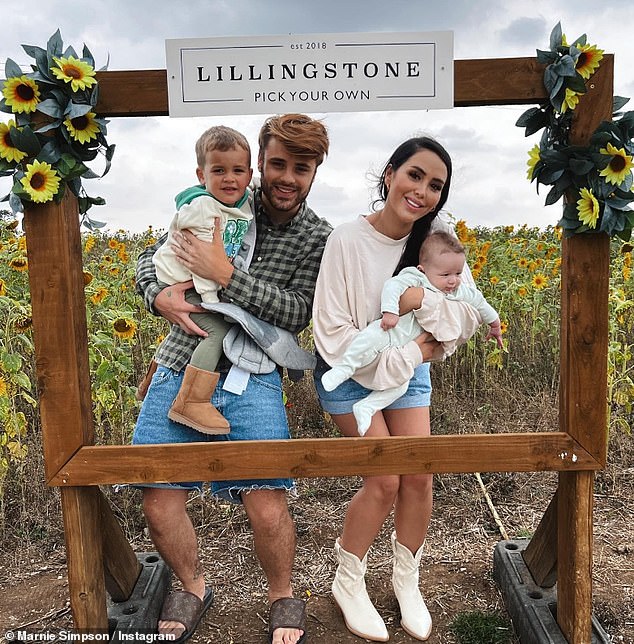 Family: Marnie welcomed her eldest son Rox with her fiancé Casey Johnson, 27, back in October 2019. They had their second son Oax in May this year

She explained last week how the issue was brought on from his position in the womb ‘which has left him unable to move his head left’.

Sharing a photo of the little one, who she shares with her fiancé Casey Johnson and a graph, she began: ‘Hey guys I’ve got so many DMs regarding Oax and his plagiocephaly process.

‘So basically Oax has torticollis from his position in the womb which has left him unable to move his head left.

‘This is hopefully improving with his physio appointments with the osteopath, however this condition has left him with plagiocephaly (the head is flattened on one side, causing it to look asymmetrical.

The reality star added: ‘This can cause the ears to be misaligned and the head looks like a parallelogram when seen from above. 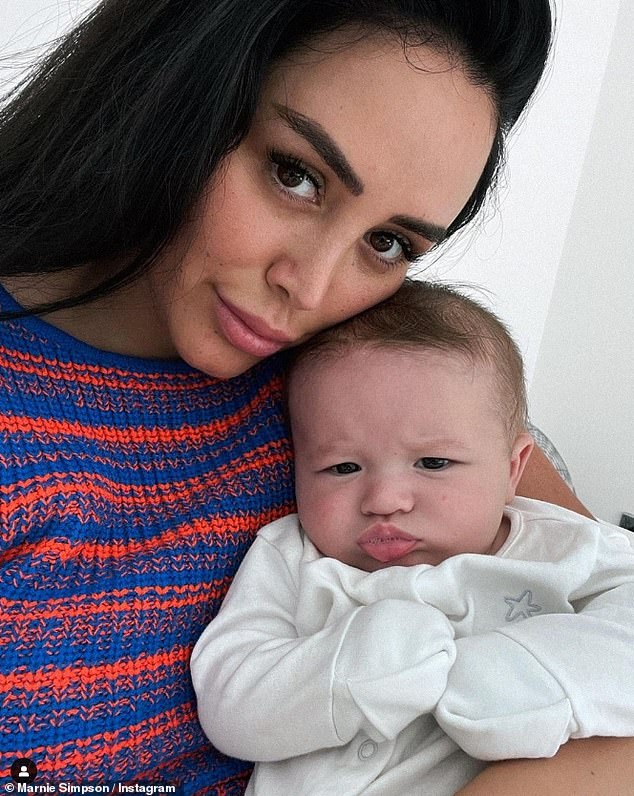 Oh dear: It comes after Marnie has revealed her youngest son Oax, four months, has been diagnosed with Torticollis, a muscular disorder which causes the head to tilt 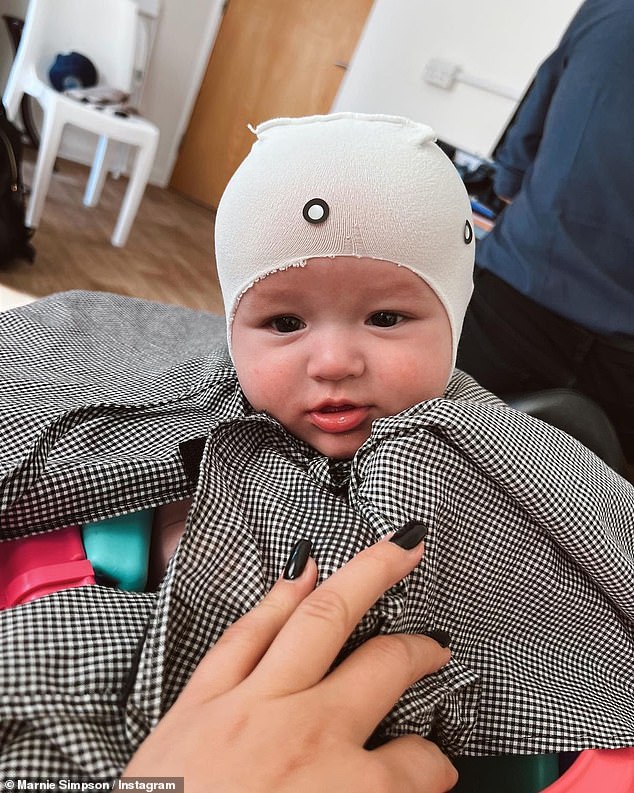 Cute: She wrote in a lengthy Instagram post that she was ‘shocked’ to learn the four-month-old’s condition was ‘severe’

‘Sometimes the forehead and face may bulge a little on the flat side) as you can see on Oax’s graph he’s on the severe side which even shocked me.

‘I’m being open about his process as I know so many parents don’t even know about this issue and it gets left.

‘He’s had his measurements taken yesterday by @technologyinmotion and in 2 weeks he’ll get his helmet fitted.

‘This company was recommended to me by various different places I’ve heard there the best Oax’s head should end up in the yellow/green zone which is fab. 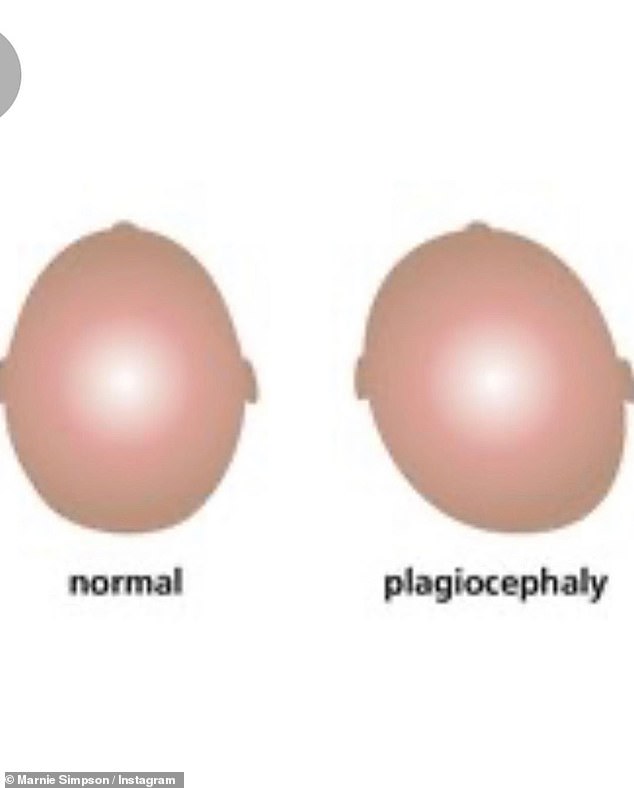 Explaining: She said that he is currently having physio appointments and will soon get a helmet fitted while sharing a diagram 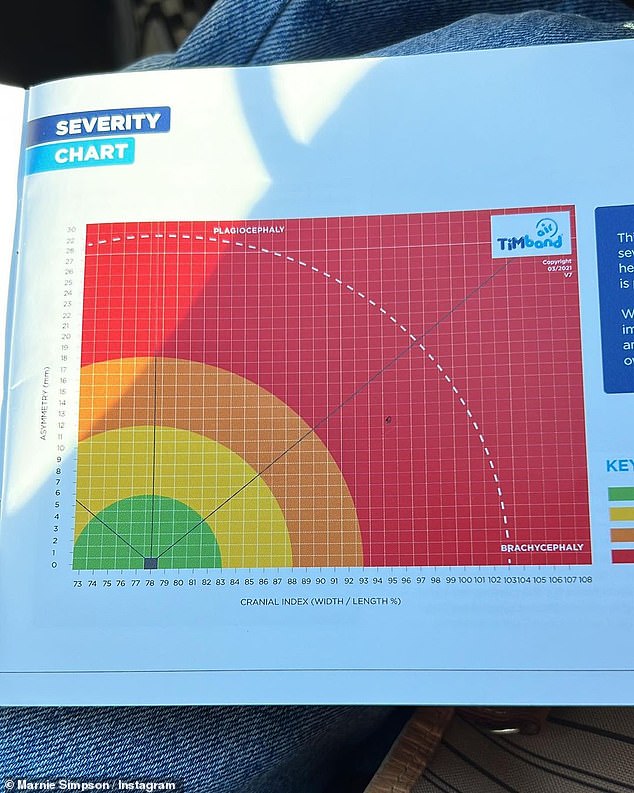 Worrying: Marnie shared a photo of the little one, who she shares with her fiancé Casey Johnson, 27, as well as a graph 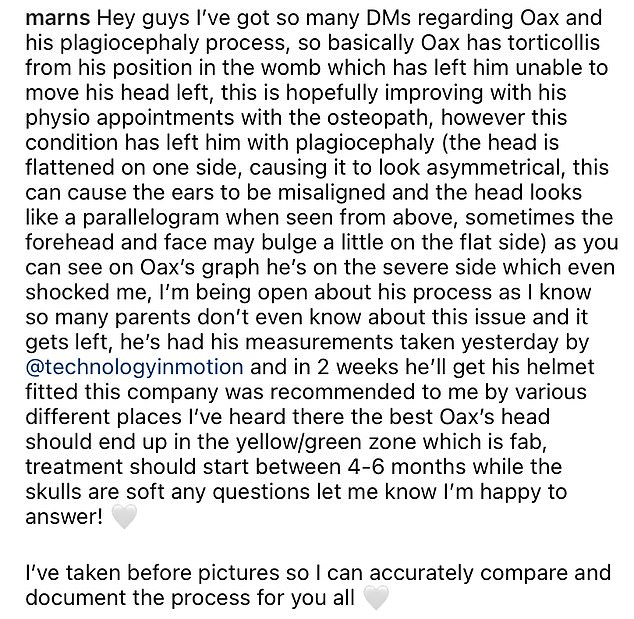 Helping others: The reality star wrote alongside: ‘Hey guys I’ve got so many DMs regarding Oax and his plagiocephaly process…’

‘Treatment should start between 4-6 months while the skulls are soft any questions let me know I’m happy to answer!

‘I’ve taken before pictures so I can accurately compare and document the process for you all.’

Torticollis is the medical term for a twisted neck, which causes the head to tilt.

It can be brought on suddenly by trauma to the spine or neck muscles.

Torticollis can also run in families, which is thought to be cased by involuntary contractions of the neck muscles.

This form of the condition usually develops slowly and appears when a patient is 30-to-50.

Other causes can include an infection of the head or neck, which inflames the lymph nodes in the neck.

The muscles over these lymph nodes may contract, causing the head to tilt.

In rare cases, torticollis can be brought on by tumours, scar tissue or arthritis of the spine.

In the short term, torticollis can be uncomfortable and makes moving the neck difficult.

Other symptoms include oculogyric crisis – when the eyes involuntarily move ‘upwards’ – and protrusion of the tongue.

If severe cases go untreated, the constant tension can cause the muscles in the neck to swell and pressure to be put on the nerve roots.

This has been linked to degenerative spine disease, which occurs when the discs between the vertebrae break down.

Treatments aim to relax the contracted neck muscles, which may include medication or stretching exercises.

In severe cases, surgery may be required to sever the upper neck nerves or muscles to prevent contraction.

This is usually successful, however, the neck can go back to its twisted position after several months.

In very rare circumstances, deep brain stimulation may be necessary.

This involves inserting a wire into the area of the brain that controls movement.

Electrical signals are then sent out to disrupt the process that causes torticollis.

Taking to Instagram in May, Casey revealed their baby boy was called Oax Rubi Johnson, gushing the newborn had ‘completed their family’.

Casey, who already has son Rox with wife-to-be Marnie also shared a sweet image tenderly kissing his baby boy as he revealed the tot’s name.

In the caption wrote: ‘Welcome to the world my boy, Oax Rubi Johnson.

Marnie announced the news she’d given birth on her Instagram page on Wednesday morning, telling fans: ‘Baby boy has arrived safe and sound.’

Marnie, who shared the news with an adorable black and white image of her baby’s tiny hand, wrote: ‘We’re completely in awe, our family is complete.’

Former Union J member shared the post on his Stories and wrote: ‘My boy has arrived.’

The reality personality also took to her Instagram Stories to share more about her birth experience, telling her followers: ‘Guys, baby boy has arrived.

‘I can’t even explain how obsessed with are with him, he’s just perfect. What a different experience that was compared to the birth of Rox, which I’m very grateful for. I can’t wait to show you all, but me and Casey have decided to wait a bit so we can enjoy him ourselves for a little while.’

Marnie then pans to Casey and asks: ‘You’re a dad of two, how does it feel?’ Casey sweetly responds: ‘It’s amazing. I’m just staring at him now and I love him so much.’

In November, Marnie revealed she was pregnant with her second child.

She said: ‘We’re so excited and super happy. It was a bit of a shock but we’re just so thrilled!’

Marnie discovered she was expecting whilst she was filming a new TV show last September and found herself constantly feeling nauseous.

She said: ‘I was filming a TV show in September and we planned on trying after that. But during filming I had really weird symptoms.

‘I constantly felt sick, my gums were bleeding and I felt dizzy, but I just put it down to it being an activity-based show and the fact it was 17-hour days.

‘When I was away filming I was messaging Casey and I told him I felt really sick and my boobs were really hurting. I said it could be because I was running around and my muscles hadn’t been used in that way before, but Casey said he thought I was pregnant.

‘While we were doing that show I also did a bungee jump! Everyone had to do a medical beforehand and when they took my blood pressure it was really low. My blood pressure has never been low so that was a red flag. 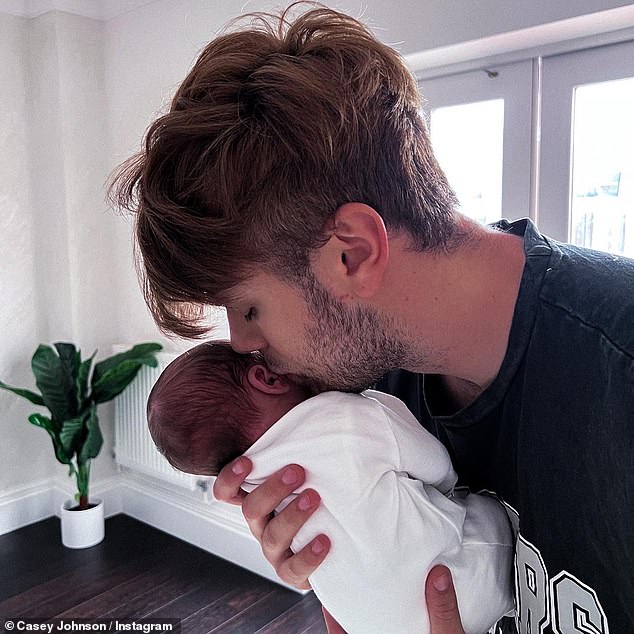 Happy news: Taking to Instagram in May, Casey revealed their baby boy was called Oax Rubi Johnson, gushing the newborn had ‘completed their family’

‘I told Casey and he said, ‘You’re definitely pregnant!’ So as soon as I got back that night I did a pregnancy test and it came up with Pregnant straight away. We just laughed!’

Marnie and her Casey are already parents to their little boy Rox, two, and previously admitted she ‘had a feeling’ it would be another boy.

Speaking to OK!, she said: ‘I don’t feel it was that much of a surprise. I had a feeling I was going to be having another boy when I fell pregnant. Even a psychic predicted it! I guess I always thought it was going to be a boy before I found out.’

Marnie said: ‘That’s the best thing about it. The fact I’ve given him a brother makes me so happy. I would have loved a sister when I was younger, and I love thinking about how they’re going to be best friends forever.’ 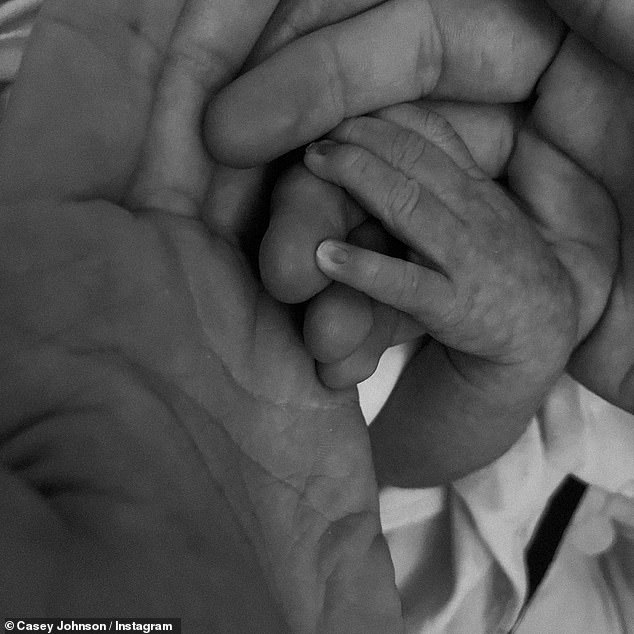 Offspring: Casey shared a picture of his newborn second son on social media as he held his tiny hand

Marnie revealed that severe morning sickness has left her ‘feeling like the walking dead’ during her second pregnancy.

The reality star had been suffering in her first trimester, which has been a shock after a relatively smooth pregnancy with Rox.

She told New Magazine at the time: ‘I’ve been sick out of the car window three or four times. This time I genuinely feel like the walking dead.

‘I can’t even explain how horrendous it’s been. I feel sick all day every day. With Rox I felt so healthy and glowing and I was a ray of sunshine, I was never going to be that lucky again. 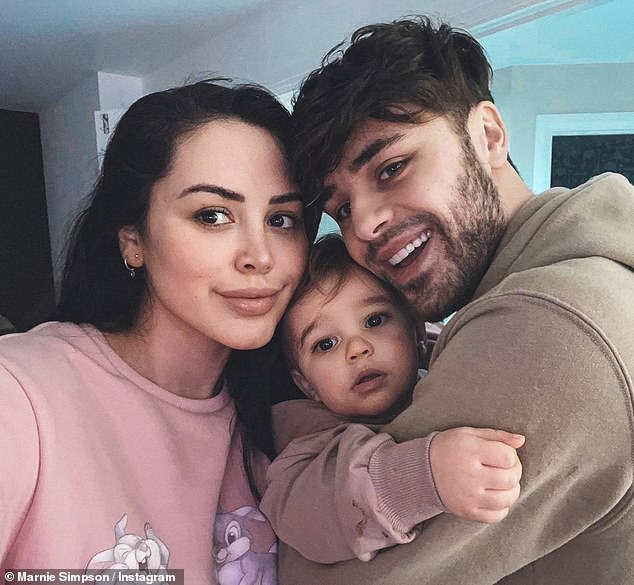 Baby joy: The star previously said she had ‘a feeling’ it would be another boy and that she was ‘so happy’ to give her son Rox, two, a little brother (pictured with Rox and Casey Johnson)

‘I’m older and my body has never been the same since having Rox so I think it was always going to happen.’

The star also discussed suffering from chronic pain due to a UTI after her first pregnancy – which led to bouts of depression.

In the interview Marnie told how the illness was ‘horrible and life-changing’ and that she hated being in that ‘dark place’ before having a surgery which helped her.

She added that she hid her depression from people but did rely on her family to help her get through, adding that she doesn’t know how she would have coped without them.

Marnie went on to explain that the depression contributed to her brief break up with Casey as she pushed her loved ones away. But Casey was there to support her and they eventually rekindled things.

Marnie revealed that she was diagnosed with a chronic UTI in 2016 which got worse after giving birth to her son Rox in 2019.

She said that she ‘had spent ‘thousands of pounds’ on doctors’ consultations’ she was eventually diagnosed with Trigonitis in 2020.

It is a condition where the triangular piece of tissue located in the lower part of the bladder becomes inflamed.

The pair are now set to get married next year or possibly even this summer, with Marnie saying she wouldn’t mind having a bump in her wedding dress. 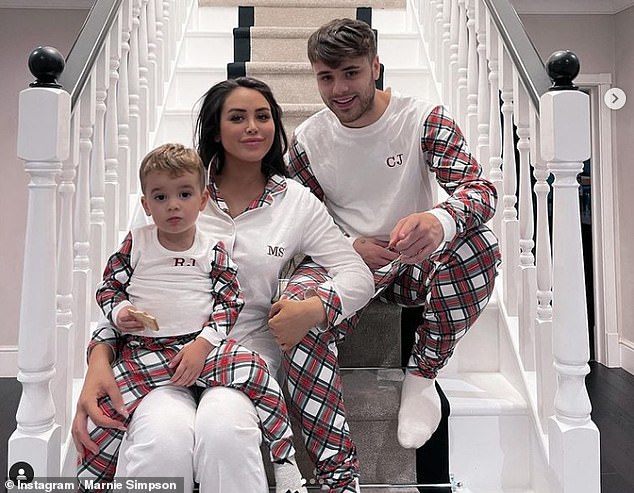 Oh dear: Marnie previously revealed that severe morning sickness left her ‘feeling like the walking dead’ during her second pregnancy (pictured with Rox and Casey)