A senior director at a NASDAQ-traded company is suing his teenage ex-girlfriend after she allegedly lied about her age, exploited him for financial gain, and then threatened to ruin his life after he broke off their seven-month relationship.

In addition, he has requested an emergency order of protection and law enforement in Illinois and Tex, where Lee is from, are involved.

DailyMail.com is aware of the man’s identity but has chosen not to name him here.

The pair began dating after Doe met the then 18-year-old while he had been traveling to Las Vegas for business in early 2017.

Doe claims Lee’s ‘mental instability was not nearly as apparent’ during the course of their relationship as it was after their break-up.

He had provided emotional and financial support for the teen, paying for her ‘car insurance, groceries, and treatments,’ court papers reveal.

Doe, who is described as a ‘technology professional with over 20 years of consulting experience,’ claims he met Lee while he was going through a divorce from his wife of 10 years and ‘was in an emotionally vulnerable state’ and found solace in the girl.

An anonymous senior director at a NASDAQ-traded company is suing his teenage ex-girlfriend Jessica Jiahui Lee (pictured) after she allegedly lied about her age, exploited him for financial gain, and then threatened to ruin his life after he broke off their seven-month relationship 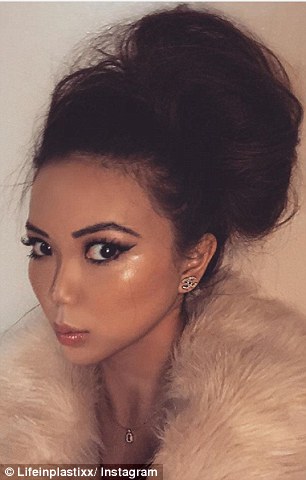 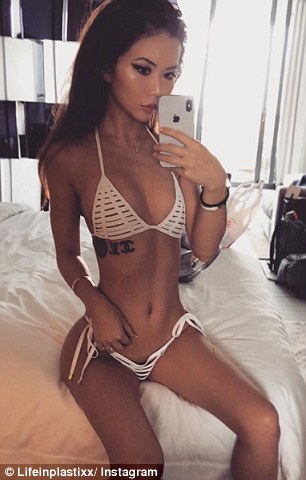 The man identified as John Doe, met Lee while traveling to Las Vegas for business in early 2017. The teen had told Doe she was 25 and worked in consulting, but it was later revealed she is 19 and works as a ‘professional sugar baby,’ the suit states

However, months into the relationship, he says he grew suspicious after he realized Lee’s story was ‘not adding up.’

Doe also claimed that Lee, who is originally from Plano, Texas, had allegedly used aliases and engaged in multiple ‘for-profit relationships’ offering sexual favors to men in exchange for jewelry, clothes, and expensive trips around the world.

After her lies were exposed, the documents claim, the teen manipulated him into taking pity on her by claiming she was a victim of child abuse, struggled with drug addiction, and was suicidal.

Doe eventually ended the ‘toxic’ relationship in September 2017, but what followed were months of retaliation and threats from Lee, including a time when she vandalized his car, the suit states.

‘Lee enlisted the help of others to barrage plaintiff with phone calls and texts demanding financial support, which he flatly refused. The more often plaintiff rejected or ignored Lee’s demands, the more pervasive her threats were toward him,’ the lawsuit read.

‘Lee blamed plaintiff for her likely suicide or need to resort to prostitution after his heartless decision to abandon her.’ 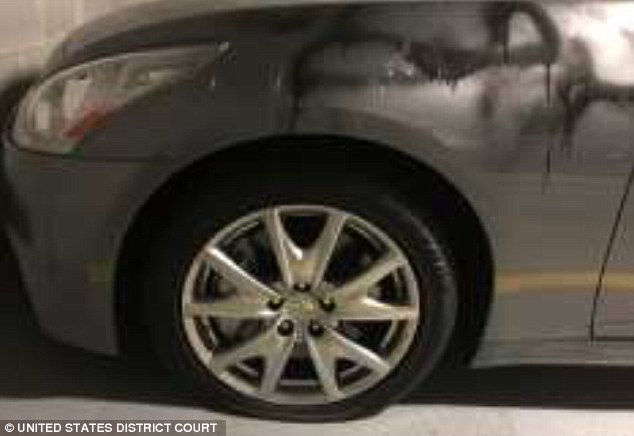 After their breakup, Lee allegedly resorted to retaliation by harassing Doe, creating phony dating profiles under his name, and threatening him. In November, Doe’s building management office notified him that his Lexus had been vandalized in the garage

Weeks after their break-up, Doe alleges he began receiving phone calls and texts from Lee demanding money at ‘all hours of the evening’ which he ignored.

The teen then allegedly resorted to threats by warning she would expose him as a cheater and a rapist, according to the documents

A text message sent to Doe from Lee on October 15 stated: ‘You’re the same guy who ducking [sic] raped me and is cheating on your wife. I’ll make sure everyone knows.

‘And I’ll take care of my own car insurance, groceries and treatments. But I’ll make sure everyone you know and everyone in your whole friend group knows what kind of person you really are. You can go f**k yourself. You are nothing but a piece of s**t same as every other guy. I wouldn’t have done all those things if I were you….’

According to the suit, Lee proceeded to contact Doe’s estranged wife by using a bogus Facebook account and disclosing private information that she had learned during their relationship.

She also told her that Doe had sexually assaulted her so that his wife ‘would have leverage in their division of marital assets’ in their divorce, the suit states.

Doe’s wife filed a complaint against Lee with the San Francisco Police Department.

However, Lee reportedly continued with her retaliation and turned to her social media accounts to publicly shame Doe. 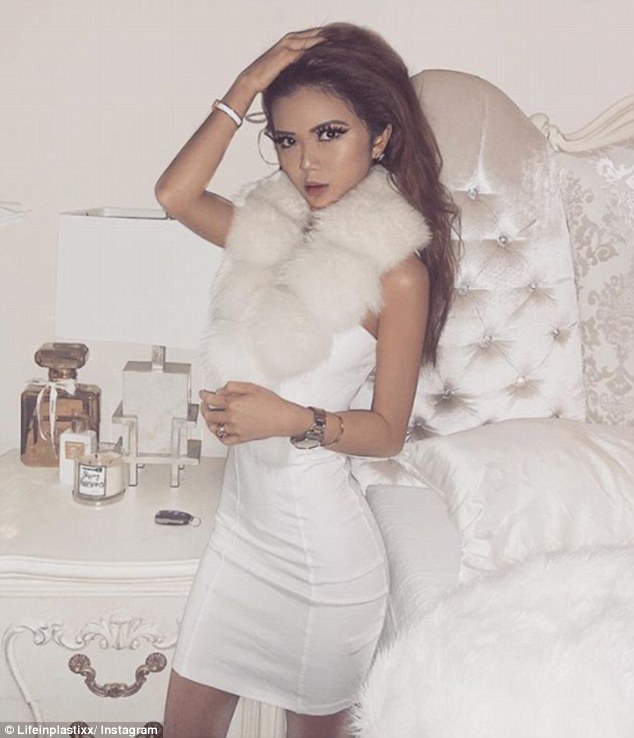 It was later learned that Lee, who is originally from Texas, allegedly used aliases and engaged in multiple ‘for-profit relationships’ offering sexual favors to men in exchange for jewelry, clothes, and expensive trips around the world 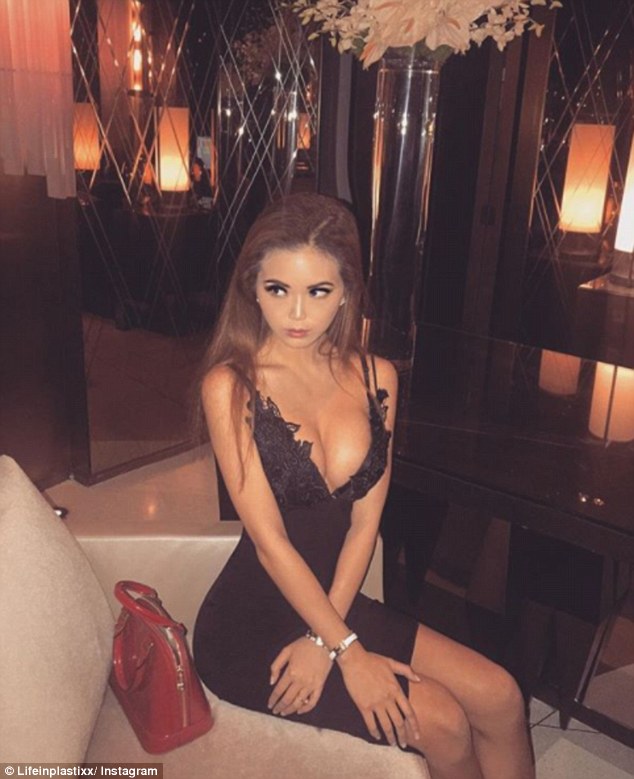 Doe is seeking at least $500,000 from Lee. He had provided emotional and financial support for the teen, paying for her ‘car insurance, groceries, and treatments,’ court papers reveal 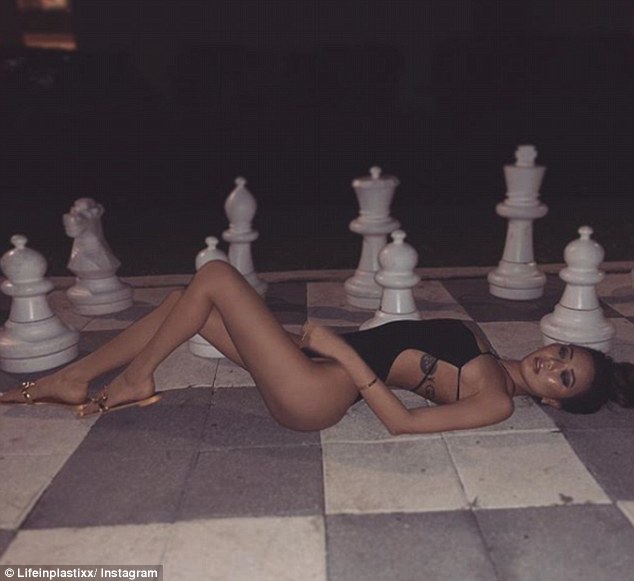 The 19-year-old blamed Doe for her likely suicide or need to resort to prostitution after his ‘heartless decision to abandon her,’ the lawsuit states

A second message from Lee to Doe read: ‘…you ruined your own life [John Doe]. I gave you fair warning what would happen if you disrespected me and threw me away.’

On October 16, the teen uploaded a lengthy and now deleted post detailing her ‘abusive relationship’ to her 30,000 followers on Instagram.

‘Hey followers! Just want to make a quick announcement to every girl (and guy) that follows me. For the past couple of months I was in an abusive relationship and NOBODY knew about it. The people that were close to me could always see that something was bothering me and that I would cry constantly but nobody knew what was truly wrong…,’ she wrote.

‘For example, the second date I ever went on with this guy, I explicitly told him that sex was out of the question and simply not on the table (because he was married at the time but “going through a divorce”) and also because I wanted genuine respect before committing sexually to a guy I barely knew. Yet, after telling him all of this and all the trauma I’d already went through with other guys, he selfishly took my body that night.’ 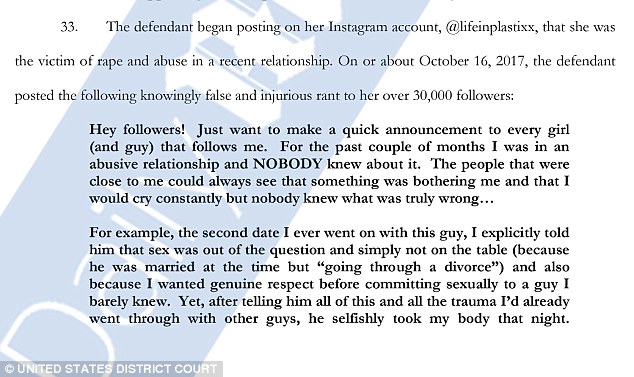 After sending threats to Doe, the teen uploaded a lengthy and now deleted post detailing her ‘abusive relationship’ to her 30,000 followers on Instagram in October

Lee added that her boyfriend would allegedly lash out on her physically and verbally and called her a ‘w***e’ after sleeping with him.

Days later, Lee, or a person believed to be acting for her, created a fake Instagram account using an abbreviation of Doe’s name and followed his friends and family.

‘Lee then posted private, naked photos of the plaintiff on the account’s feed, including some depicting him undressed and exposing his genitalia.

‘These photos were unknowingly taken during an intimate FaceTime session while the two were dating. In fact, the plaintiff had not learned of the existence of these photos until she used them to harass and humiliate him,’ court papers state.

Doe claims that Lee continued with her rampage by creating phony online dating profiles of him and posting a solicitation of him on Craigslist titled: ‘FIND THE MAN WHO RAPED MY 9 YEAR OLD DAUGHTER,’ with his phone number.

Lee also took to LinkedIn to create an account in Doe’s likeness using Doe’s genitalia as the profile photo in an alleged attempt to humiliate him in the workplace.

She identified his employer on his profile and wrote: ‘I hate working for [employer omitted]!! I also hate my clients!!!! I am also very drunk,’ court papers read.

‘The profile goes on to identify specific clients by name, accuse him of infidelity, and it included a personal note to a professional colleague disparaging her capabilities.’ 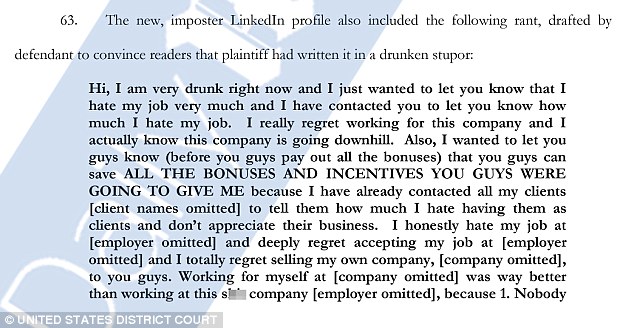 Just days later, she also took to LinkedIn to create an account in Doe’s likeness using Doe’s genitalia as the profile photo in an alleged attempt to humiliate him in the workplace 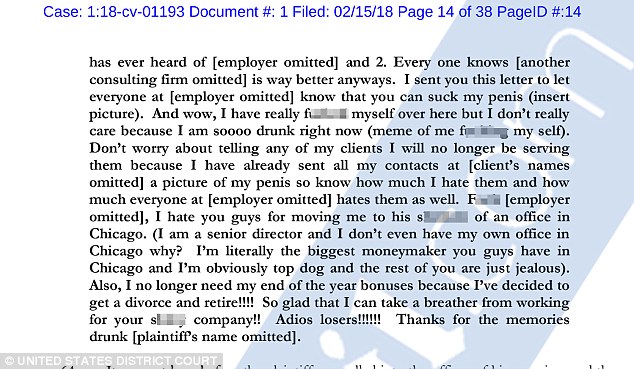 The documents claim that Lee created fake profiles on Tinder and OK-Cupid using Doe’s likeness, real name, cell phone number and other personal information. Lee identified him as ‘a male seeking other males,’ and ‘it is believed she solicited risque pictures as a precursor to any in person encounter.’

Her alleged cyberbulling continued with a Craigslist solicitation that ‘ a 45-year-old man raped my 9 year old daughter,’ accompanied by a $1,000 reward.

The Doe received two Life Lock alerts concerning an inquiry into his credit information. It is believed Lee attempted to apply for a loan or credit card using Doe’s name and personal information.

In late November, after learning that Doe had filed for an order of protection, Lee allegedly contacted him begging he withdraw the petition.

‘We live literally states apart. We’ll never see each other again. So please just drop it and save yourself some money and time. I’m truly sorry for every embarrassment I’ve caused you. It was all my fault, everything was my fault, I’ll take the blame, all I want is for you to drop this,’ a text message read.

But that same morning, Doe’s building management office informed him his car had been vandalized.

Security footage showed Lee entered the building with an ‘unsuspecting resident’ that allowed her to get into the garage.

‘Lee then punctured three of his four tires, used a sharp item to scratch all four quarter panels of the vehicle, inserted super glue into the locks and spray-painted swastikas in black on several panels of his car,’ documents state.

Shortly after, Doe hired a legal team and sent a formal notice to Lee.

According to court papers, Lee has contacted Doe from ‘untraceable’ phone numbers as recently as February 1.

‘The plaintiff harbors a reasonable fear for his own personal safety, and the safety of those around him, in light of Lee’s escalating, unpredictable, and unexplainably vindictive behavior following a mere seven month dating relationship that simply did not work out,’ his attorneys state.

They are also demanding a trial by jury and damages for emotional distress.