A married couple were jailed today for carrying out genital mutilation on their one-year-old daughter in Ireland’s first ever FGM case to be heard in court.

At Dublin Circuit Criminal Court today, Judge Elma Sheahan, sentenced the 37-year-old man and 27-year-old woman to a combined sentence of over 10 years in prison, for carrying out one act of FGM at a Dublin address in 2016.

The parents, who come from an African country, cannot be named to protect the identity of the baby girl.

An undated file photo shows an Irish Garda (police) car parked in Wexford. Police searched the home of the 37-year-old man who brought his daughter to the hospital with vaginal bleeding. The toy that he’d claimed she fell on to had no traces of blood on it

On the date of the offence, the man had taken his daughter to hospital complaining of blood coming from her vaginal area. He claimed the bleeding had started when the one-year-old fell backwards on to a toy at the Dublin property.

After having inspected the youngster, medical staff assessed that the injuries could not be accidental and the Gardai were called to search the suspect’s home.

During the operation they recovered the toy the man said was the culprit and found no traces of blood.

Dr Sinead Harty, who gave evidence at the trial, said the injury was consistent with a surgical severing of the victim’s clitoris.  She said that the type of injury could not have been an accident.

The defendants had both plead not guilty to the charges and the man, who received a five and a half year sentence, said that he did not agree with FGM during interview.

The mother, who was caged for four years and nine months, said that she had been a victim of the practice herself.

Both were jailed when the jury returned a guilty verdict after three hours this afternoon. 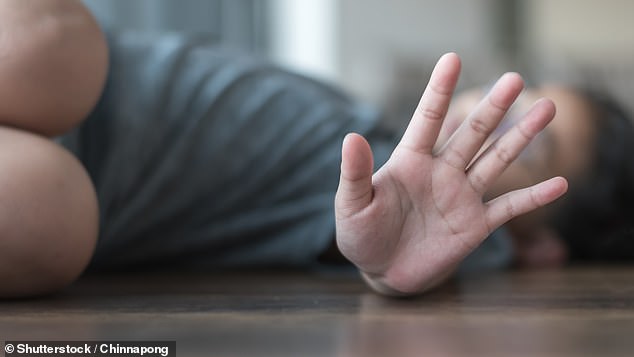 A stock image shows a child holding her hand to the camera. FGM has been an offence in Ireland since legislation was introduced in 2012

‘It sends a strong and important message that Female Genital Mutilation, the mutilation of children and young girls, is not and will not be tolerated.

‘It is a heinous and barbaric practice which is a criminal offence in Ireland.’

The mutilated youngster is now in the care of her maternal aunt with her two siblings.

FGM has been an offence in Ireland since legislation was introduced in 2012.