Married to a joyless fanatic

The father-to-be was distracted – and anxious. His wife Claudia was due to give birth to their first child at the Royal Free Hospital in Hampstead, and Jeremy Corbyn headed for the telephone outside the delivery room.

If his old friend and constituency agent Keith Veness was surprised to get the call, he was even more startled by what Corbyn – running for re-election as an MP in the 1987 General Election – had to say.

‘I’m really worried,’ the lifelong Marxist many believe will be Britain’s next Prime Minister complained as his new wife lay in a hospital bed preparing to bring their baby son into the world. ‘We haven’t put out that leaflet about Northern Ireland.’

‘Haven’t you got something more serious to worry about?’ asked Veness.

‘You’re about to be a father. I’ve never heard of anyone who lost an election because they didn’t get a leaflet out.’

But then Jeremy Corbyn has never done family life like everyone else.

When Claudia tried to hire a cleaner, Corbyn’s friends asked if his wife had ‘bourgeois tendencies’

He met Claudia Bracchitta, the fiercely intelligent and good-looking daughter of Chilean exiles, the previous year at a protest meeting against her homeland’s military dictatorship, addressed by Ken Livingstone.

‘She wanted to get off with me,’ Livingstone later ungallantly recalled, ‘but I had to go off to meet Kate, my partner, so she went for Jeremy.’

Claudia was already married, but by the following year she was pregnant with Corbyn’s child and rushed through a divorce to marry her new admirer.

Neither of Corbyn’s parents was present at the wedding: his father had died the previous year and his mother was not invited.

In fact, he didn’t tell even his close friends about his marriage.

Within little more than a decade the relationship was dead, killed not by, as they told the world, principled political differences about whether to send their son to a grammar school – but by Corbyn’s financial incompetence, his neglect of his family, his arid lifestyle and his apparent misogyny.

‘I’ve got all these debts,’ Corbyn told his long-time friend Reg Race as they sat in the spartan living room of the politician’s semi-detached house in North London in late 1996. ‘Can you work out why?’ 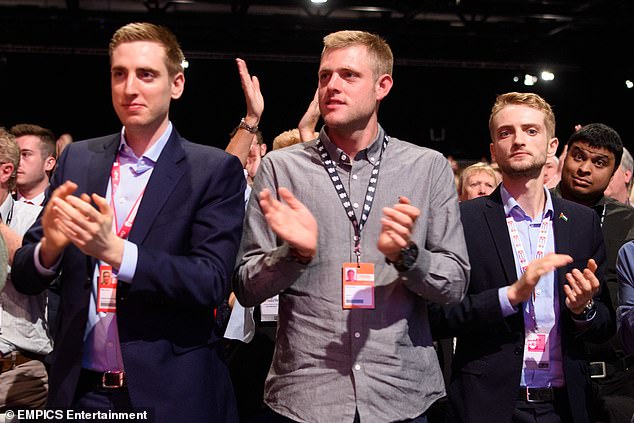 ‘I don’t need to be a genius to tell him what’s wrong,’ Race thought. ‘He’s in danger of bankruptcy.’ Across the room sat his host and Claudia, positioned unnaturally far apart. Race, a former hard-Left MP who’d transformed himself into a successful financial consultant, had been summoned by Claudia as a mutual friend to solve their differences.

The papers in front of him showed that the Corbyns owed their bank £30,000, the equivalent of twice that figure today. Several personal loans had been guaranteed by Corbyn’s income as an MP – and he was also burdened by high mortgage repayments.

As a last resort, the bank could threaten to recover its money by seizing his home. ‘You’ve run out of loans,’ said Race. Unchecked, within five years the debts would be £100,000. Corbyn’s annual salary was £43,000. Claudia interrupted. This was entirely the result of her husband’s folly, she said. She and their three young sons – Sebastian, Benjamin and Thomas – had little money even to buy food and clothes. ‘We can’t afford a decent life.’

The principal cause of the debts was the Red Rose Community Centre in Holloway – a bar and dance area on the ground floor of a building that fulfilled his commitment to open his party office in his North London constituency. Corbyn was paying its rent and some staff salaries out of his own pocket. Simultaneously, he owed a large sum to the Inland Revenue for his employees’ unpaid National Insurance and pension contributions.

The financial chaos was matched by his management style. His employees complained about being both undervalued and underpaid.

Among the casualties was Liz Phillipson, his battle-scarred assistant, who had resigned rather than continue to tolerate Corbyn’s fecklessness. ‘You haven’t got enough money for what you’re doing,’ Race said bluntly. ‘You should close your office and move to the Commons.

He was not surprised by the tension. Throughout their marriage, Corbyn’s lack of interest in material things had meant that he ignored her need for comfort. 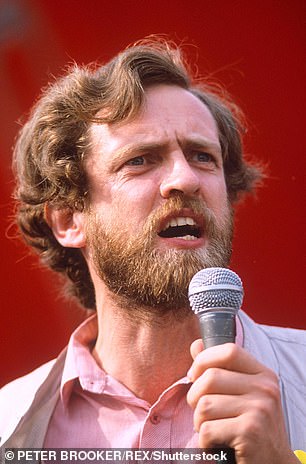 Debt-ridden: Jeremy Corbyn in the 1980s

At one stage she had planned for the family to move from Islington to leafy Kingston upon Thames, but was quickly disabused of the idea. ‘He has to live in his constituency,’ a political aide told her.

She got the same short shrift from her husband when she tried to hire a cleaner – a move that prompted one of Corbyn’s friends to question whether his wife had ‘bourgeois tendencies’.

To Corbyn, Claudia’s list of complaints was familiar. Over the years, a succession of women had made the same observations: he never changed his ways, and he rarely thought about them.

He wore the same shabby clothes, ate the same bland food and stuck to the same dogmatic political convictions he first developed as a teenager.

Admirers hailed his inflexibility as proof of his integrity. Detractors blamed his limited intelligence and lack of education for his failure to appreciate others.

Long before the onset of their financial problems, life with Corbyn had proved difficult for Claudia. Labour MP Tony Banks witnessed just how difficult as one day he walked into Westminster’s central lobby and spotted her standing by the wall, tearfully holding her children.

Jeremy, Claudia explained, had promised to meet her two hours earlier. He had not turned up. Banks took the four Corbyns to the Commons family room and went off in search. Eventually he found Corbyn in a committee room. ‘You’d better come out and look after your children,’ he suggested. Corbyn did not seem fazed for a moment. Banks was not surprised. ‘When pushed to have a day off,’ he recalled, ‘Jeremy’s idea was to take his partner to Highgate Cemetery and study the grave of Karl Marx.’

His old friend Reg Race had experienced something similar when he had invited the Corbyn family for a week’s holiday at his country home in Derbyshire.

On the day, Claudia arrived with the children.

‘Where’s Jeremy?’ asked Mandy, Reg’s wife. ‘I don’t know,’ replied Claudia with sadness. ‘He just told me, “I’ve got to go to a meeting”, and I haven’t seen him since.’

Over the following 36 hours, Claudia called several numbers searching for her husband. Two days later he turned up, explaining his absence as a necessary sacrifice for ‘the movement’.

By the time Race was called in to help resolve Corbyn’s financial crisis, the marriage was all but over. 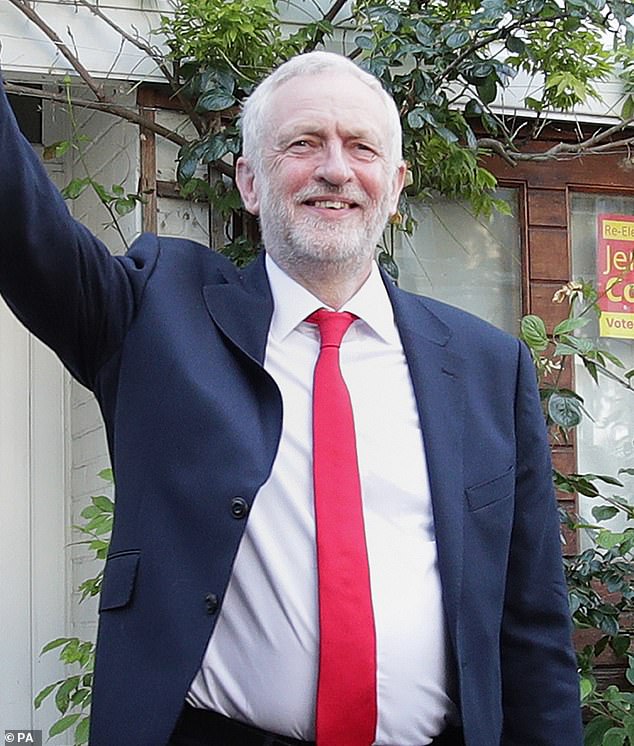 Corbyn had regularly picked wood from neighbourhood skips, and also collected railway junk as he criss-crossed the country on trains

That afternoon Race told his friend that he had little choice but to sell the family home.

Claudia agreed. Reluctantly, so did Corbyn – and thereafter broke off his relations with Race. The messenger was to blame, a failure to take personal responsibility that left Race to conclude of the man he’d worked closely with over three decades: ‘He’s not fit to be leader of the Labour Party, and not fit to be Britain’s Prime Minister.’

On the day of the move, Corbyn was told by Claudia to empty the fridge. He forgot. He also forgot to clear the garage. Late in the afternoon, while their former home’s new owner fumed on the pavement, the garage door was opened to reveal rubbish crammed to the ceiling.

Corbyn had regularly picked wood from neighbourhood skips, and also collected railway junk as he criss-crossed the country on trains. Boxes of safety lamps, metal signs, track signals and other paraphernalia had been stuffed in any old how. Late in the day, everything was finally shuttled across to the basement of Mercers Road, creating a new world of clutter.

The move brought one advantage. The building had been converted into bedsits, making the estrangement between Claudia and Corbyn easier.

She and their three sons took the top floors, where she lived with a young South American dubbed ‘the toy boy’, while Corbyn, in the basement, had relationships with a series of younger women.

The Labour leader has always done his best to conceal his chaotic personal life from the media – which he loathes. His break-up with Claudia was no different, shrouded as it was with obfuscation and lies.

Late in 1999, while Corbyn was at a peace conference in The Hague, a journalist contacted his wife and asked whether the two had separated. She said their 12-year marriage had ended in 1997. She said she had wanted their 11-year-old son Ben to go to Queen Elizabeth’s grammar school in Barnet, but that Corbyn had stipulated that he should go instead to Holloway School, a failing local comprehensive.

From The Hague, Corbyn confirmed Claudia’s account. Defending his ideological purity against selective schools, he implied, was more important than his son’s education – or his marriage.

In a series of interviews, Claudia reinforced the same message. ‘My children’s education is my absolute priority, and this situation left me with no alternative but to accept a place at Queen Elizabeth Boys’ School. I had to make the decision as a mother and a parent… It isn’t a story about making a choice, but about having no choice.’

To the public, Corbyn appeared to have acquiesced in his wife’s wishes, but, like so many communists, he had put his political principles first, and ended the marriage: he could not live with a woman who did not accept his beliefs.

The only dent to that image of ideological purity was Claudia’s revelation that Corbyn had agreed for another of their sons to spend two years at the local Montessori nursery, at £600 per term.

If that had been the last word on the subject, the notion that the marriage had broken up over Corbyn’s principles might have been plausible. But Claudia, possibly with Corbyn’s encouragement, went further. ‘He is first the politician and second the parent,’ she said. ‘It’s very difficult when your ideals get in the way of family life… It has been a horrendous decision.’

Sixteen years later, the whole tale was expanded. Rosa Prince, Corbyn’s semi-authorised biographer, described, with Claudia’s help, a tormented family: ‘Corbyn and Bracchitta went round and round in circles for months.

‘She would not send Ben to Holloway School and Corbyn could not bear for him to go to Queen Elizabeth’s… In choosing Queen Elizabeth’s, Bracchitta was aware that she was ending her marriage.’

Is this version correct? Friends say the marriage ended because of Corbyn’s behaviour – his financial fecklessness, his thoughtless absences and his selfish refusal to do anything to make his wife’s life more pleasant.

‘He told me that the marriage had ended long before the school bit,’ Ken Livingstone recalled. ‘We had a chat at the time and he said his marriage had fallen apart over other things, not the school.’

Livingstone had discovered that Corbyn’s ‘authenticity’ was fictitious – a confection for political appearances. Like his great hero Lenin, the Labour leader had mastered a critical ruse to grab public support: ‘A lie told often enough’, wrote the Soviet revolutionary, ‘becomes the truth.’ Few politicians have deployed this tactic as ruthlessly and effectively as Jeremy Corbyn.