‘Out-of-this-world’ ringtones — made through a musical interpretation of the weather patterns on the planet Mars — have been released by NASA.

Once this ‘data sonification’ process was complete, flautist and musicologist Alyssa Schwartz of the Fairmont State University in West Virginia brought the piece to life.

From her rendition, snippets were sampled to produce ringtones, which can be downloaded from the NASA website.

An ‘out-of-this-world’ ringtone — made through a musical interpretation of the weather patterns on the planet Mars, pictured — has been released by NASA

‘With the growing interest in Mars exploration, there is a pressing need to study and predict the planet’s weather, and that is what the incredible Pleiades supercomputer is able to do,’ said physicist Domenico Vicinanza of the Anglia Ruskin University.

‘We’ve used real scientific data to create real music, so that Alyssa is, in effect, playing the shape of Mars clouds in motion, as predicted by the supercomputer.’

Pleiades — one of the most powerful supercomputers in the world — is used by NASA to forecast the weather on Mars.

Mars has the largest dust storms in the entire solar system, which can last for several months and cover the entire planet.

The researchers used an imaging tracking system to study the movement of cloud formations predicted by the supercomputer — from which patterns were filtered out and mapped onto musical intervals, producing a piece that Dr Schwartz could play.

‘I’m particularly proud of this project because the extraction and modelling techniques we’ve used with the NASA data are the same that we use in our own academic research,’ explained Dr Vicinanza.

‘The model allows data scientists to study complicated, nonlinear data and extract “regularities” — or patterns — in that data.’

‘It has a variety of practical uses including studying large quantities of health data, economic forecasting and, of course, making music.’ 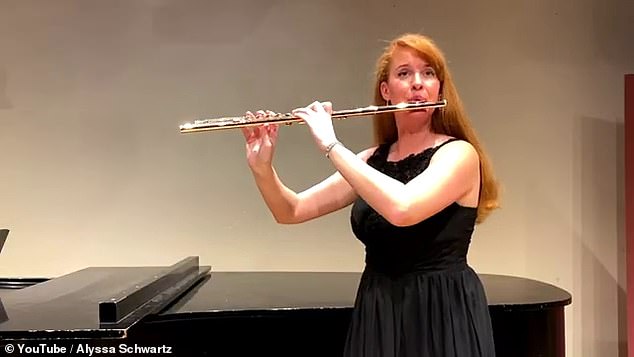 Researchers used the Pleiades supercomputer at the space agency’s Ames Research Center in California to turn predicted Martian cloud movements into sound. Once this ‘data sonification’ process was complete, flautist and musicologist Alyssa Schwartz (pictured) of the Fairmont State University in West Virginia brought the piece to life

Alongside the ringtones, the team have also released matching text alert sounds, which were composed based on the central processing unit capacity of Pleiades.

Pleiades is hundreds of thousands of times faster than a basic home computer — sporting a whopping 246,048 CPU cores and 900 terabytes of memory.

The ringtones were prepared in advance of the International Conference for High Performance Computing (SC20), which is taking place later this month.