A chef who is set to join Mary Berry on a new cooking show has apologised after old messages where he made gay jibes on Twitter emerged.

It was announced last week that Mary Berry will be joined by chef Dan Doherty and presenter and greengrocer Chris Bavin to judge a new BBC cooking competition.

But tattooed Doherty, who is currently chef director at restaurant Duck and Waffle and recently released a book, has been forced to apologise after tweets from 2013 and 2014 emerged where he told a follower: ‘I’d retweet that if you weren’t all gay and private’ and said to another ‘Don’t be gay.’

The Sun reports in another public tweet he called fellow chef Tom Cenci a ‘c***’ for posting pictures of him online ‘looking like a rejected member of the village people’.

He has now apologised for the messages, and said: ‘I would like to apologise unreservedly for the language used in these tweets from four years ago and have now deleted them.’

He added: ‘These tweets are not a reflection of my beliefs and I deeply regret any offence caused.’

It was announced last week that Berry, a former Great British Bake Off favourite, will star in Britain’s Best Cook, a new competition that will see 10 skilled home cooks from across the country face a comprehensive range of culinary challenges over eight episodes. 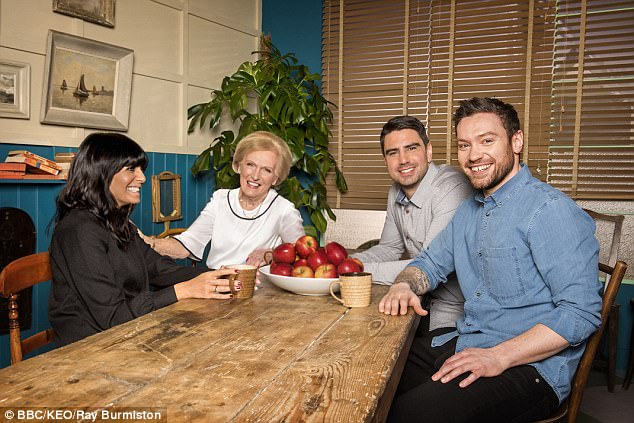 It has already been announced that Strictly Come Dancing host Claudia Winkleman will present the new series.

Doherty recently released his second book focused on the recipes he cooks at home for family and friends and says he will be on the hunt for inventive home cooks with hidden kitchen talents.

‘Like our contestants, we each have different backgrounds and ways of looking at food. I have to admit the boys have already taught me a thing or two!’