Mary J. Blige dazzles in a rhinestone corset as she performs on stage for Good Morning Gorgeous tour

Mary J. Blige gave the performance of her life on stage as part of her Good Morning Gorgeous tour in Detroit earlier Saturday night.

The 51-year-old talented singer made a show-stopping entrance wearing a shimmering bustier and rhinestone boots.

The Grammy award-winning performer began her nationwide tour in the United States earlier this month on September and will conclude towards the end of October.

The Family Affair hitmaker confidently sang on stage to a sold-out crowd of cheering and devoted fans that filled the Little Caesars Arena in the heart of the city.

She donned a shimmering bustier that had glittery boning on the entire piece. The star added a pair of black velvet shorts to complete the look.

Mary slipped into a pair of rhinestone-covered heeled boots that sparkled under the bright stage lights.

Her blonde hair was parted in the middle, and flowed down past her shoulders in stylish waves. 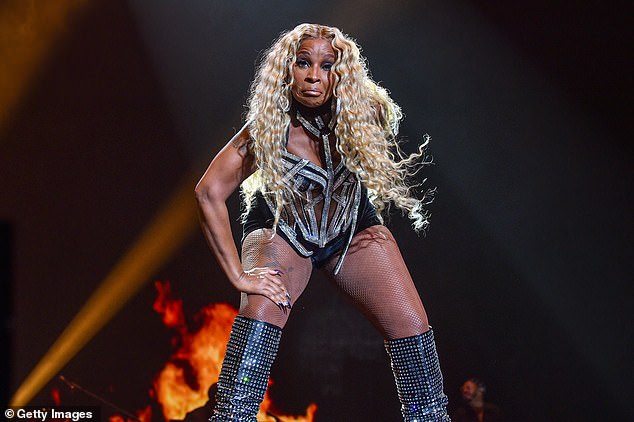 Having fun: The Grammy award-winning performer appeared to be having a blast as she performed on stage for her Good Morning Gorgeous tour

Her makeup coincided with the color scheme of her ensemble and comprised with a layer of dark eyeshadow along with black mascara. She added nude-colored lipstick to complete her look.

According to the Detroit Free Press, it was the singer’s first time stepping into Little Caesars Arena, and had been 10 years since she had performed in the heart of Detroit.

The star held a gold microphone in her hand as she sang a mix of her older hits and newer songs from her latest 2022 album called Good Morning Gorgeous.

When talking about the creative process of putting the album together, Mary explained to Good Morning America, ‘It’s a positive affirmation,’ she stated in reference to the name of the album.

‘I had to speak over myself when I was in a really dark situation. I had to learn how to love myself out of a negative place. I learned that positive words, and to speak positive words over yourself, you manifest positive things in your life.’ 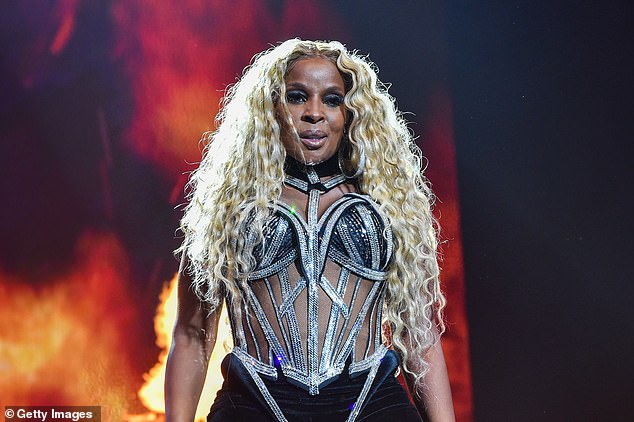 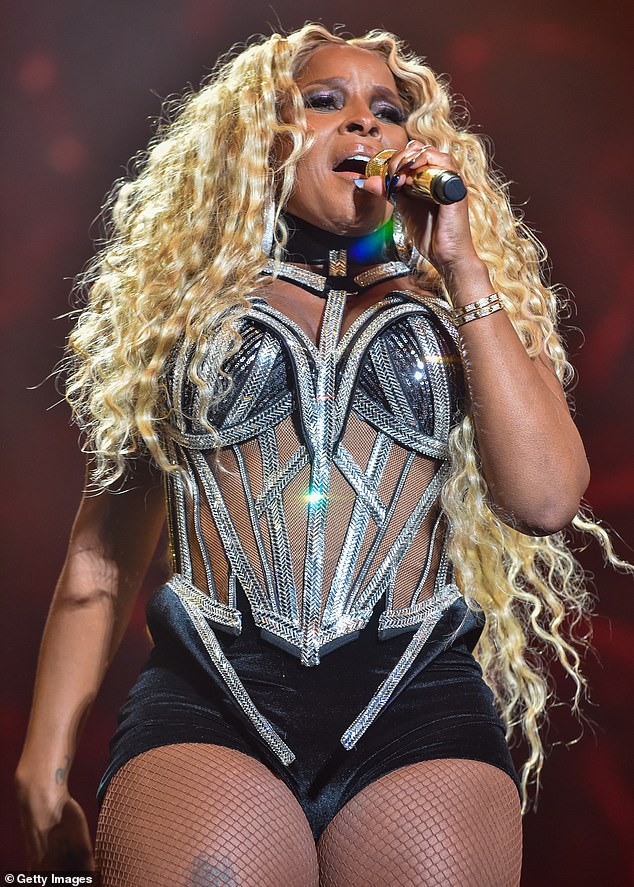 Talented: Earlier this year, Mary had the chance to step onto the stage and perform during the Super Bowl LVI Halftime Show with other artists such as Eminem and Dr. Dre

The Queen of Hip-Hop Soul made a memorable appearance to perform alongside other artists such as Eminem, Dr. Dre, and Kendrick Lamar during the Super Bowl LVI Halftime Show earlier in February.

She was the recipient of an Emmy award for the performance for Outstanding Variety Special at the 2022 Creative Emmy Awards. Mary shares the award with the other music artists who performed on the large Super Bowl LVI stage.

‘I don’t even have the words to explain how full and how huge of an accomplishment that was. I just felt so strong,’ she told Apple Music 1 during an interview when discussing her performance. 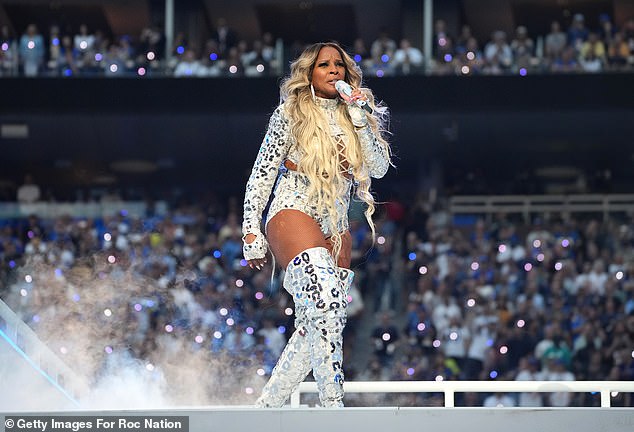 Passionate: The Queen of Hip-Hop Soul made a memorable appearance to perform along other artists such as Eminem, Dr. Dre, and Kendrick Lamar during the Super Bowl LVI Halftime Show in February 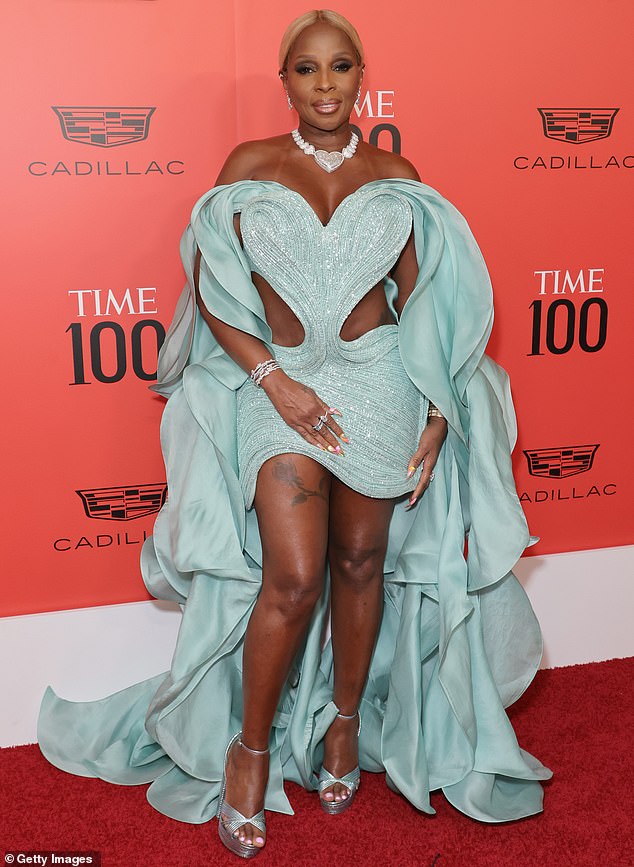 Successful: Throughout the course of her music career, Mary has been awarded a total of nine Grammys, and nominated for 31; seen in June in NYC 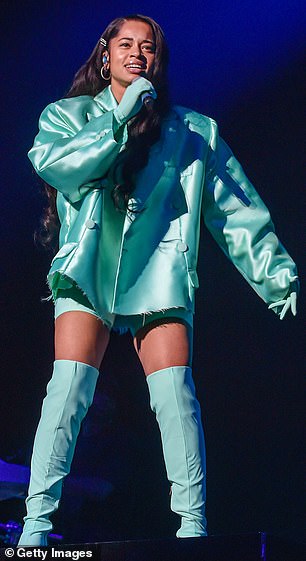 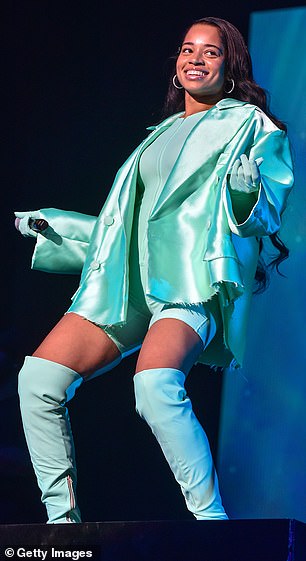 During her concert performance on Saturday night in Detroit, other special artists had joined her on stage.

Queen Naija, who was mainly raised in the city of Detroit, also performed on stage to set up Mary’s performance. She wore a nude-colored pant suit covered in shimmering rhinestones.

The Good Morning Gorgeous tour began on September 17 and will continue nationwide until the end of next month on October 29. Some of the various cities she will perform in include Chicago, Las Vegas, Atlanta, and Brooklyn.

Glamorous: Queen Naija, who was mainly raised in the city of Detroit, also performed on stage to set up Mary’s performance 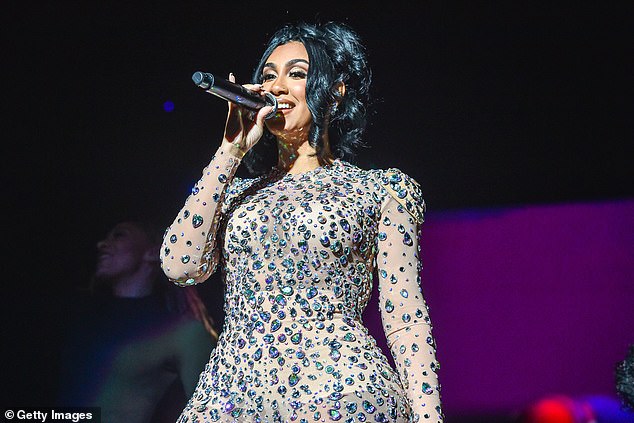