Maryland high school student, 19, is arrested after he ‘assaulted a 15-year-old classmate with a FRYING PAN during a health class’

Prince Cutchember (pictured), 19, was arrested for first degree assault on Monday after hitting his 15-year-old classmate with a frying pan

A high school student in Maryland was arrested after he allegedly assaulted a 15-year-old classmate with a frying pan during a health class.

According to Fox 5, authorities responded to the call around 10.41am after reports that Cutchember attacked the victim during fourth period health class in a portable classroom.

Rita Janeiro, a student who witnessed the incident, told Fox 5 that it started while the teacher was going over slides about mental health.

She said: ‘Then out of nowhere I just see [the suspect] come up, and I didn’t think anything was going to happen, but I see him come up with the pan and start banging [the victim] on his head with it.’

‘Then the [victim] is like, “What did I do to you, like stop please”, and [the suspect] is punching him to the floor.’

The victim was reportedly hit in the head at least once.

The Montgomery County Department of Police arrived to the incident around 10.41am and took Cutchember into police custody

It is unclear what caused the altercation or where Cutchember got the frying pan in the first place.

A letter sent by the high school to parents said Cutchember and the victim were arguing at the time of the assault.

Cutchember was taken into police custody and charged with first degree assault.

The victim was ‘treated and released’ at Walt Whitman High School.

Around the same time, someone pulled the fire alarm and caused the school to evacuate all students.

A student said told Fox 5: ‘We were all scared because of all the recent shootings that have happened around here and we were all very frightened.’

‘And then at the end of the period the fire alarm went off and we didn’t know whether to go out or not and so we all filed out.’ 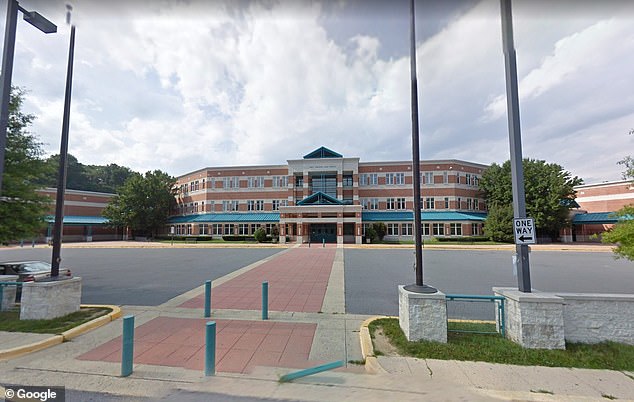 ‘There were like seven cop cars and we saw the guy get put into the back of the cop car…The ‘pan man’…We all had to stand 500 yards outside of the school, ambulances and firetrucks showed up, it was very frightening.’

He said: ‘It seemed to be focused on one student but we are not sure what the history was there..it’s just unusual.’

Cutchember is scheduled for a preliminary hearing in court on October 11.