The lacklustre performance has received plenty of criticism from fans and pundits, with many calling for Ole Gunnar Solskjaer to step down as the Manchester United manager.

Meanwhile, Liverpool were hailed for their performance at the Theatre of Dreams on Sunday – with particular praise falling into the laps of Mohamed Salah, Roberto Firmino and Naby Keita.

Chelsea were also in imperious form on Saturday as they stroked seven past Norwich to prove they are capable of scoring goals without their main man Romelu Lukaku.

It was Mason Mount who starred for the Blues – grabbing his first ever Premier League hat-trick against the Canaries, while Ben Chilwell claimed his fourth goal in four games.

Manchester City also delivered a masterclass on Saturday afternoon – having cruised past Brighton to win 4-1.  Phil Foden used the opportunity to further establish his credentials as a superstar, while Gabriel Jesus excelled after starting for the Citizens.

So, with all that in mind, Sportsmail have brought you a Power Rankings table – listing the top 10 players in the Premier League following this weekend’s action.

He picked out Thomas Partey from a corner for the opener before grabbing his team’s third goal in the 56th minute of the game.

The goal came after he latched onto a glorious outside-of-the-foot pass from captain Pierre-Emerick Aubameyang. Once he got hold of the ball he drove into the box and fired off a shot. 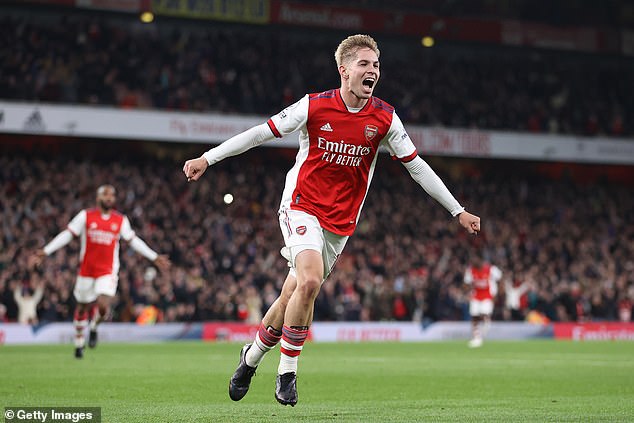 Smith Rowe’s effort deflected off Tyrone Mings and trickled in off the post to further Arsenal’s advantage.

The result marks Arsenal’s sixth unbeaten game in the league – the first time they’ve achieved that feat since January this year.

Speaking after the game, Smith Rowe picked out some of the bigger personalities in the dressing room that have inspired that run.

He told Sky Sports: ‘There’s a few [leaders] to be honest. Aubameyang the captain is always speaking, Gabriel, Ben [White] as well.

‘I feel like together we are such a strong team and we’re coming together really well. We always try and help each other on and off the pitch. It’s really starting to show.

‘Playing with these experienced players, it’s a bit surreal at times, but it’s great when we step on the pitch together and I feel like the chemistry is really coming together.’ 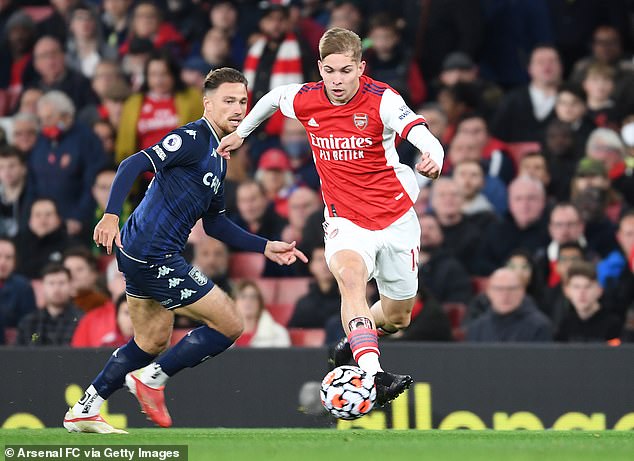 Gabriel Jesus excelled on the weekend. He was vital to Manchester City’s success against Brighton and appeared to be everywhere on the pitch, lending a helping hand to his team-mates.

Jesus was unlucky not to have scored a goal of his own after Lewis Dunk blocked his shot off the line. Nevertheless, he provided his team with an assist for their third goal of the game. 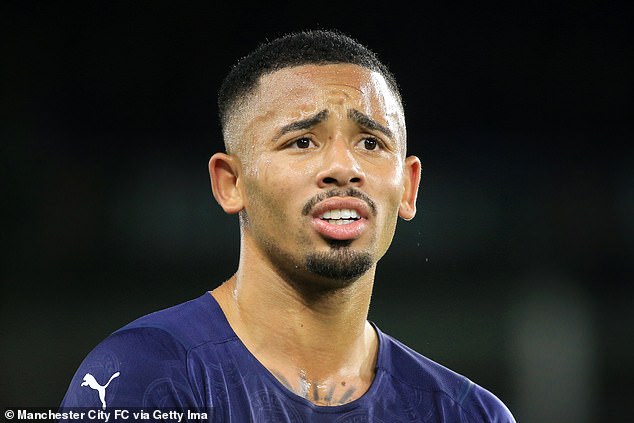 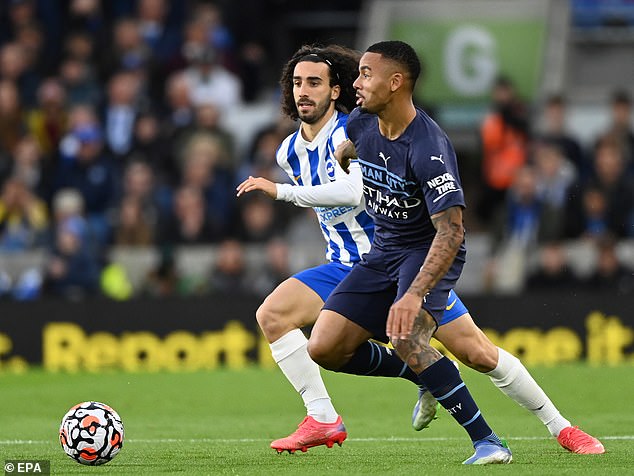 Ben Chilwell makes it into this week’s Power Rankings after scoring his fourth goal in four games for Chelsea. His contribution helped the Blues secure a 7-0 victory over Norwich.

As a result, Chilwell has become the first English player to score in four consecutive Premier League games for Chelsea since Frank Lampard back in February 2013.

Chelsea manager Thomas Tuchel couldn’t help but praise the defender for his performance – describing him as ‘very, very dangerous’ and a ‘permanent goal threat’. 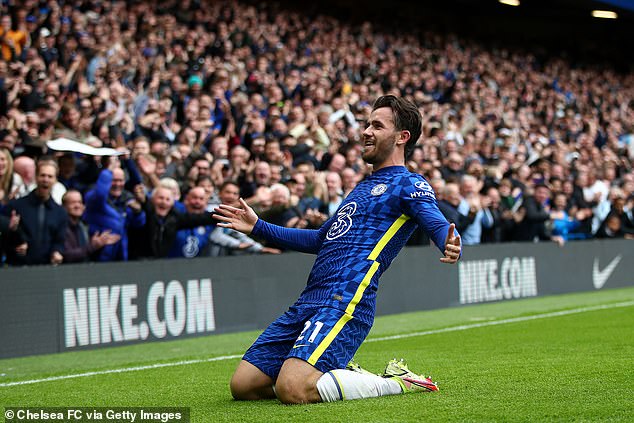 Naby Keita’s performance against Manchester United proved to be his best in a Liverpool shirt to date. However, it was unfortunately cut short after a terrible challenge from Paul Pogba saw him stretchered off the pitch.

The midfielder, who scored a screamer in midweek against Atletico Madrid, provided Liverpool with their opening goal of the game against United. He also teed-up Trent Alexander-Arnold – who fired in the cross for their second.

The midfielder went on to claim an assist for the third goal – having crossed the ball into Mohamed Salah. However, he was later forced off injured after a poor challenge from Pogba.

The Frenchman lunged into a two-footed tackle on the Reds midfielder with his side 5-0 down at Old Trafford. Pogba was initially booked but, after a VAR check, referee Anthony Taylor sent him off on the hour mark.

Meanwhile, Keita went off on a stretcher and was replaced by Alex Oxlade-Chamberlain. 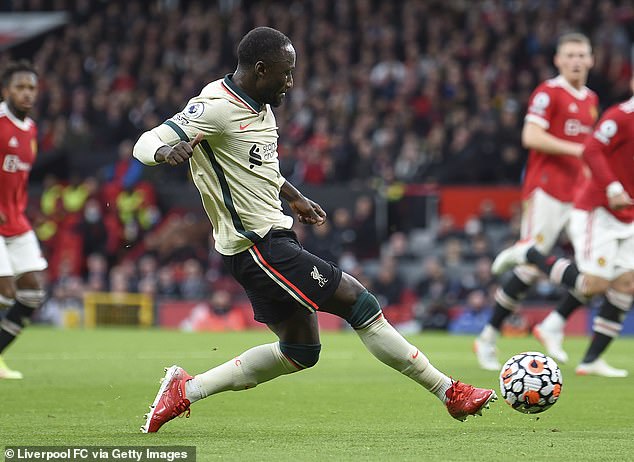 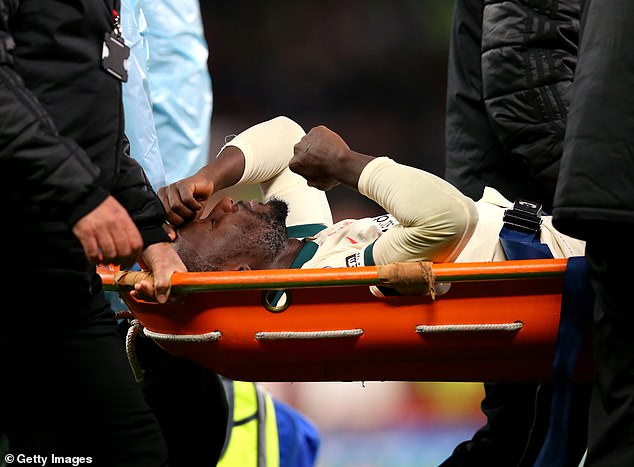 However, it was cut short after a challenge from Paul Pogba saw him stretchered off the pitch

Watford forward Josh King returned to Goodison Park on Saturday and proved his worth to his former club after he barley kicked a ball for the Toffees following his arrival on loan from Bournemouth.

The 29-year-old scored a sensational hat-trick to see Watford beat Everton 5-2. It also marked his 12th goal involvement against Everton in the Premier League.

After putting three past his old club, King spoke about his frustrating time under Carlo Ancelotti – saying: ‘I didn’t get given a chance.

‘I did wake up today and had a feeling. Obviously I was here, but I didn’t feel like I got given a chance. But that’s football.

‘Every time someone doubts you and doesn’t believe in you, you want to prove a point. That’s me personally, and I feel like I had a point to prove.

‘I woke up today and said to myself I needed to be on my A game, I didn’t expect the hat-trick to be honest but I’ll take it!’ 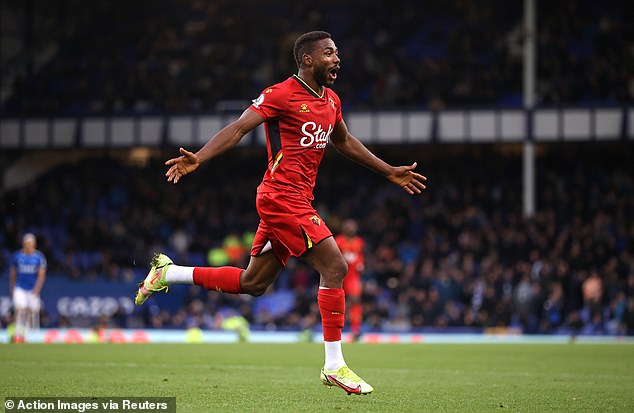 Youri Tielemans was a awarded a place in last week’s Power Rankings after pulling the strings from the centre of the park against Manchester United.

He made plenty of forward, positive passes to the front-men while running rings around Paul Pogba and Nemanja Matic.

He continued to demonstrate such qualities against Brentford at the weekend and even added another screamer to his growing collection to help Leicester secure a 2-1 win over the home side.

The 24-year-old midfielder struck the ball on the half volley from around 30 yards out to send it absolutely flying past David Raya in the 14th minute of the game.

As a result, Tielemans has now produced two goals and two assists in his last five appearances. 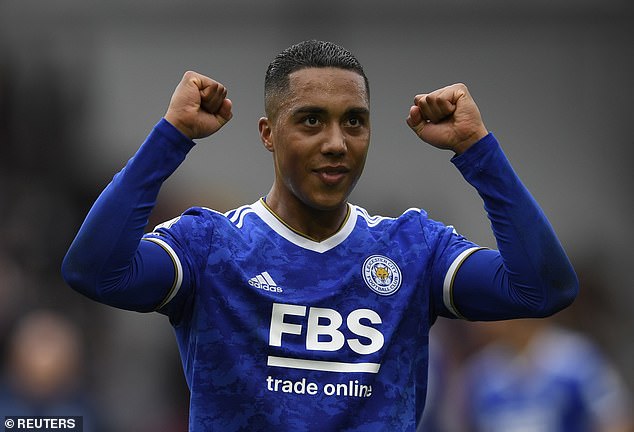 Mason Mount put an end to his goalless run of form dating back to Chelsea’s win over Real Madrid at Stamford Bridge in last season’s Champions League semi-final second leg.

He gave Chelsea the lead against Norwich on Saturday afternoon before claiming two more late goals as the Blues secured a 7-0 victory over the visitors.

Speaking after the game manager, Thomas Tuchel, said: ‘A hat-trick for Mason is huge, it’s a massive moment for him; he’s very, very proud’.

While Mount admitted he had put a lot of pressure on himself to score. He said: ‘Before the game, I put pressure on myself to get on the scoresheet, then three came around in the same game.

‘It’s obviously a massive moment for me. I’ll remember this one for a long time. I was always getting in positions to score, but I just wasn’t putting it in the back of the net.’ 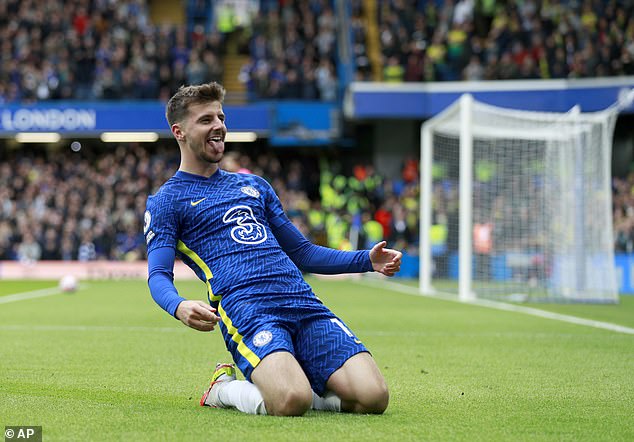 Phil Foden was the one pulling the strings in Manchester City’s convincing win over Brighton on Saturday afternoon. He was responsible for two of their goals after scoring his second brace in the Premier League.

Foden has subsequently become City’s top scorer in the top flight so far this season.

The Manchester City star also provided a late assist for Riyad Mahrez’s goal in the 95th minute of the game.

This is not the first time the youngster has played a defining role this season – having registered four assists and four goals in just 570 minutes of football so far this term. 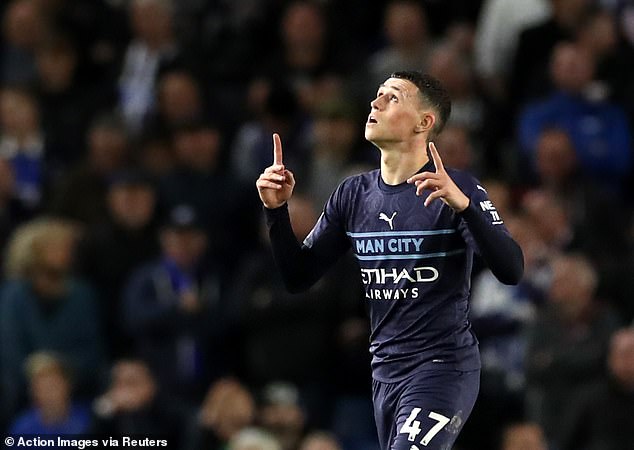 Roberto Firmino was on fine form last weekend when Liverpool overcame Watford 5-0. He doubled the Red’s lead prior to the half-time break, before adding his second from close range seven minutes into the second half.

However, he went on to better that performance by excelling against Manchester United on Sunday. Jurgen Klopp even admitted to being captivated by his display in the ‘false nine’ role on Sunday afternoon.

‘Mo Salah gets a lot of attention and rightly so but Bobby, for people with football knowledge, I’m pretty sure when he finishes playing people will write books about the way he interpreted the false nine position,’ Klopp said. 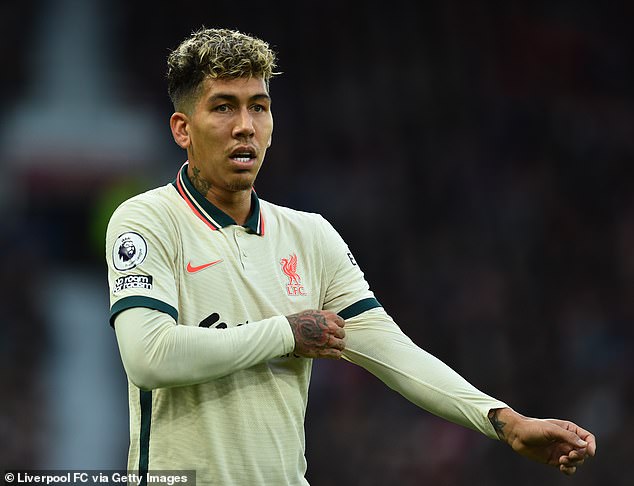 ‘I don’t say he invented it or we invented it, but with the way he plays it, from time to time it looks like (that)! There are different things to do on the pitch – some of them are defensive, and what he did in that department tonight was absolutely insane.

‘Offensively he is a nice link-up player and he finishes off from time to time as well.’

‘He’s a ball-chaser, incredibly smart tactically and able to play in the tiniest spaces; to make good decisions in really quick time.

‘And on top of that he can score goals, which is why we are so happy when he rewards himself from time to time, like the hat-trick he got at Watford.’ 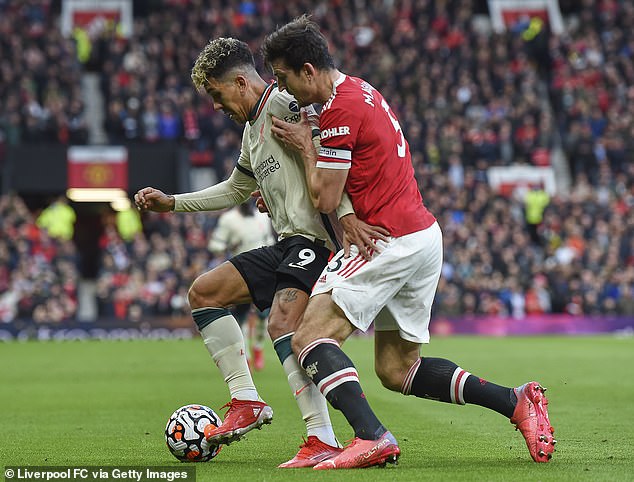 Mohamed Salah is showing no sign of slowing down after producing another stellar performance against Manchester United on Sunday.

He was instrumental in Liverpool’s success on Sunday afternoon, scoring three of their five goals away at Old Trafford. As a result, he has now scored in 10 Premier League games in a row.

He referred to such a milestone as ‘the stuff of dreams’ after the game, saying: ‘It’s great to win 5-0 here away. 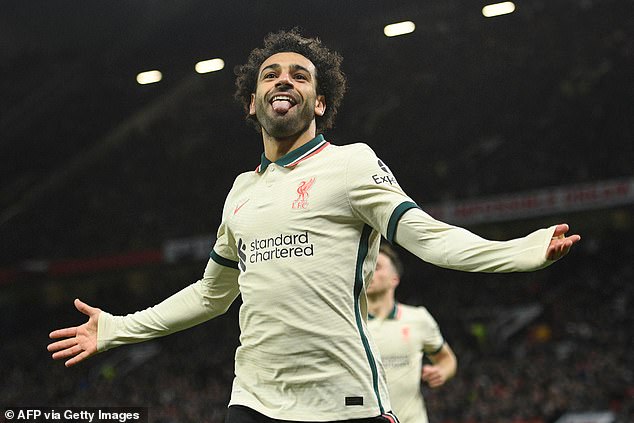