Massive protests against Brett Kavanaugh broke out on Capitol Hill Monday with Republican Senators Jeff Flake and Susan Collins specifically target in a bid to persuade them to vote against President Donald Trump’s Supreme Court nominee.

Hundred of protestors were arrested in the Russell Senate Office building and outside the offices of the two senators, who are key votes on Kavanaugh’s confirmation.

The protestors delivered petitions calling for an FBI investigation into the allegations and told their own stories of sexual assault. Many wore black t-shirts that read ‘Believe Women.’

With Republicans 51-seat GOP majority, they can only afford to lose one senator if all Democrats vote against Kavanaugh.

A woman tells a personal story of sexual assault to a group of protesters against Supreme Court nominee Brett Kavanaugh gathered outside offices of Sen. Jeff Flake on Monday 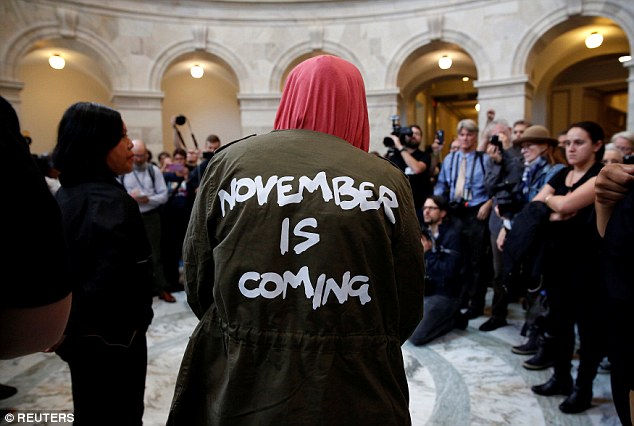 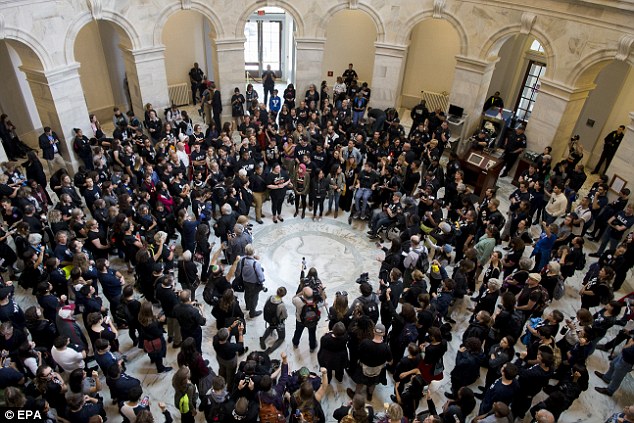 Flake and Collins were seen as wavering after Christine Blasey Ford went public with her allegation Kavanaugh sexually assaulted her at a high school party in the 1980s.

Kavanaugh has denied it.

Flake specifically said he would not be comfortable voting yes on Kavanaugh without hearing from Ford.

She is scheduled to testify before the Senate Judiciary Committee on Thursday, as is Kavanaugh, who said in a statement Monday he ‘will not be intimidated into withdrawing from this process.’

Flake is retiring from the Senate after this year and has had an antagonistic relationship with Trump going back to the 2016 campaign. 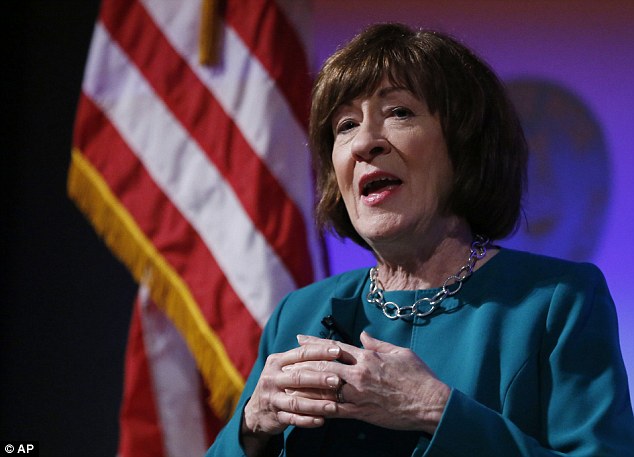 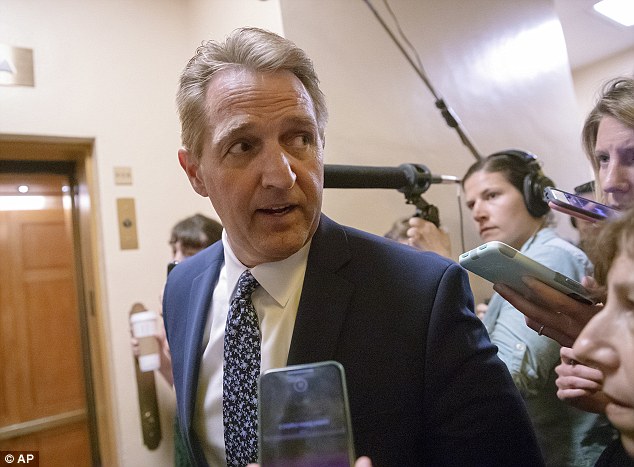 Sen. Jeff Flake was seen as wavering on Brett Kavanaugh 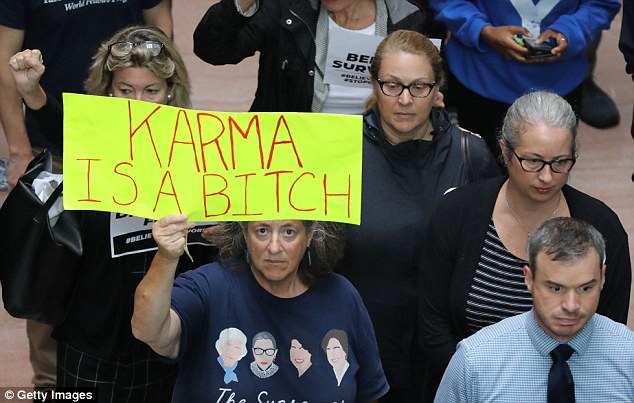 Trump predicted his nominee will get no Democratic votes in the Senate.

‘We’ll get almost no Democrat,’ he said on the ‘Geraldo in Cleveland’ show on WTAM radio. ‘We may get a couple in states where I won by many, many points — you understand that — but we’ll essentially get no Democrat.’

If no Democratic senator supports Kavanaugh, Republicans can only afford to lose one vote with their 51-seat majority. That one loss would cause Vice President Mike Pence to have to break the tie.

Flake, Collins and fellow Republican Senators Lisa Murkowski and Bob Corker are considered the ones to watch for a possible defection.

Originally the White House had hoped to pick up votes from a few Democratic senators running for re-election in states Trump won in 2016.

Three of those senators – Joe Donnelly of Indiana,  Joe Manchin of West Virginia and Heidi Heitkamp of North Dakota – voted for Trump’s first nominee to the Supreme Court Neil Gorsuch. 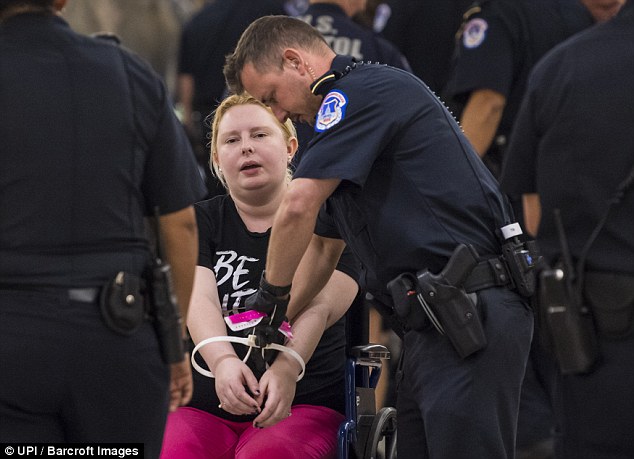 Demonstrators are arrested outside of Sen. Susan Collins’ office 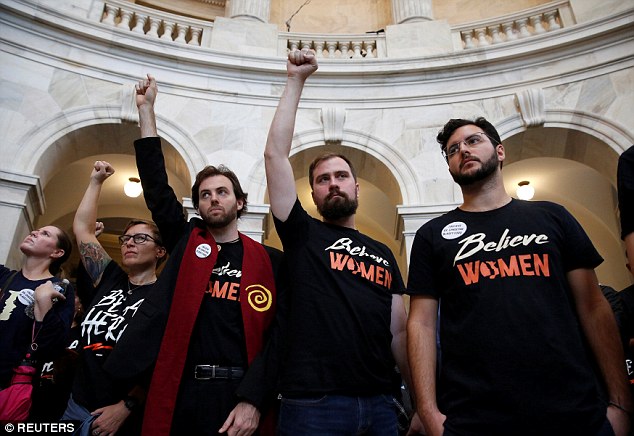 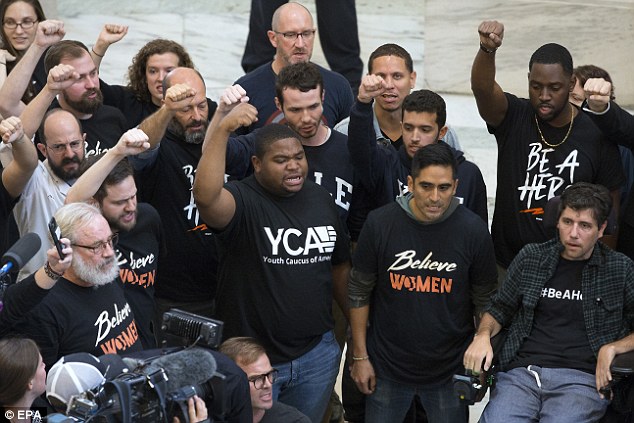 None of them have said how they will vote for Kavanaugh.

Unknown is how a new allegation could affect their vote. 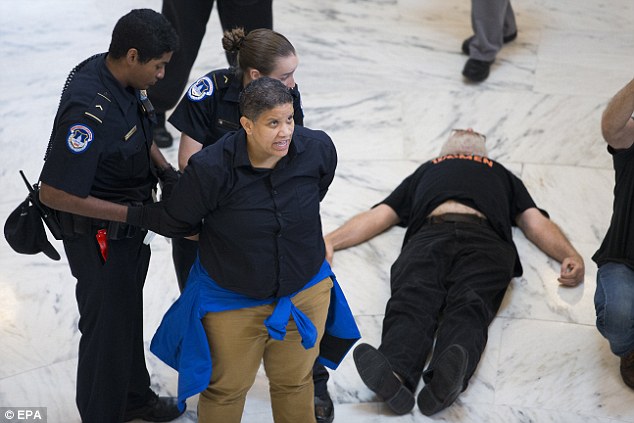 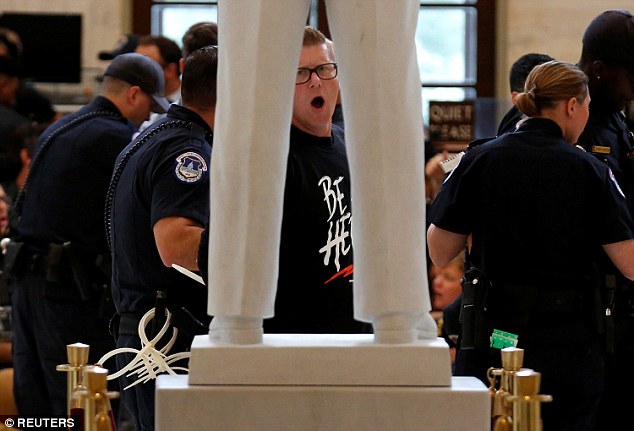 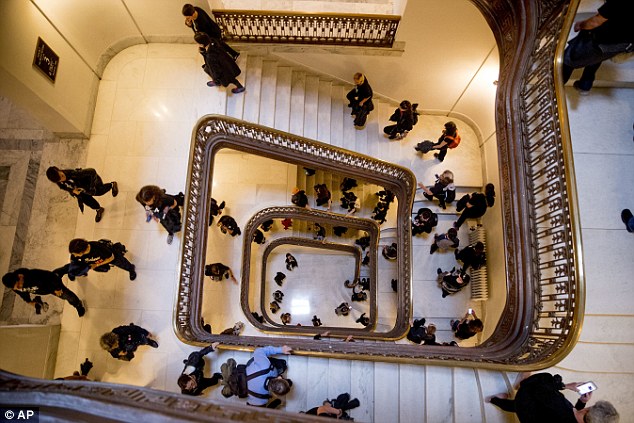 Protestors on the stairs of the Russell Senate Office Building 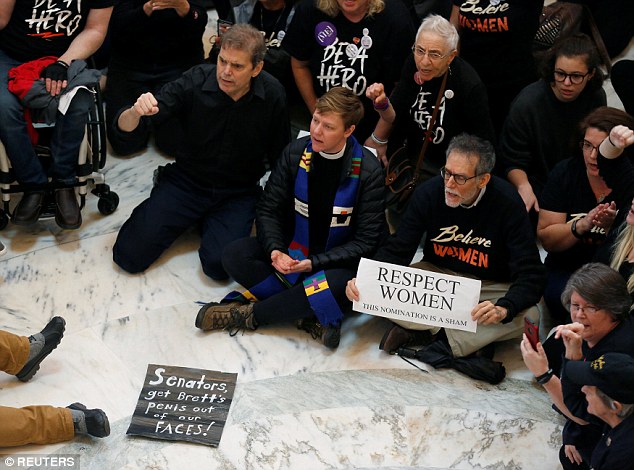 Protestors stage a sit in on Capitol Hill

In a statement provided by the White House, Kavanaugh denies the event ever happened.

Kavanaugh says the event ‘did not happen’ and that the allegation is ‘a smear, plain and simple.’

A White House spokeswoman adds in a second statement that the allegation is ‘designed to tear down a good man.’