A Massachusetts library has sparked uproar after refusing to put up its annual Christmas tree because it made some people uncomfortable.

The Dedham Public Library has also avoided posting any advertisements for Christmas activities on social media accounts this year, instead referring only to ‘the spirit of giving.’

Some dubbed the move as a ‘war on Christmas’ – which appeared particularly unfair as the library is known to celebrate other special events, such as Pride week and Juneteenth.

The Board Library of Trustees will meet to hold further discussions about whether a tree should be put up on December 13.

Dedham Public Library officials refused to put up their annual Christmas tree because it made some people uncomfortable. Pictured: a kid putting an ornament on the tree in December 2021 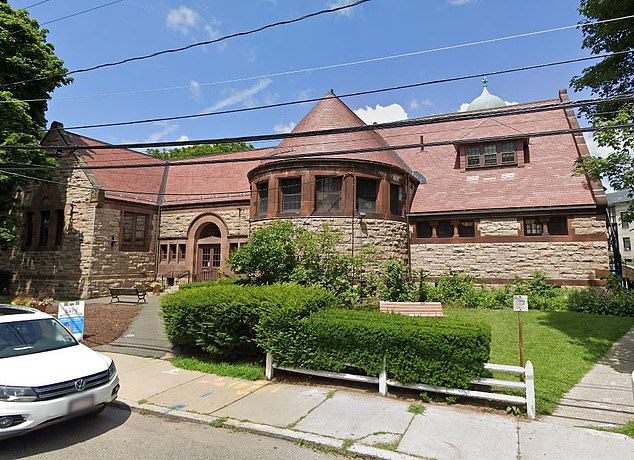 Many residents were outraged and said they weren’t given an exact explanation as to why the tree was barred. Pictured: The Dedham Public Library

It is unknown how many complaints the library received from people claiming to be offended by the traditional holiday tree.

But many outraged locals have since hit back at the decision and said it is especially disappointing for children visiting the library over the festive season.

Lisa Desmond, library supervisor, was outraged when she was notified the Christmas tree wouldn’t be going up this year.

‘I found out today that my beautiful library will not have it’s Christmas tree this year. Zero explanation.

‘When I asked, I was told “people” were made uncomfortable last year looking at it. I’m sorry WHAT? In my 28 years at the Dedham Public Library, I have never heard a negative comment.’

Desmond explained library officials have strived to make people from every background comfortable while at the library.

‘We have celebrated and included everyone in our community. In fact, I was asked to emcee Juneteenth this year. What an honor. Those who know me, and my family know we celebrate Christmas Hanukkah.

‘My Muslim friends and Western Indian friends invite me to their celebrations. What an amazing gift.’

Desmond attached a photo a photo of her son hanging an ornament on the tree last year.

‘Those who know me know I lead with positive intentions. I’m not feeling very positive today. Please bring Christmas back to my beautiful library. And always lead with love in your heart.’

The library has also halted annual Christmas activities that appeared to be active last December – such as  ‘Holiday Movie Mornings,’ ‘Holiday Happenings: Crafts for Kids,’ and ‘Holly Jolly Storytime’. 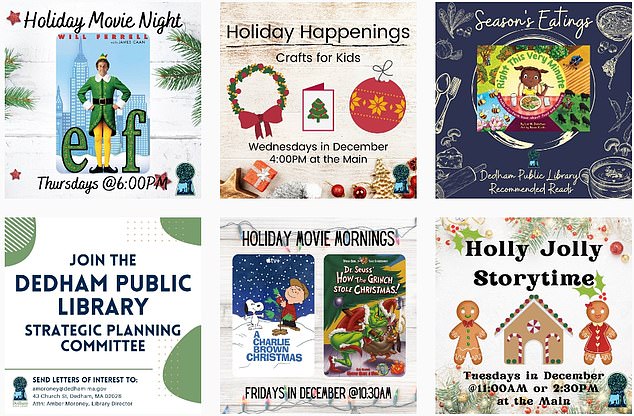 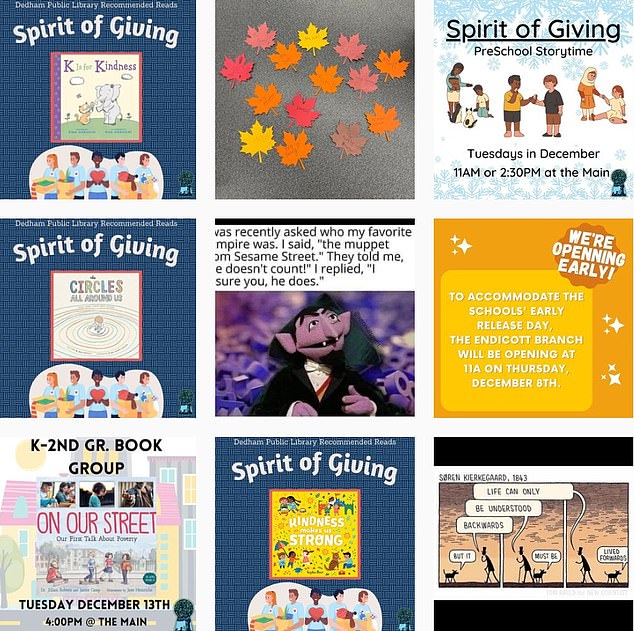 This year, the library has since referred to the Christmas season as the ‘Season of Giving’ 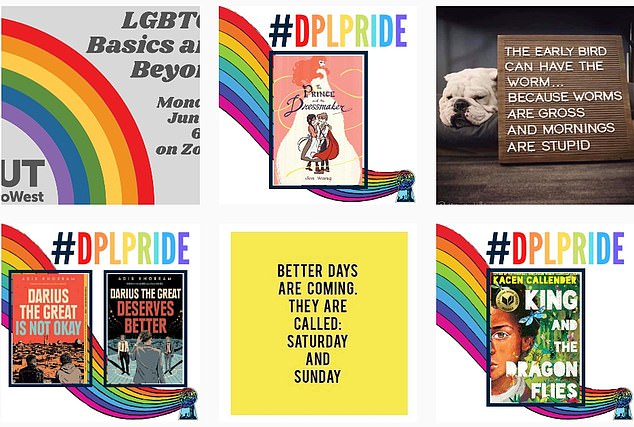 Some dubbed the move a ‘war on Christmas’, especially as the library is known to celebrate other dates, such as Pride week and Juneteenth. Pictured: the library’s Instagram posts in June during Pride month 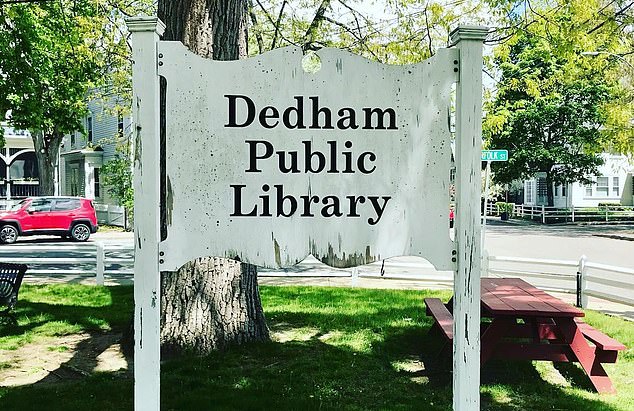 Conservative show host Todd Starnes dubbed the decision not put up a tree as a ‘war on Christmas.’

He wrote: ‘The Dedham Public Library refused to put up the annual Christmas tree because it made people “uncomfortable.” The library had no issue hosting LGBT-themed events, but a Christmas tree crossed the line. Yank the library’s taxpayer funding.’

Library employees appeared to have extensively celebrated Pride month in June with a series of LGBT+ related Instagram posts. An LGBT+ Book Club is also hosted at the library once a month on a Wednesday night. 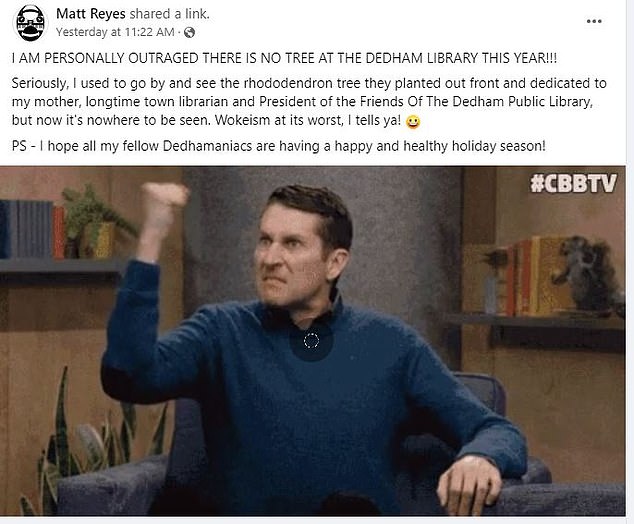 Dedham residents also expressed their fury on social media and blamed the removal of the beloved tree as apart of ‘woke’ policies.

‘I am personally outraged there is no tree at the Dedham Library this year,’ one Matt Reyes wrote.

‘Seriously, I used to go by and see the rhododendron tree they planted out front and dedicated to my mother, longtime town librarian and President of the Friends Of The Dedham Public Library, but now it’s nowhere to be seen. Wokeism at its worst, I tells ya.’

However, a few residents were more supportive of the move.

One wrote: ‘I for one applaud this brave action. It is about time that this hateful symbol of peace on earth and goodwill toward men is eliminated from being able to disturb and disrupt the lives of woke Dedham library patrons.’ 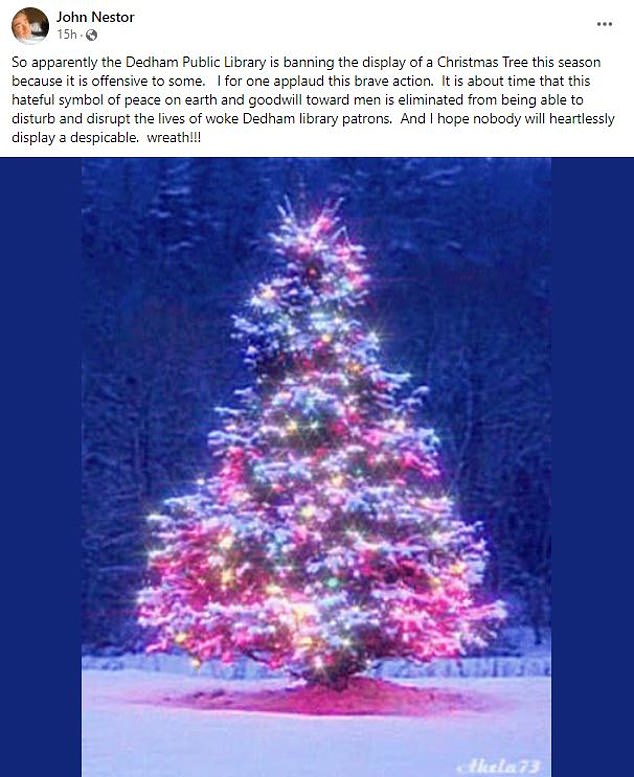 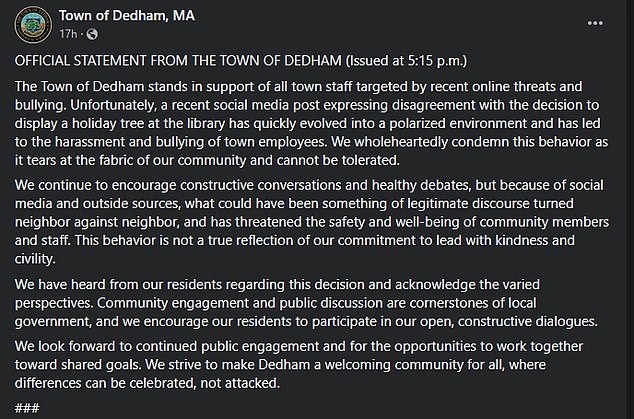 Dedham officials announced that the contentious topic has led to the library staff being targeted and bullying.

A statement read: ‘Unfortunately, a recent social media post expressing disagreement with the decision to display a holiday tree at the library has quickly evolved into a polarized environment and has led to the harassment and bullying of town employees.

‘We wholeheartedly condemn this behavior as it tears at the fabric of our community and cannot be tolerated.’

Town officials concluded the statement claiming they look forward to discussing the matter on whether the tree should be put up or not at a later date.

‘We strive to make Dedham a welcoming community for all, where differences can be celebrated, not attacked.’