A former professor who was once convicted of staging his own shooting is now accused of forging part of his dead son’s will to gain possession of several properties in Massachusetts.

John J Donovan Sr., was indicted by a grand jury in Salem on Thursday on seven counts of forgery.

The former Massachusetts Institute of Technology professor who built his fortune by starting several technology companies was also charged with attempted larceny, witness intimidation and obtaining a signature by false pretenses.

John J Donovan Sr. (pictured here in 2004 in his office when he was head of Cambridge Executive Enterprises) was indicted yesterday, on charges for forging part of his dead son’s will to gain possession of several properties in Massachusetts

Prosecutors say Donovan, of Hamilton, Massachusetts, schemed to obtain at least four properties in northeast Massachusetts that had been left by his youngest son, John Donovan Jr.

Donovan Jr., 43, died in April 2015 after being diagnosed with a rare form of cancer. He was the owner of the Manchester Athletic Club.

The senior Donovan, 75, is accused of forging his son’s signature to gain title to the property deeds, and of forging a variety of other documents related to his son’s final will.

Authorities began investigating after the local register of deeds raised concerns about the documents in March 2017 and referred the case to the district attorney’s office.

Donovan will be arraigned in Salem Superior Court. 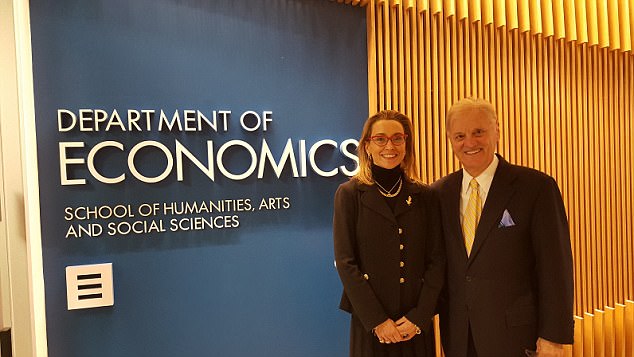 Donovan, pictured here at the Massachusetts Institute of Technology where he used to be a professor, was convicted of staging his own shooting in 2007

He was found guilty in 2007 of staging his own shooting outside his business office in Cambridge, Massachusetts.

He said he was attacked by two Russian hit-men while getting into his car on the night of December 16, 2005. He said his son James hired the men and denied any role in the shooting. 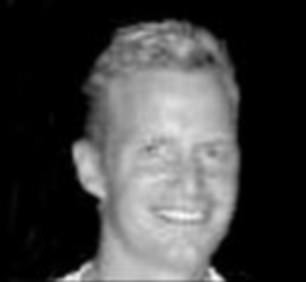 John J Donovan Jr (pictured) died in died in April 2015 after being diagnosed with a rare form of cancer. He was the owner of the Massachusetts Athletic Club

But prosecutors at the time said he shot himself in the stomach and fabricated the story to frame his son. He was accused of crafting the scheme to gain the upper in hand in a legal battle with his five children over control of trusts that were said to be worth $180 million.

He was convicted of filing a false police report and was sentenced to two years of probation.

His son James is a Goldman Sachs executive who was nominated for the No. 2 job in Republican President Donald Trump’s Treasury Department earlier this year but later withdrew from the process, citing personal reasons.

Donovan could not be reached for comment on Thursday. It was unclear if he has obtained a lawyer. 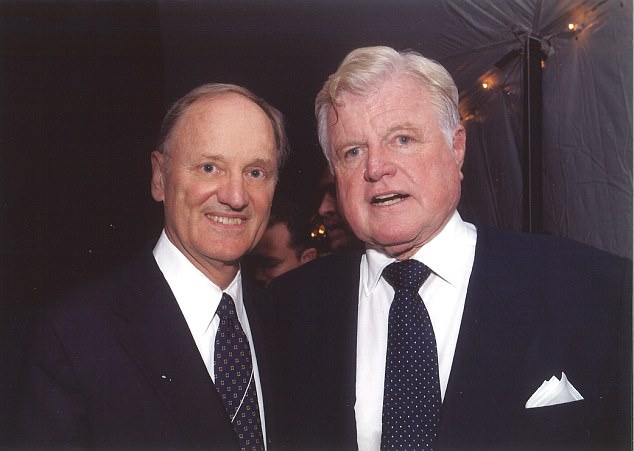 Donovan, pictured here with Ted Kennedy, will be arraigned in Salem Superior Court. His son James was nominated for the No. 2 job in Donald Trump’s Treasury Department earlier this year