By Elizabeth Haigh For Mailonline

A huge fire has broken out in the World Cup city of Lusail in Qatar, with plumes of black smoke rising into the sky right next to one of the country’s fan villages.

The huge tower of smoke can be seen rising across the fan village, named Qetaifan Island North, although exactly where the fire originated is still unclear.

Officials said the blaze broke out in a building under construction in the city.

Authorities sought to reassure fans and residents in a tweet posted just after 10am, but video posted on social media showed that the fire was visible from miles away.

A huge fire broke out in a building very close to the fan village in Lusail, Qatar 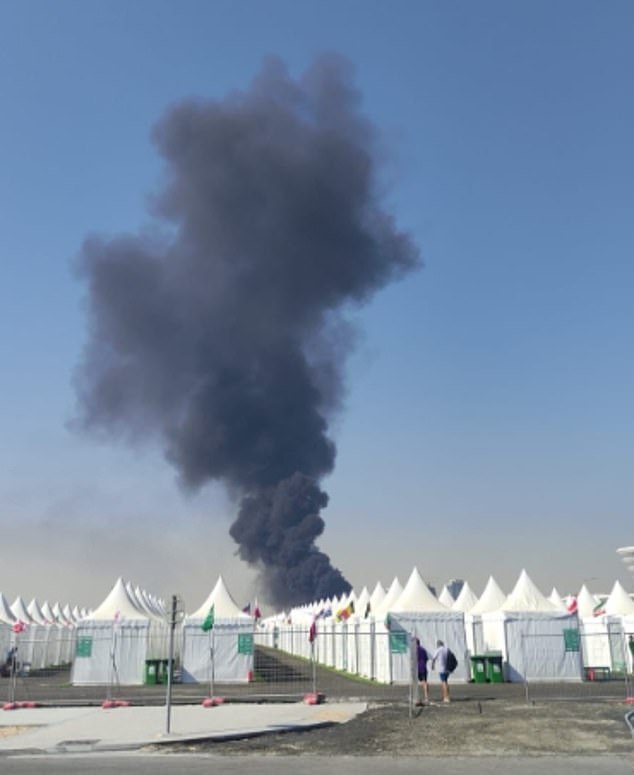 Images show the village, which is made up of canvas tents, in the city of Lusail, to the north of capital Doha on Qatar’s east coast.

The Qatari government spent billions of pounds building up prior to the World Cup beginning in the country last week.

Authorities said the Civil Defense controlled a fire in a building under construction without any injuries. 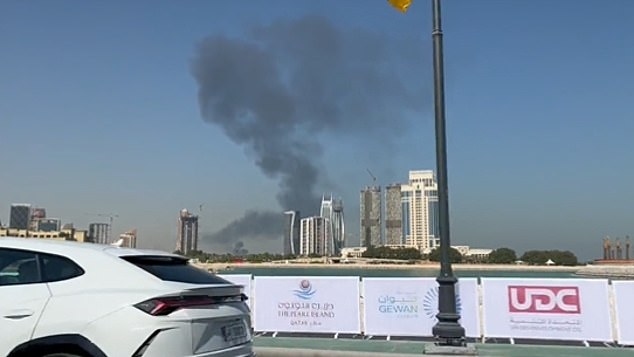 Dramatic footage shows the roof of a building on fire near the fan village, but it is not immediately clear what the building under construction was planned to be.

Similar fan villages have come under fire in recent weeks due to allegations they are unfinished and vastly overpriced.

Villages closer to the capital have been filled with metal container rooms described as ‘hell boxes’ by builders and guests, with complaints over a lack of facilities and air conditioning.

Qatar has reportedly spent up to £185 billion on infrastructure works in the run-up to the World Cup, but has seen fierce criticism after it emerged around 6,500 migrant workers are thought to have died while building the tournament’s venues.

Much of this money was spent on Lusail, which had a brand new stadium built from scratch for the occasion.

The city, which is the second largest city in Qatar with 200,000 workers, is located in the southern part of the municipality of Al Daayen.

But not everything in the city was completed on time for the event, including a huge waterslide which was supposed to be the largest in the world.

It is the latest incident in a scandal-filled tournament which has seen last-minute booze bans, unexpected results on the pitch and criticism over the nation’s strict rules on LGBT+ and women’s rights.

In another embarrassment for the country on Saturday the official streaming platform of the World Cup was inaccessible in much of Saudi Arabia, where many fans are staying.

The platform, Tod TV, is owned by the Qatari broadcaster beIN Media Group, which was banned in Saudi Arabia for several years during a row between the two countries but was restored in October 2021.

‘Due to matters beyond our control, we are experiencing an outage in the Kingdom of Saudi Arabia, which is currently impacting TOD.tv, the official streaming partner of the FIFA World Cup Qatar 2022. Additional information will be provided as soon as it is available,’ beIN said in a message sent to partners and subscribers.

The Saudi government did not respond to a request for comment about the disruption, while beIN declined to comment.

This story is being updated.