Two multimillion-dollar yachts were destroyed in massive fire at a marina in Florida, totaling to more than $20 million in damages.

Authorities were alerted to the unexpected blaze at Universal Marine Center around 4.30am on Saturday morning.

More than 60 firefighters and three fire boats arrived to the scene to quell the ongoing fire and attempt to stop the flames from spreading other nearby yachts.

Authorities believe the fire broke out on a 107-foot Christensen yacht dubbed Reflections that was worth an estimated $8 million. 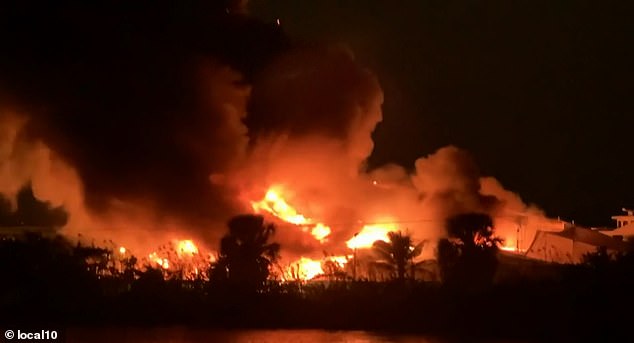 Emergency crews have not determined the specific caused of the fire that began Saturday morning at 4.30am 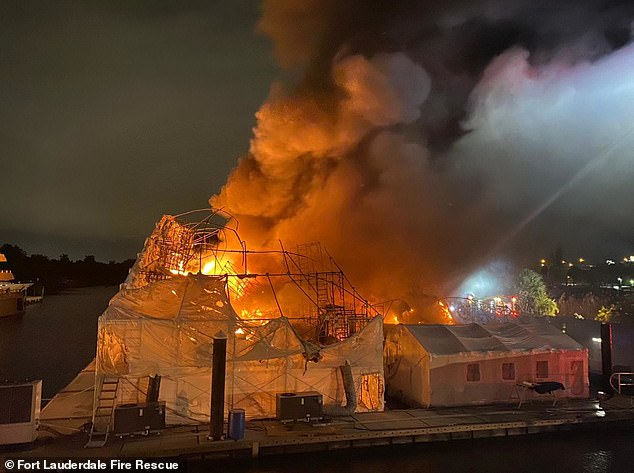 It then spread to a neighboring a 160-foot Trinity yacht named Lohengrin worth $12 to $16 million.

Wind is thought to have played a factor in the flames ability to spread.

The Fort Lauderdale Fire and Rescue crew told CNN that the fire caused more than $20 million is lost property.

As of Sunday morning, emergency crews were still on the scene working to extinguish ‘hot spots’ and a crane removes scaffolding from the structure around the yachts. 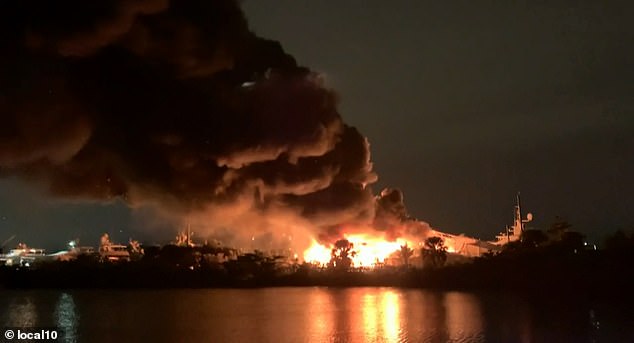 Pictured: Flames and dark smoke billowed across parts of Fort Lauderdale as the blaze damaged the yachts 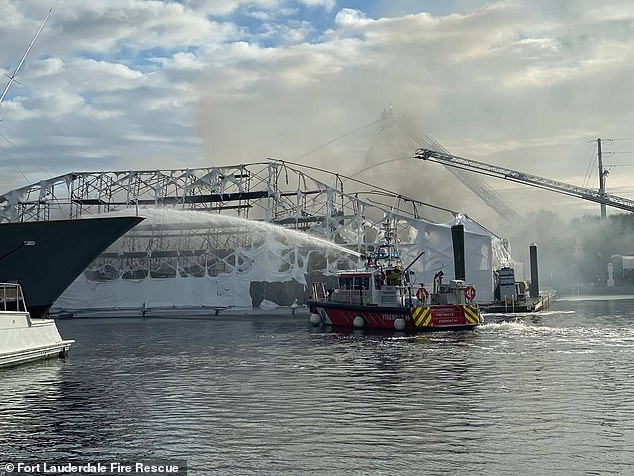 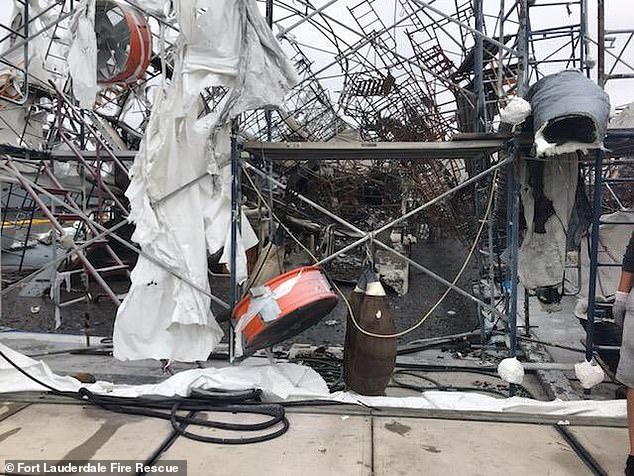 ‘Once the hot spots are extinguished then the investigation and salvage will begin,’ the Fort Lauderdale Fire Rescue information officer said.

The fire caused thick smoke to bellow across parts of Fort Lauderdale as the scary inferno raged on neat State Road 84.

Residents say they heard loud booms when the fire began.

Arlene Meyer, a nearby resident, called 911 with her husband after the fire began.

She told Local 10: ‘I heard about three big explosions. I was just so amazed that it went up in flames in one day.’ 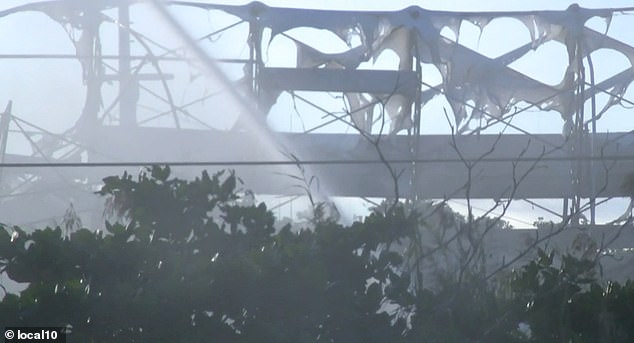 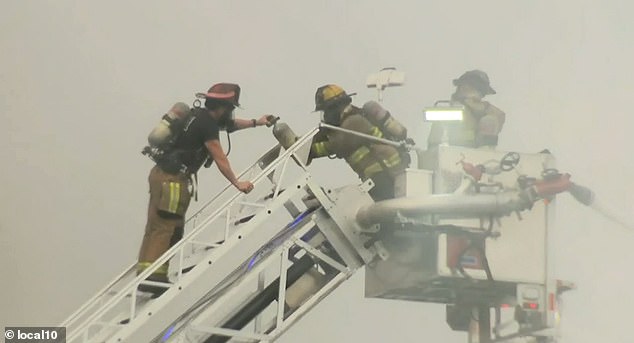 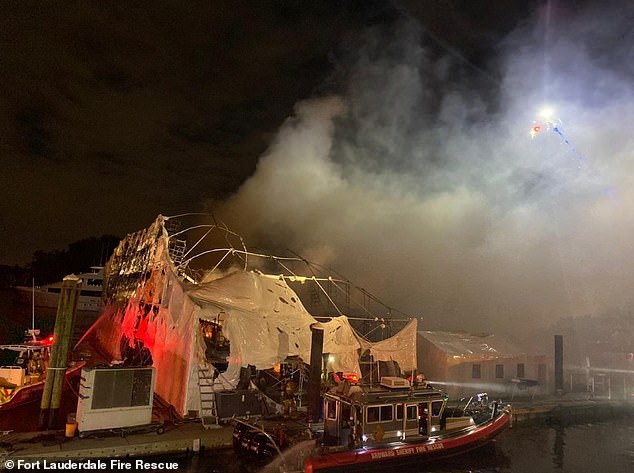 Crews kept a ladder truck overnight to keep the fire from reigniting.

Jeffrey Lucas, the city’s fire marshal, said putting out the fire is not an easy feat.

‘Once we got here, there were access problems and water problem,’ he told CBS 4.

Both the location and the boat’s construction status at the time of the fire posed a problem for responding emergency crews.

Both of the yachts were under construction or getting rehabbed when the fire began, causing nearby scaffolding to get caught in the fray 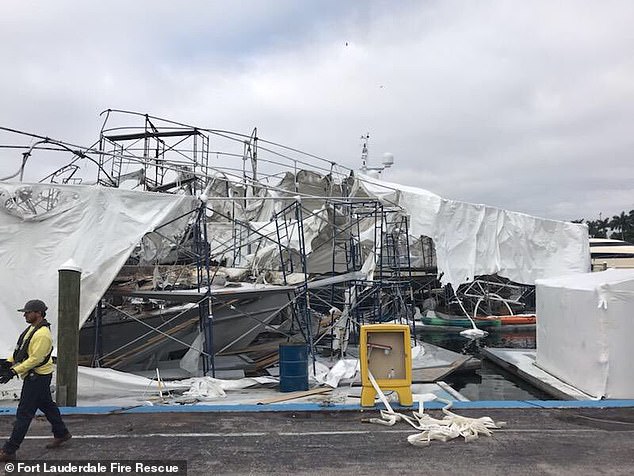 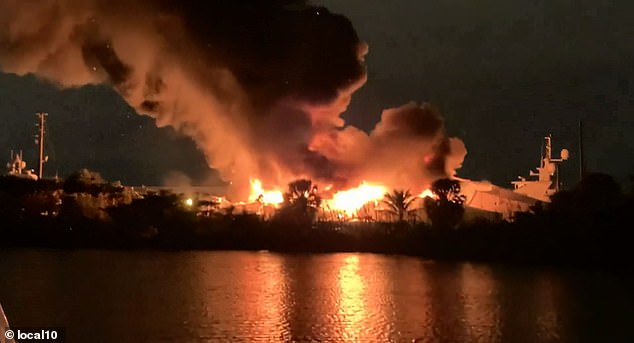 Pictured: the fire that broke out at Universal Marine Center on Saturday 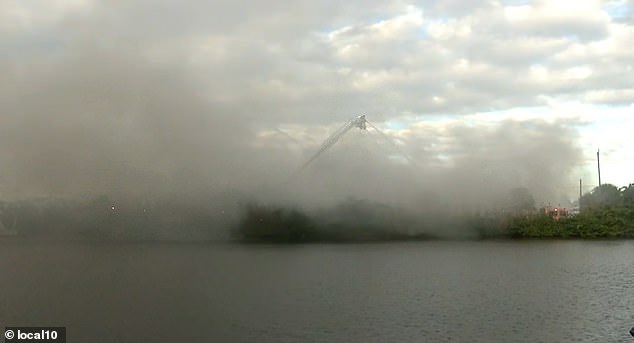 Lucas said: ‘With these boats, when they’re under construction or they’re getting rehabbed, they have a lot of scaffolding around them. What’s keeping us from going on the boat is leaning scaffolding.’

Investigators have not yet figured out what sparked the flames, but are investigating potential causes. 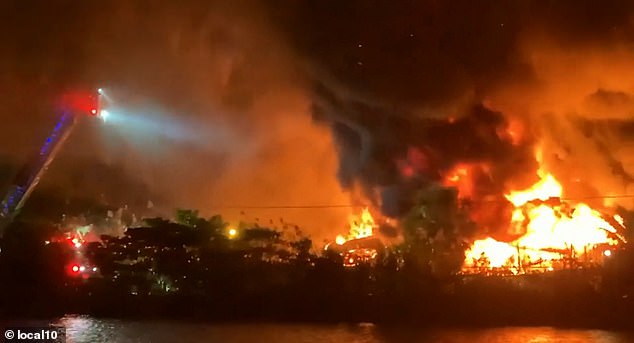 Pictured: Firefighters using cranes to spray water from above the wild flames

No one was injured by the fire. 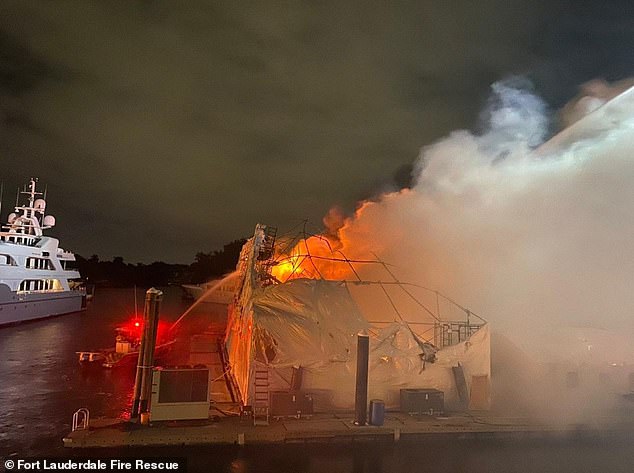 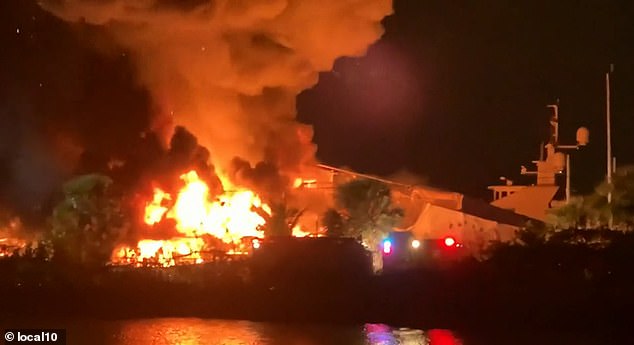 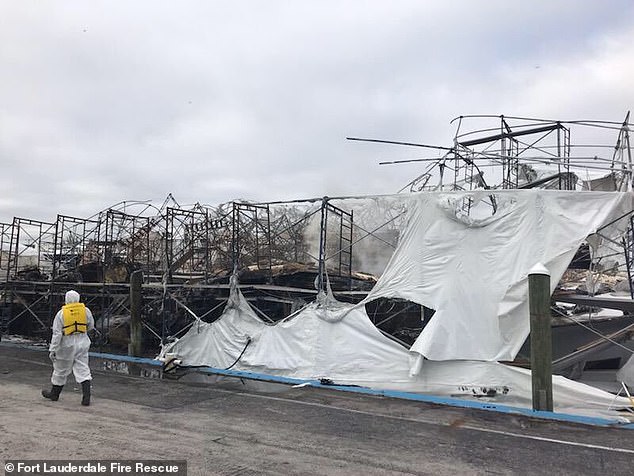 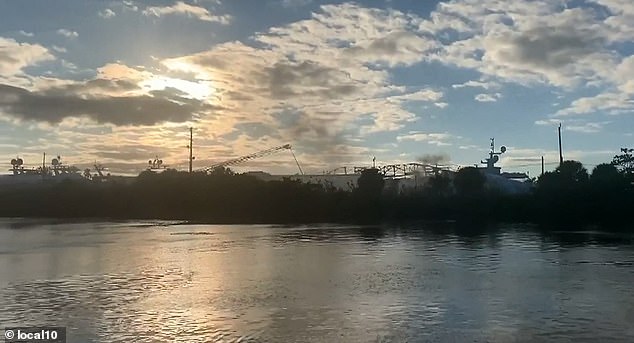