On a full ssssstomach: Massive python is found curled up in a children’s cubby house after devouring a POSSUM

A snake catcher has retrieved a massive carpet python from a children’s playhouse in the backyard of a family home.

Local catcher Luke Huntley was called to a home in Noosa Heads, Queensland, on May 17 after the seven-foot long snake slithered into a children’s playhouse.

‘We’ve got a pretty decent sized carpet python here in this cubby house,’ Mr Huntley said in a video, as he stood in front of the play area.

As the snake catcher prepared to retrieve the large snake, he began to hide in a cupboard of the structure.

Mr Huntley then opened the cupboard and said: ‘Look at that, he’s literally curling under one of the cupboards at the moment.’

The snake catcher then lifted the python up, declaring he had probably eaten ‘a possum or something’ due to the mass in the middle of his body and was trying to curl up somewhere warm to digest the snack.

Mr Huntley presented the snake to the camera.

‘Children’s cubby houses are not the place for these beautiful animals,’ he said.

‘Look at the colours on him, he’s very nice and pale.’ 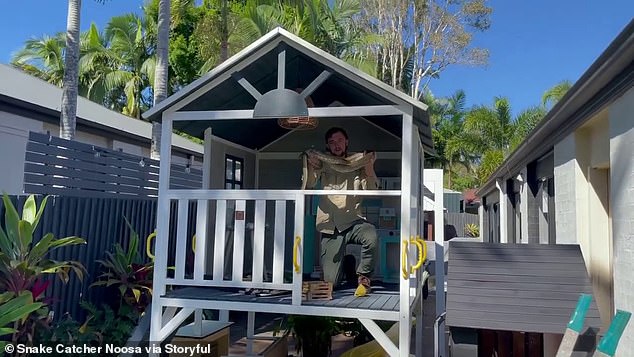 Local catcher Luke Huntley was called to a home in Noosa Heads, Queensland, on May 17 after the seven foot long snake slithered into a children’s playhouse

The video was viewed more than 11,000 times on Facebook.

‘You mean the kids didn’t want to share their fabulous cubby?’ one viewer joked.

‘The snake was looking at us through the windows when we were in the lounge room,’ they said. 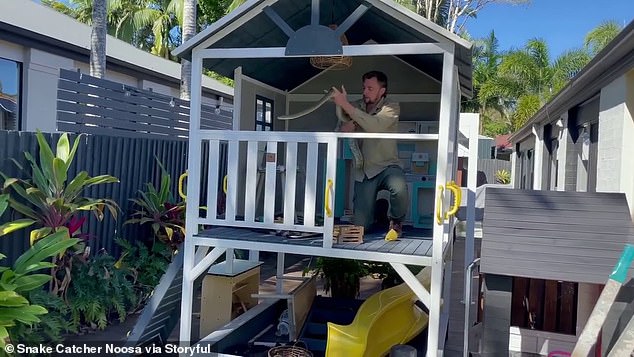