Mandarin-language election signs in Melbourne, instructing Chinese voters how to vote Liberal, have been criticised as a ‘massive rort’ and misleading.

Luke Hilakari, the Victorian Trades Hall Council secretary, tweeted an image of the posters in the electorate of Chisholm, claiming the posters had the same font and colours as official voting information from the Australian Electoral Commission (AEC).

He said the posters read ‘the correct way to vote is to put a number 1 next to the Liberals and number every other box’, and appear to be written like an official AEC instruction to voters.

‘This is a rort. The Libs are trying to trick Chinese voters. Morrison’s Libs should never have approved these signs,’ he tweeted on Saturday.

AEC spokesman Evan Ekin-Smyth said the posters did not need to be taken down as they were properly authorised and no laws had been breached.

‘We don’t own the colour purple, and it’s not possible to do that. They just need to be appropriately authorised, which they are,’ he told AAP.

‘While clearly the AEC would prefer no-one uses purple and (makes posters) to look like an AEC (poster), people can make posters so long as they are authorised appropriately.

‘My understanding is that it meets the requirements of the Act. No law has been breached.’

Mr Hilakari said an officer at the Burwood East polling booth tried to take down the sign.

However, a Liberal campaigner threatened to call police to stop the posters from being removed, The Sydney Morning Herald reported. 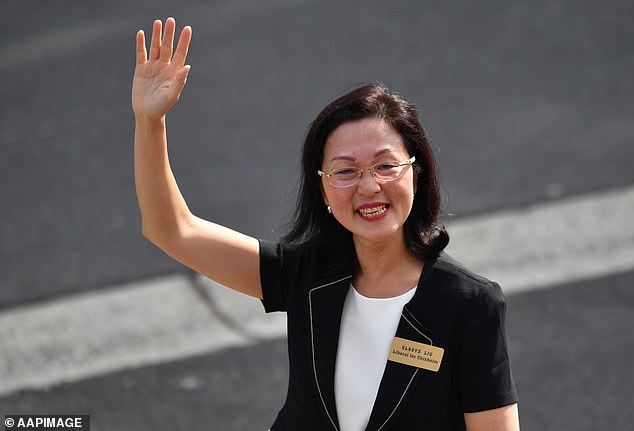 The Mandarin signs have sparked outrage and has been criticised as misleading and a ‘massive rort’ (pictured: Liberal Candidate for Chisholm, Gladys Liu)

Bill Shorten said he had not heard about the incident, The Guardian reported.

‘Always look at who benefits from the dirty tricks and that generally is the culprit, isn’t it?’ he said.