Wipeout! Massive wave engulfs two bikini-clad tourists as they pose for a photo on the rocks in Hawaii

This is the hilarious moment a woman posing on the beach was smashed by a wave that washed both her and her photographer away.

Standing on the jagged rocks to the backdrop of Kauai, Hawaii’s tropical seas was meant to provide the ‘perfect shot’ for these two bikini-clad tourists.

And although the waves were crashing on to the shore and threatening to knock them over, they remained by the water’s edge determined to get their picture.

But their luck finally ran out when a huge surf splashed down on the couple and swept them all the way back to the cliff.

Footage has recently emerged online after a backpacker who was exploring Queen’s Bath tidal pool witnessed the epic wipeout.

Their 33-second clip which is taken from the top of a small rock-face shows the two women, wearing bikinis, by the sea.

One dark-haired woman is crouching down and training her camera on the second blonde-haired tourist who is perched on top of a rock and staring out to the horizon.

At this point, the waves are not breaking far on to the shore and the water is only lapping at the blonde-haired’s feet.

But as she strikes a different pose and turns back to the camera, they begin to grow bigger and someone behind the camera is heard saying ‘this one, here we go!’ 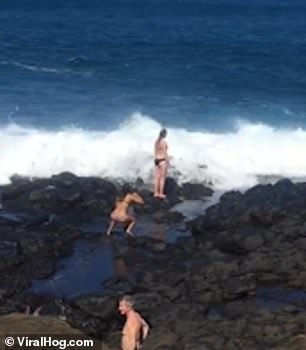 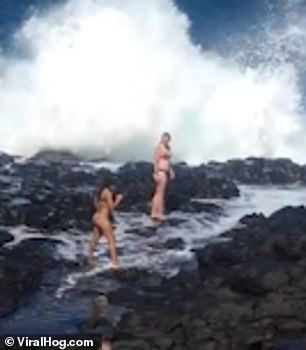 A dark-haired woman is crouching down and training her camera on the second blonde-haired tourist who is perched on top of a rock and staring out to the horizon, but as she turns back to the camera, the waves begin to build in size 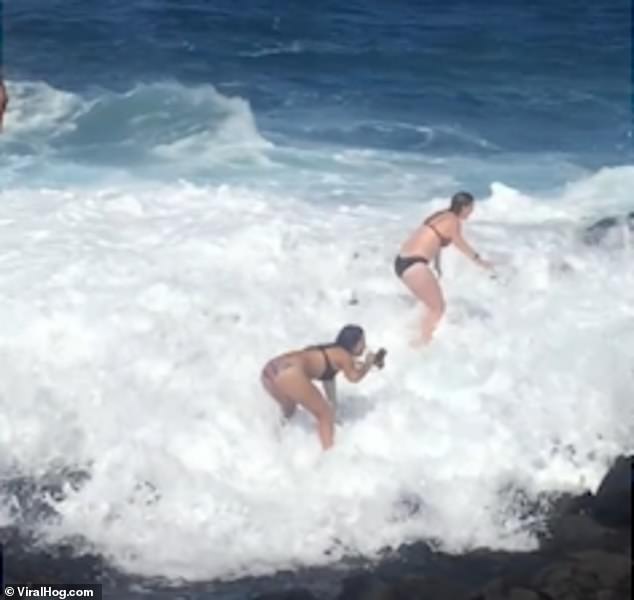 One wave smashes the women and soaks them, but they remain on their feet and continue taking pictures

The wave soaks the couple but does not knock them off balance and the defiant tourists set up for another picture.

From their vantage point on the clifftop, the onlookers can see that an even bigger wave is building and cries of ‘oh she’s still got the camera!’ and ‘there’s a bigger one coming!’ are heard.

At the last minute, the poser realises that she is about to be drenched and crouches down to lower her centre of gravity to maintain balance.

But the wave completely engulfs them and they are washed away in a cascade of water that carries them over the rocks and back towards the cliff. 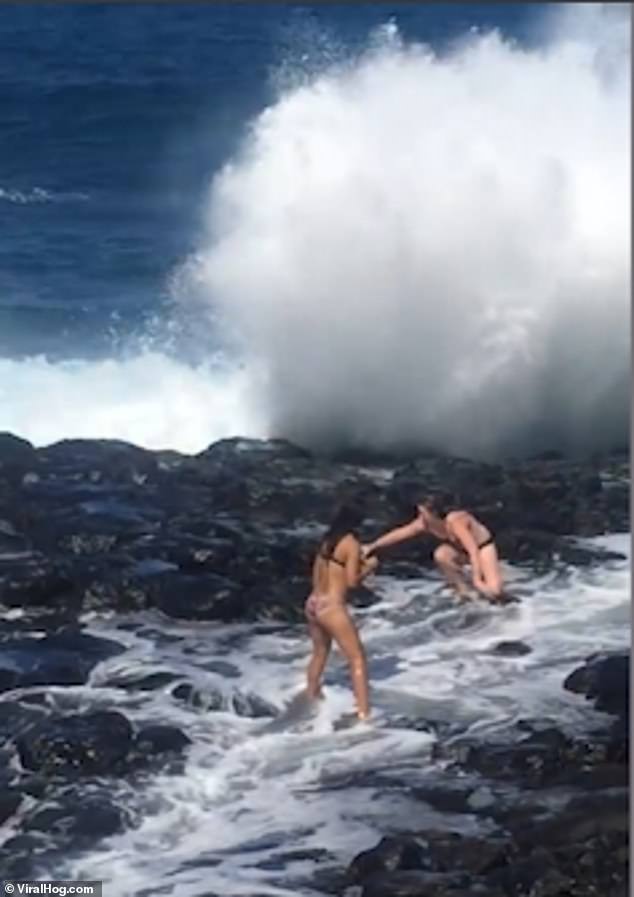 A second much larger wave is building and, having spotted it, the poser suddenly crouches down to avoid being knocked over 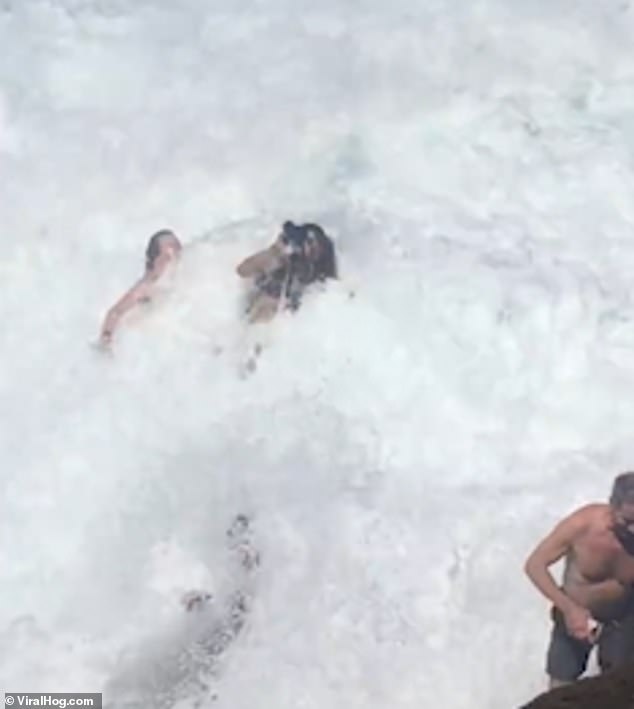 However, the surf engulfs them and the pair are swept away in a cascade of water which washes them towards the cliff

Luckily, neither of the pair were seriously in injured and only suffered some cuts.

The person who witnessed the wipeout said: ‘While I was travelling in Kauai, Hawaii I spent a day exploring Queen’s bath, where I witnessed two girls get completely taken out by a huge wave trying to get the perfect shot.

‘They were lucky enough to walk away with only a few bad scratches and a ticket on their car cause they parked illegally before heading down to the water; also a broken camera.’