Celebrity chef Adam Liaw has offered his top three tips for taking home cooking to the next level – including his ‘dirty secret’ behind the perfect winter dish.

The cookbook author said traditional cooking is all about ‘building umami’ – a Japanese word to describe the savoury taste we experience when eating food.

The 2010 MasterChef Australia winner said chefs use dozens of ingredients to boost the flavours of their dishes, including stock, miso, soy and fish sauces, chicken powder, mushrooms, cured meats or dried seafood.

‘We treat it like it’s a dirty secret,’ Liaw told the Good Food.

To save time in the kitchen, the dad-of-three said he always cuts all his vegetables for a few days worth of cooking.

‘Cooking feels like a chore because we try to do too much of it at once,’ he said.

When he’s in the middle of whipping up a meal, Liaw said he can simply toss his prepped veggies into a pan or wok ‘la minute’.

To improve the flavours in your dish, Liaw suggested slow cooking over winter.

‘Almost every bolognese in Australia could be improved by cooking it a little (or a lot) longer. I cook mine for about two hours,’ he said.

‘Stop trying to cram all of your “cooking” into the last minute. Use time to your advantage. You’ll find when you’re not rushing your food, it turns out better.’ 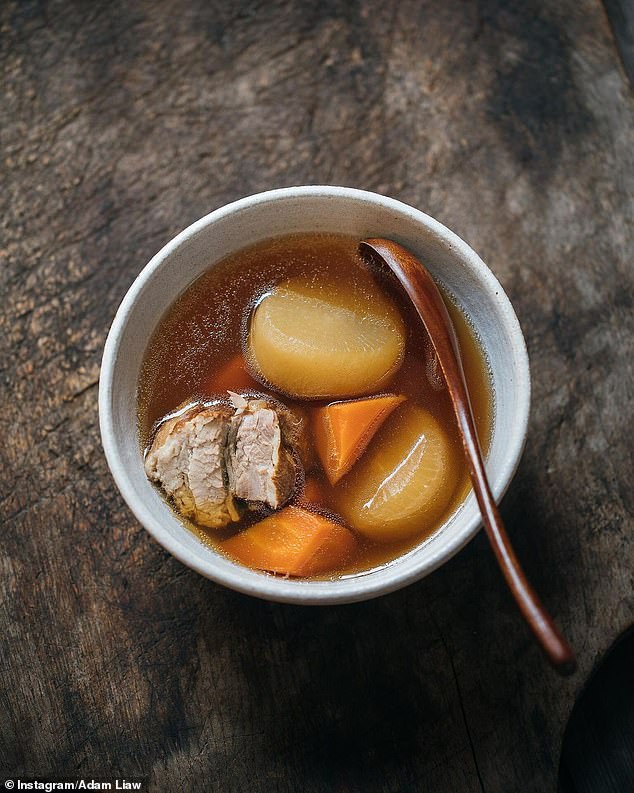 The 2010 MasterChef Australia winner said traditional cooking is all about ‘building umami’ – a Japanese word to describe the savoury taste we experience when eating food (pictured of Liaw’s monkfruit soup with pork rib, daikon and carrot)

Three ingredients every household should always keep in pantry

Adam Liaw revealed the ingredients every household should always keep in the pantry amid coronavirus – including dried mushrooms, polenta and eggs.

Liaw said dried mushrooms should be a staple in your pantry at all times.

‘They add a big punch of umami and a meaty texture to dishes, and reconstituting them in water gives you an instant mushroom stock,’ he told Good Food.

For vegetarians or vegans, Liaw said dried shiitake is perfect for grating over pasta dishes.

Liaw suggested keeping a few dozen eggs in the pantry if you do end up in isolation because you could create different savoury or sweet foods such as fried rice, cakes, omelette, boiled or scrambled eggs and even mayonnaise.

‘Eggs are quite possibly the most versatile food in the world,’ he said.

Another ingredient he suggested is polenta, in which he described it as a ‘very underrated apocalypse food’.

‘What I like about it is that is that it’s a different meal every day,’ Liaw said, adding that polenta can be served as a hot porridge, baked, fried, or grilled.

The food writer said you can substitute a missing ingredient in your dish with other alternatives so you don’t have to return to the supermarket – as millions of Australians stay at home to minimise the risk of spreading coronavirus.

Whether you need a sweet, salty or sour ingredient, the MasterChef 2010 winner said you can recreate the flavours just from what you already have in the pantry.

‘If you don’t have sugar, use honey. If you run out of soy sauce, use a bit of salt. No lemon juice? Try vinegar instead,’ Liaw said in a piece for The Good Food.

Rather than stockpiling, Liaw said the best way to make the ingredients stretch further is to ‘throw out less’.

‘If you have some odds and ends of vegetables, chop them up and throw them into that quarantine bolognese. Turn bones and offcuts into stock,’ he said.

Liaw encouraged people to ignore ‘use-by’ and ‘best before’ dates – and instead use your nose to check whether the product has gone off.

According to the Food Standards of Australia and New Zealand, most foods can be safely consumed after the best before dates but they may have lost some quality.

Liaw said there are two distinct smells to avoid if you are sussing out foods that have just edged past its use-by or best-before dates.

‘The first is putrefaction – the sour, disgusting and quite unmistakable smell of something that has gone off. Avoid,’ he said.

‘The second is rancidity. Rancid, oxidised oils have a waxy smell and while they might not make you sick immediately, they can be unpleasant tasting.’