Mattis reaffirms ‘the ironclad US commitment’ to defend South Korea

Defense Secretary Jim Mattis has reaffirmed the ‘ironclad’ US commitment to defend South Korea ahead of a planned summit with North Korean leader Kim Jong Un.

President Donald Trump and Mattis spoke on Saturday with their South Korean counterparts a day after the historic meeting between leaders of the two Koreas, and Trump said ‘things are going very well’ as he prepares for an expected summit with Kim.

Mattis and Defense Minister Song Young-moo said they were committed to ‘a diplomatic resolution that achieves complete, verifiable and irreversible denuclearization’ of the North, according to the Pentagon’s chief spokeswoman, Dana W. White.

Mattis also reaffirmed ‘the ironclad US commitment’ to defend its ally ‘using the full spectrum of US capabilities. ‘ 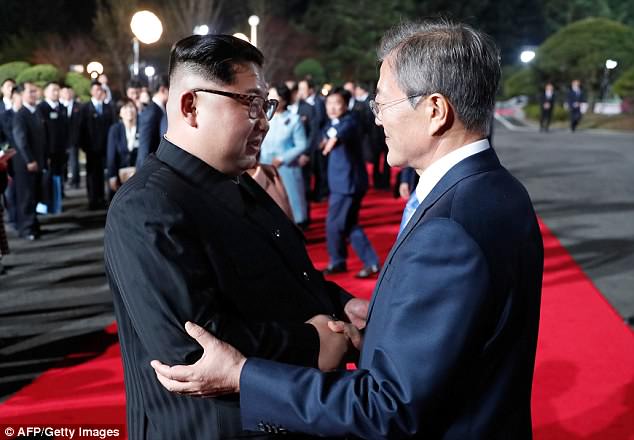 Trump tweeted Saturday that he had ‘a long and very good talk’ with President Moon Jae-in.

He also said he updated Japan’s prime minister, Shinzo Abe, about ‘the ongoing negotiations’ for an anticipated summit with Kim, tentatively scheduled for May or early June.

Moon and Kim have pledged to seek a formal end to the Korean War, fought from 1950 to 1953, by year’s end and to rid the Korean Peninsula of nuclear weapons.

Trump has said he’s looking forward to the meeting with Kim and that it ‘should be quite something.’

‘Things are going very well, time and location of meeting with North Korea is being set,’ Trump tweeted.

Trump is claiming credit for the Korean summit, but now faces a burden in helping turn the Korean leaders’ bold but vague vision for peace into reality after more than six decades of hostility.

Trump must contend with suspicions about his own suitability to conduct that kind of war-and-peace negotiation and succeed where his predecessors have failed, and whether Kim really is willing to give up the nuclear weapons his nation took decades acquiring. 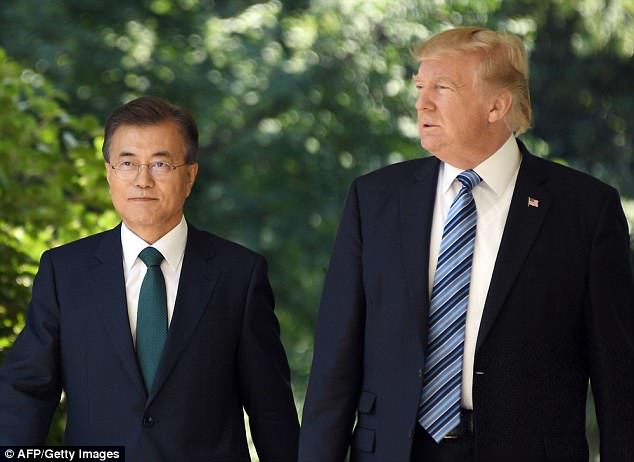 Trump, seen with Moon last June, is preparing for a summit with the North and South Korean leaders tentatively scheduled for late May or early June

‘It is still unclear whether North Korea still believes that it can have its cake and eat it too,’ said Victor Cha, who until January had been in the running to become Trump’s choice for ambassador to South Korea.

At a White House news conference with German Chancellor Angela Merkel on Friday, Trump basked in the afterglow of the meeting between Kim and Moon, and said he has a responsibility to try to achieve peace and denuclearization.

‘And if I can’t do it, it’ll be a very tough time for a lot of countries, and a lot of people. It’s certainly something that I hope I can do for the world,’ he said.

Moon and Kim have not specified what steps would be taken to formally end the war or eliminate nuclear weapons. Now the pressure to deliver results, at least on the allies’ side, has shifted to Trump.

The president pushed back against critics who say he’s being manipulated by Kim, who has abruptly shifted to diplomacy after last year’s full-scale push to become a nuclear power that could threaten the U.S. mainland.

‘I don’t think he’s ever had this enthusiasm for somebody, for them wanting to make a deal,’ Trump said in the Oval Office. ‘We’re not going to be played, OK. We’re going to hopefully make a deal. The United States in the past has been played like a fiddle.’

New Secretary of State Mike Pompeo, who as CIA director met Kim four weeks ago in North Korea, told reporters in Brussels that he got the impression that Kim was ‘serious’ about negotiating on denuclearization because of the Trump-led economic pressure campaign.

But Pompeo added a word of caution: ‘I am always careful. There is a lot of history here. Promises have been made, hopes have been raised and then dashed.’

North Korea has already called a halt to nuclear and long-range missile tests, which has helped dial down tensions significantly.

North Korea was hit with unprecedented economic restrictions during 2017, when the US and North Korean leaders traded threats while Kim pushed his nation to the verge of being able to fire a nuclear-tipped missile at the US mainland.

The diplomatic climate has changed dramatically this year, as Kim has ended his international seclusion, reaching out to South Korea, the US, and China.

Mattis has said the US is ‘optimistic right now that there’s opportunity here that we have never enjoyed since 1950’ and any progress will be up to the diplomats. He was referring to the year the Korean War broke out.

The fighting, which also involved China, cost hundreds of thousands of lives and ended with the declaration of an armistice, not a peace treaty. That has left the peninsula in a technical state of war for decades.