Secretary of Defense Jim Mattis said Wednesday that there was still room for diplomacy in dealing with North Korea’s provocative ballistic missile launches, after President Donald Trump said negotiations were ‘not the answer.’

‘We’re never out of diplomatic solutions,’ Mattis said as he went into a meeting with South Korea Defense Minister Song Young-Moo.

‘We continue to work together and the minister and I share responsibility to provide for the protection of our nation our populations and our interests, which is what we are here to discuss,’ he added.

‘We are never complacent.’

The comment came after Pyongyang elevated the crisis over its growing potential nuclear threat with the test launch of an intermediate range ballistic missile over Japanese territory on Tuesday.

‘We’re never out of diplomatic solutions,’ Secretary of Defense James Mattis (left) said as he went into a meeting with South Korea Defense Minister Song Young-Moo (right) at the Pentagon in Washington on Wednesday

Before Mattis spoke, Trump had tweeted: ‘The U.S. has been talking to North Korea, and paying them extortion money, for 25 years. Talking is not the answer!’

Before Mattis spoke, Trump had tweeted: ‘The U.S. has been talking to North Korea, and paying them extortion money, for 25 years. Talking is not the answer!’

North Korea leader Kim Jong-Un has promised more missile flights over Japan, insisting his nuclear-armed nation’s launch was a mere ‘curtain-raiser,’ in the face of UN condemnation and U.S. warnings of severe repercussions.

The Hwasong-12 intermediate-range missile unleashed by Pyongyang represented a major escalation of tensions over its weapons programs.

The missile has the potential of reaching the U.S. military base at Guam in the Pacific.

In July, North Korea test-launched an intercontinental ballistic missile that theoretically could carry a nuclear bomb to the continental United States.

After the latest launch, Trump said that ‘all options’ were on the table, reviving his implied threat of pre-emptive U.S. military action just days after congratulating himself that Kim appeared to be ‘starting to respect us.’

On Tuesday, the UN Security Council – which has already imposed seven sets of sanctions on Pyongyang – unanimously condemned the North’s ‘outrageous’ actions, calling them ‘not just a threat to the region, but to all UN member states.’

North Korea must ‘abandon all nuclear weapons and existing nuclear programs in a complete, verifiable and irreversible manner, and immediately cease all related activities,’ the Security Council said.

Mattis has not been afraid to flex his independence in recent days.

On Tuesday, Mattis released a statement saying that transgender soldiers currently enlisted in the military may continue to serve while the Pentagon conducts a study of Trump’s order to ban them from the armed forces.

Mattis said in a statement released Tuesday that the Pentagon, in consultation with the Department of Homeland Security, will develop a plan that ‘will promote military readiness, lethality and unit cohesion.’

Trump surprised Pentagon leaders in July by announcing via Twitter the ban on transgender people serving ‘in any capacity’.

The transgender ban reverses a plan launched by his predecessor Barack Obama that saw the military accept openly transgender recruits.

A day earlier, a video clip of the defense secretary giving a motivational speech to soldiers in Jordan went viral on social media. 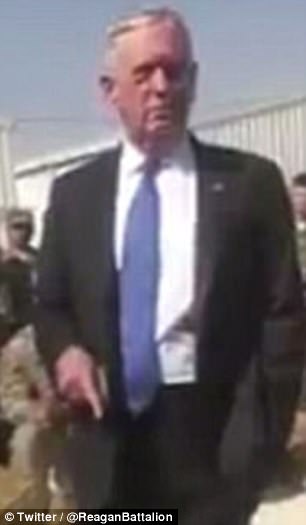 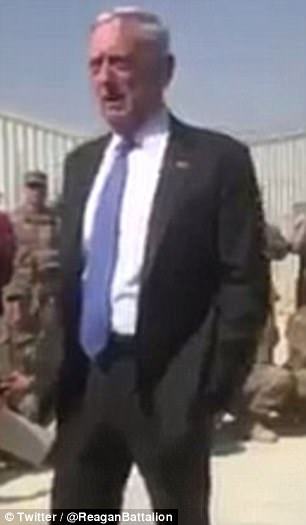 Mattis has not been afraid to flex his independence. On Tuesday, Mattis released a statement saying that transgender soldiers currently enlisted in the military may continue to serve. On Monday, video emerged of him talking to soldiers in Jordan and urging them to ‘hold the line’

The retired general can be seen asking the service to not let recent political divisions inside the United States distract them from their duty.

‘You’re a great example for our country right now and it’s got problems,’ Mattis told the servicemen.

‘You know it and I know it. It’s got problems we don’t have in the military. And you just hold the line, my fine soldiers, and sailors and airmen and Marines.’

‘Just hold the line until our country gets back to understanding and respecting each other and showing it,’ he added.

A number of people interpreted those remarks as an implicit criticism of Trump, particularly since those comments were made against the backdrop of the aftermath of the race-fueled violence in Charlottesville, Virginia.

An anti-racist demonstrator was killed and nearly two dozen others were injured when a suspected neo-Nazi rammed his car into a crowd that gathered to protest a white supremacist rally.

Trump angered many when he refused to issue an unequivocal condemnation of the white supremacists.

Instead, he said ‘both sides’ were to blame for the violence and that there were ‘very fine people’ among the white nationalist demonstrators.