Maude Apatow posted a loving tribute on her Instagram in celebration of her famous parents 25th wedding anniversary.

The Euphoria actress shared adorable photos of her mother, Leslie Mann, and father, Judd Apatow, posing on a boat in 1920s inspired costumes.

Mann is known for starring in films such as 17 Again alongside Zac Efron.  Apatow has made a name for himself by directing classic films such as The 40-Year-Old Virgin.

The first photo Maude shared was with herself, her mother, 50, and father, 54,  posing for a quick snap. Her parents were seen smiling while their daughter puckered her lips at the camera.

The 24-year-old wore a long, black dress with thin straps. The gown had a small cut-out on the back to add a fashionable edge.

To accessorize the outfit, she wore a long, pearl necklace that was draped around her neck in classic 1920s style.

Her mother, Leslie, wore a black halter gown with cut-outs on the sides and a bow that tied at the back of her neck. She wore a pair of black, elbow length gloves with a glamorous pearl bracelet on her left arm. 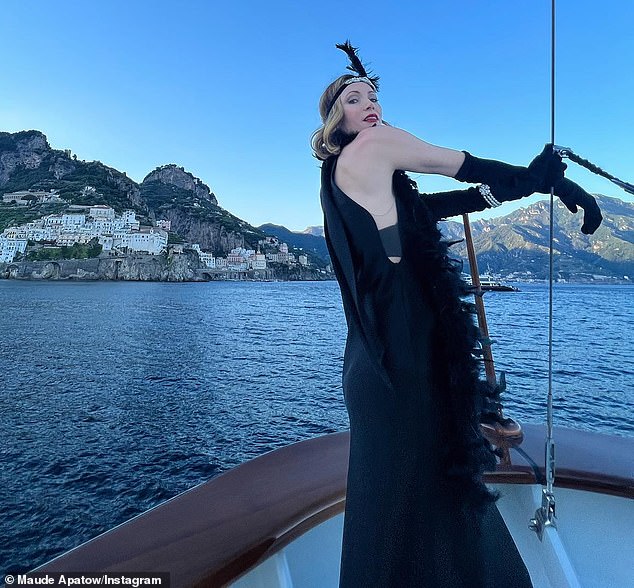 Gorgeous star: Maude snapped a photo of her mother, Leslie, fashionably posing at the front of the boat in her 1920s costume

Judd donned a sandy-colored suit which was made of a light fabric for the summer weather. He added a white dress shirt underneath to keep the look simple yet classic.

In the second photo uploaded, Maude snapped a picture of her mother posing at the front of the boat. The backdrop showed a coastal city behind her just as the sun was beginning to set. 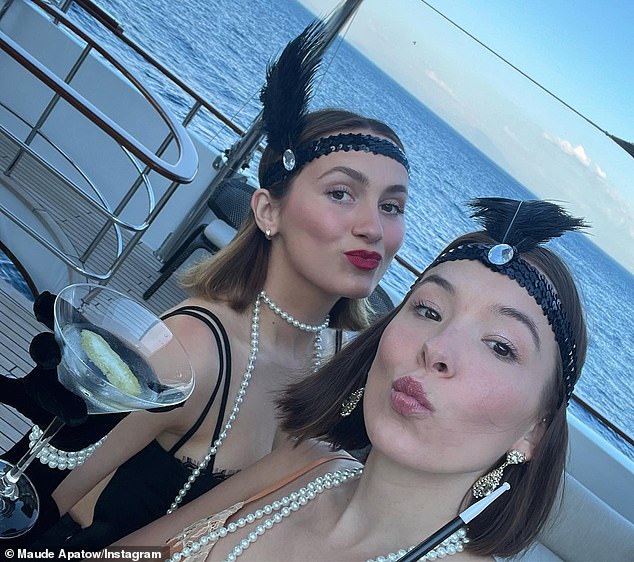 Party like its 1920: The Euphoria actress is seen posing with another guest at a celebration for her parents 25th wedding anniversary

In the caption, the star typed out, ‘Happy 25th anniversary to my parents. I love you.’ She added a heart emoji to make the post loving and sentimental.

Maude has worked hard to make a career for herself in the entertainment industry, and has shown her talent as an actress playing the role of Lexi in the HBO series, Euphoria.

Her parents have offered both inspiration and motivation for the actress to pursue her passion.

In an interview with the Los Angeles Times, The King Of Staten Island actress stated that she views father as, ‘a mentor figure in my life.’ 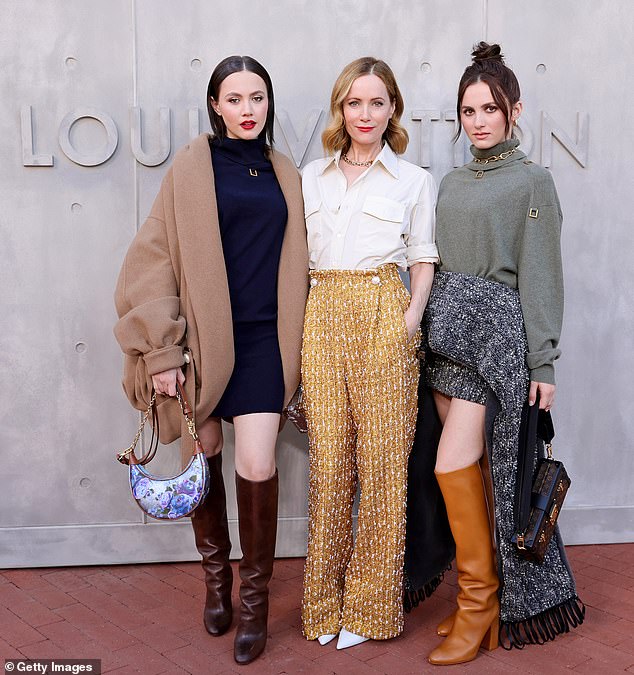 Family sticks together: Maude is pictured with her mother, Leslie Mann, and sister, Iris Apatow, as they attended the Louis Vuitton 2023 Cruise Show in San Diego

Maude also has aspirations to not only be an actress, but to eventually have the opportunity to work behind the camera and direct.

The star explained to the publication that her father is a big help in assisting her to gather necessary skills.

‘I want to be a director someday, and getting to watch my dad do what he does is very important to me,’ she stated.

Maude and her family have a close bond and relationship, appearing to be each other’s biggest supporters and enjoying family time together.