Theresa May isn’t the only ex-leader to experience a hideous first half of 2019. Former Inter Milan captain Mauro Icardi is also having a horrific time. On the last Sunday of the season the striker was booed off the pitch after failing from the penalty spot in his team’s crucial match at home to Empoli.

His saved spot-kick wasn’t fatal, because Inter won 2-1 to qualify for the Champions League. But there is doubt over whether Icardi will be there to appear in the competition next season.

Rewind to last autumn and the Argentine striker was thriving. His first crack at the Champions League was going swimmingly. The Italians defeated eventual runners-up Spurs in the group stage and Icardi was transferring his predatory skills to club football’s biggest tournament. 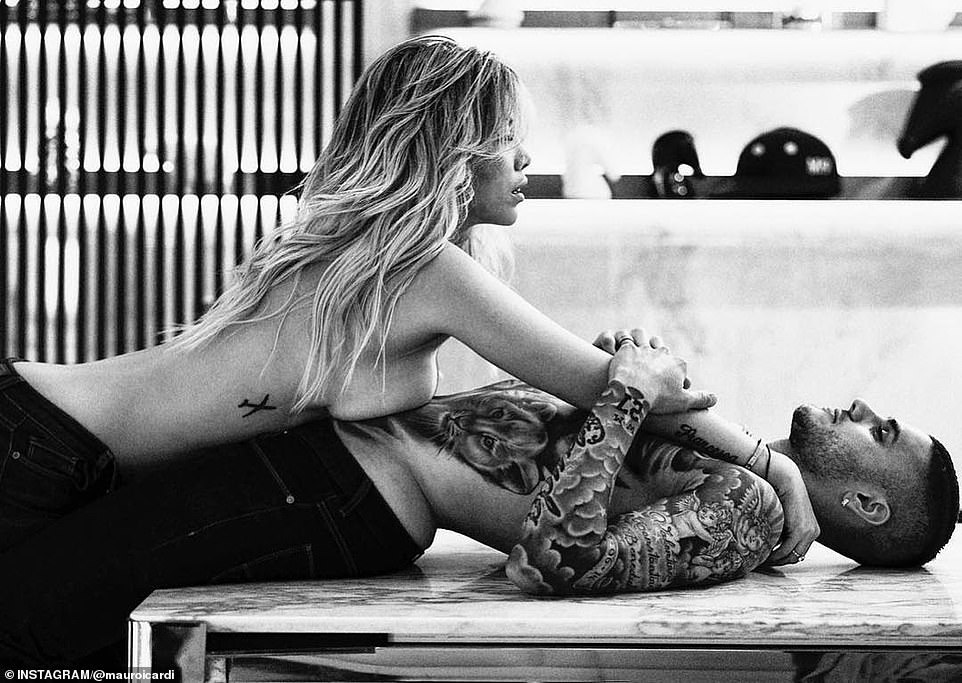 Then everything fell apart in February. He was stripped of the captaincy a few days after his 26th birthday. Official reasons were hard to come by, but the club (and squad) were supposedly perturbed by his daily behaviour.

The last straw came when his wife and agent Wanda Nara claimed live on Mediaset programme Tiki Taka that she’d like Inter to sign a few midfielders ‘who could give her husband some decent service’.

Goalkeeper Samir Handanovic took the skipper’s armband, but the drama wasn’t over. Icardi suffered a knee problem and was ruled out for several weeks. Many fans and reporters questioned whether he’d ever play for the team again. Others didn’t believe there was any injury, just a fallen hero with bruised pride.

Inter needed him though, just like he needed them. Icardi has been a guarantee of goals since arriving from Sampdoria in 2013. Initially his compatriot Lautaro Martinez did well in attack, but once Icardi returned to fitness he was required for Inter’s top-four push.

The controversial No 9 made his comeback in a low-key away match to Genoa on April 3, converting a penalty in a 4-0 triumph. He ended the campaign as a first-team player, but didn’t look himself.

His final haul of 11 league goals was his worst since the 2013-14 season. In all competitions Icardi scored 12 fewer than last season, despite playing a game more. Only he knows the cause of his sluggish form in the second half of the campaign. Was he rusty from his lay-off, or demotivated and wounded by the captaincy row?

Even his staunchest supporters were fed up with their former idol. Extreme sections of the San Siro booed him at home games, others bit their lip, and put the good of the team first. 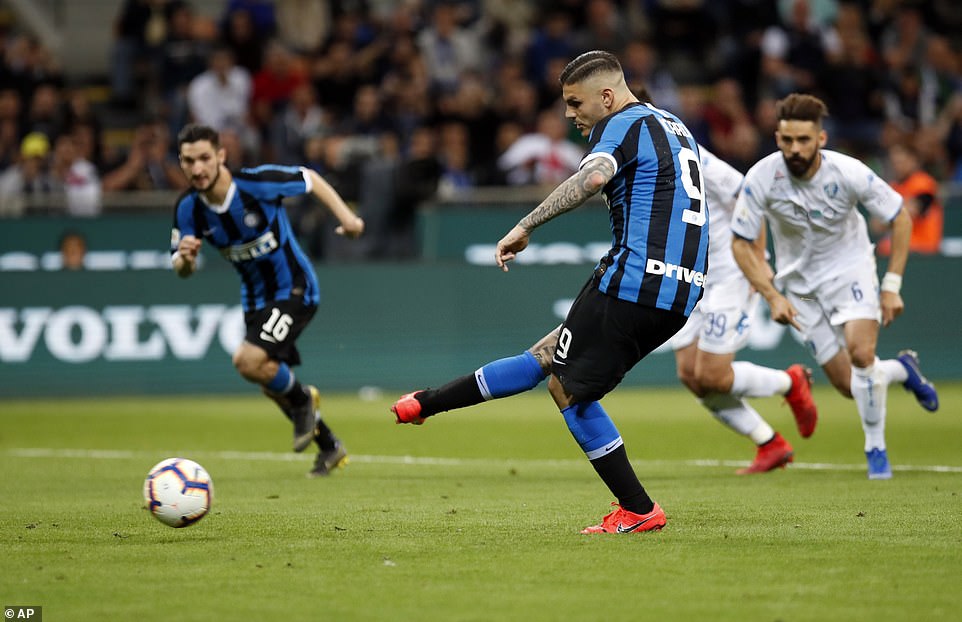 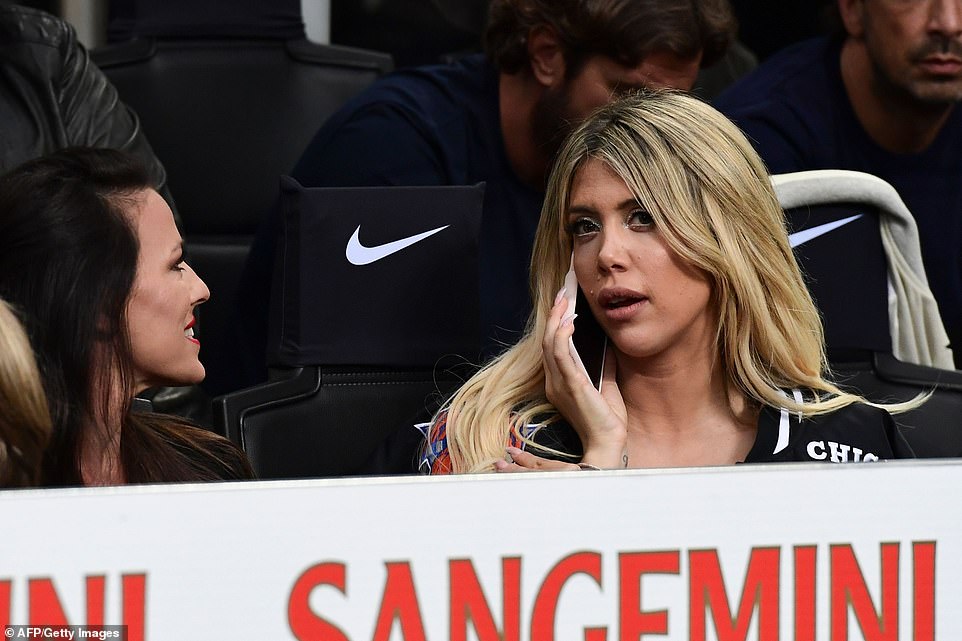 As usual Wanda watched the match from the stands; as his agent she could soon be negotiating Icardi’s transfer 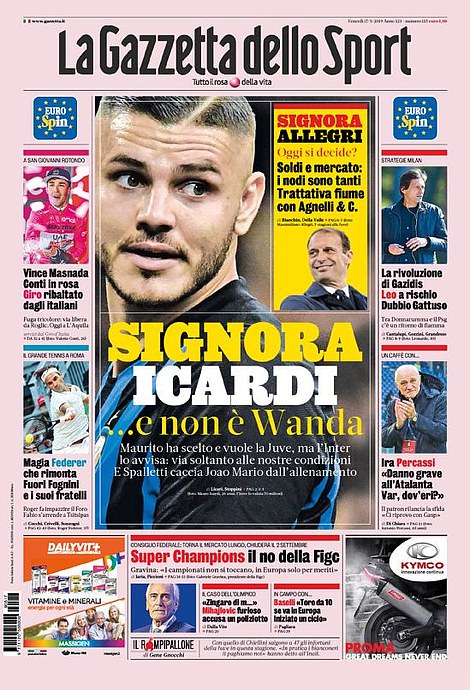 The Italian press has been full of talk about Icardi joining Juventus, although that transfer has obstacles to overcome

Wanda Nara has re-iterated that they want to stay at Inter. She told satire show Striscia la Notizia that ‘we are a family of Inter fans. We live in Milan and we are staying. I am 100 per cent sure. We have renewed our children’s subscriptions at their schools here.’

Cynics suggest that she would say that. Nara might not be to everyone’s taste, but she certainly isn’t stupid. Before the final game of the season Icardi posted an Instagram picture detailing all his goals for Inter. A way to remind his employers of his importance and demonstrate his love for the three-times European champions.

The former Barcelona youth-team player regularly uses social media to get his messages across. Sometimes he’s subtle, other times it’s heavy-handed. At the end of May, journalist Franco Piantanida counted 2,048 posts by the Argentine since he joined Inter. That’s just under one a day since July 2013. ‘Maurito’ is a master of the art.

But it was another Instagram offering from his wife that really stirred things up. Nara posted some racy, black and white photos of the couple. Instead of the ‘spot the ball’, it was ‘spot the clothes’. Critics said it wasn’t the right time, given the team’s patchy form at the end of the season.

Fabio Capello told Sky: ‘None of my players ever published nude photos. I don’t know if the rest of the team would let him back in the dressing room. It wouldn’t be accepted.’ Mrs Icardi quickly reminded the ex-Milan and England boss that he managed Fabio Cannavaro and David Beckham. That duo weren’t scared of the occasional naked snap.

Nara was less refined when she reacted furiously to a remark from TV co-commentator Daniele Adani. Icardi struck a consolation spot-kick in Inter’s 4-1 thrashing at Napoli, and Adani called it a ‘useless’ goal. Her video response was a crude verbal attack on Adani’s sister.

However much the couple tell the world they want to remain in the Inter family, not many people believe Icardi will be wearing the famous blue and black stripes next year. To call it complicated is the understatement of the century. 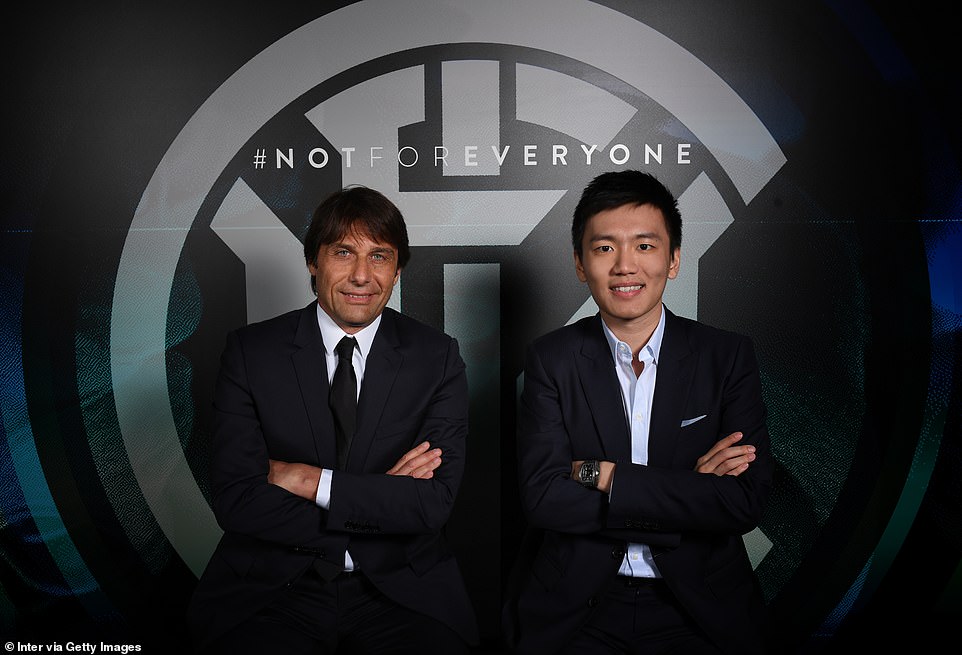 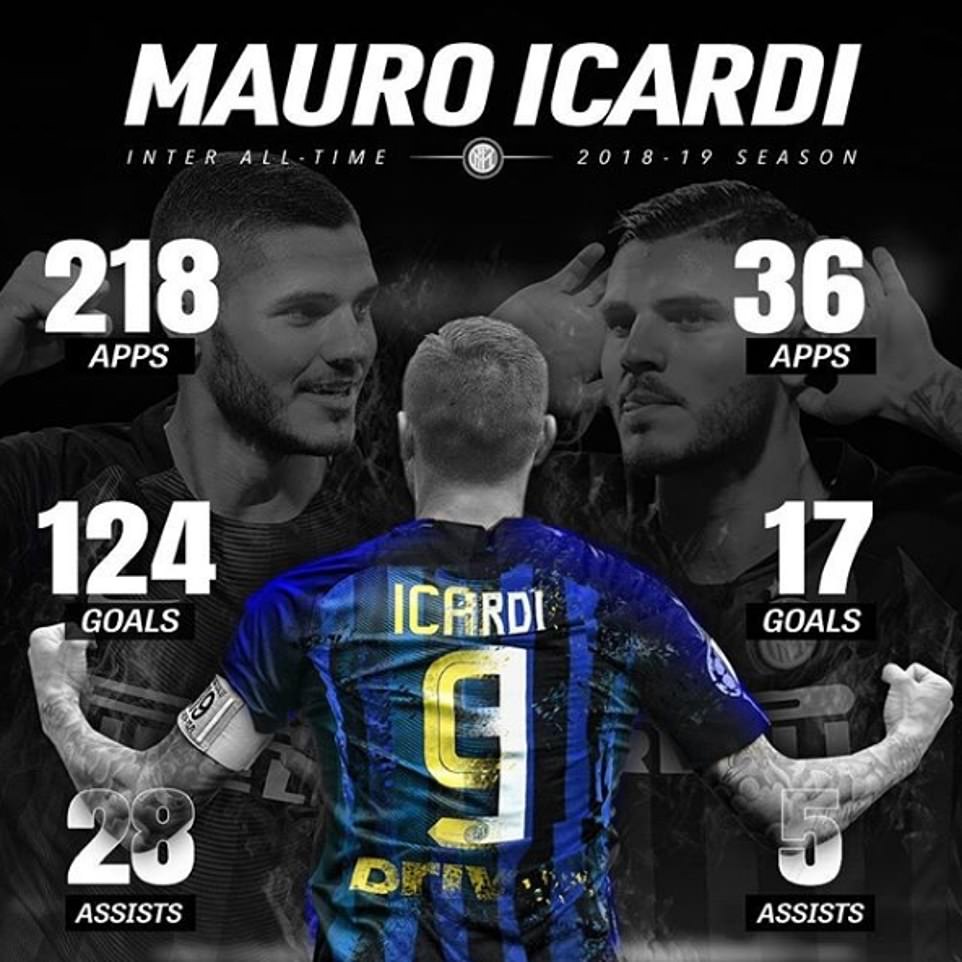 Pietro Guardagno writes for the Corriere Dello Sport, and says: ‘The split between Icardi and the rest of the dressing room is beyond repair. Even his closest allies in the squad have had enough off his antics. He is a shadow of his former self. He went off to whistles from the fans in the last two home games of the season.

‘Inter have not received any offers for him. Juventus are certainly interested in his on-field ability. But Juve have got to deal with Gonzalo Higuain, who is returning. You can’t have Icardi and Higuain.’

A swap deal with Paulo Dybala could send Icardi up the road to Turin, but it’s unknown whether Juve’s No 10 is enthusiastic about joining the Nerazzurri. Plus the off-field attention that Icardi and his wife attract doesn’t correspond with the Juventus way of doing things.

And just when it already seems a mess, there is the Antonio Conte Factor. The Ex-Chelsea and Italy boss has taken over from outgoing Luciano Spalletti at Inter and is not thought to be keen on Icardi. Conte is reportedly desperate to land Romelu Lukaku, and Inter are heavily linked with Roma’s Edin Dzeko. Icardi could be the odd-man out. 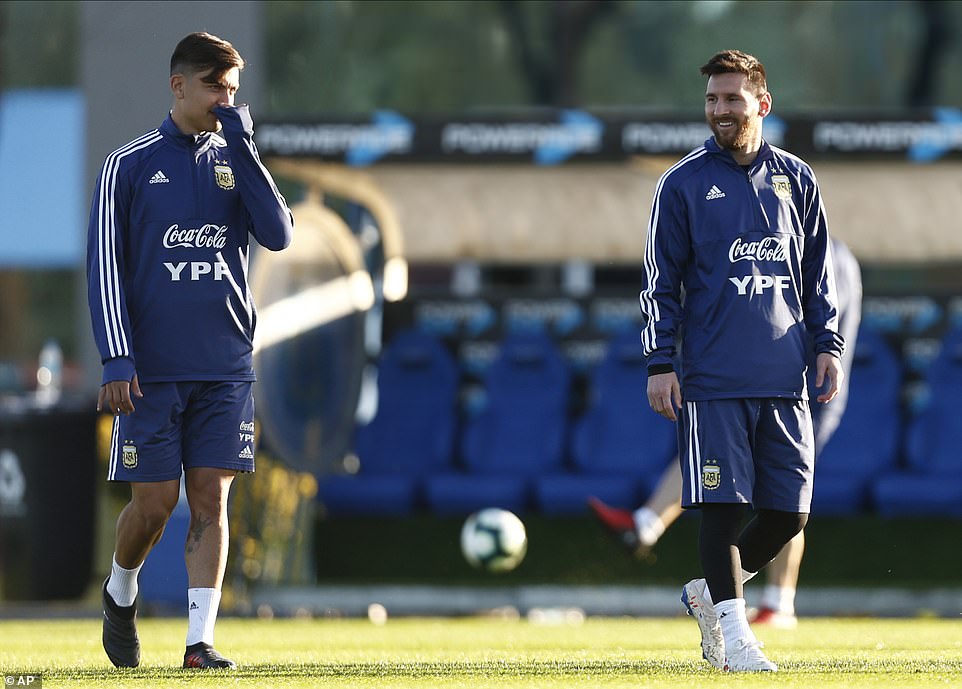 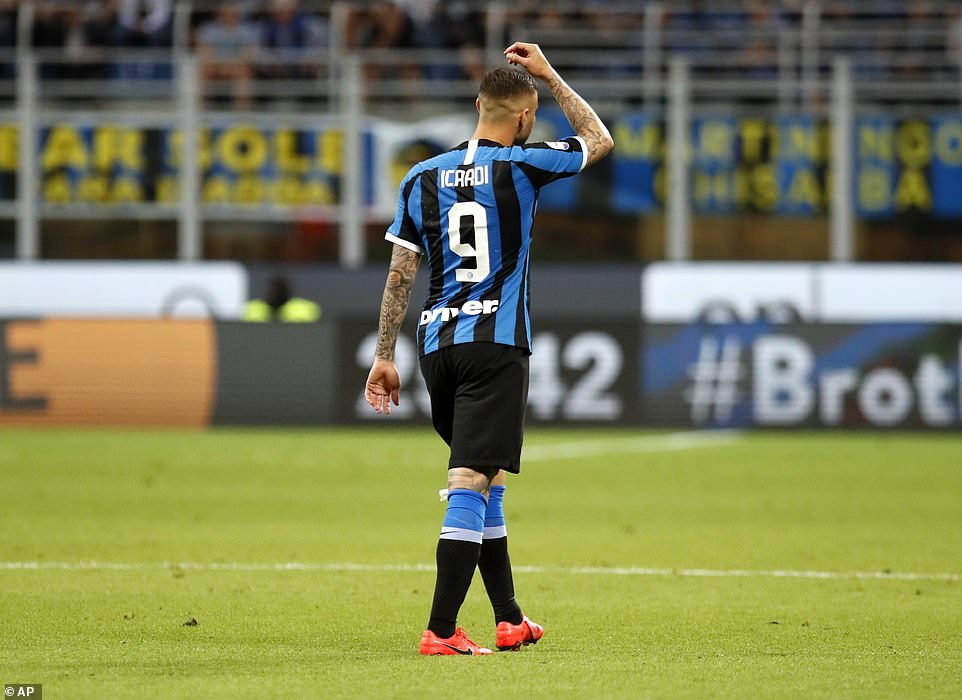 Icardi has been dropped by Argentina, another reason to leave Inter, and the end looks nigh for a once great partnership

Things are no brighter on the international horizon. Last November Icardi scored his first goal for Argentina in a friendly against Mexico. They were rebuilding after their World Cup 2018 debacle, and Maurito looked the natural heir to Higuain.

But the chaotic events of this second half of the campaign have cost him dearly. Icardi is not in coach Lionel Scaloni’s Argentina squad for the Copa America. Instead of combining with Lionel Messi, he’ll be watching on television. His Inter team-mate and friend Lautaro is involved, however.

It’s a sad shambles. But football has often shown us that a player can relaunch a stalling career with the right attitude. Of the two beleaguered former leaders, Mauro has got the edge over May.