Max Verstappen left it late to overtake Charles Leclerc and win his first race of the season in Saudi Arabia.

It wasn’t quite as last-gasp as his move on Lewis Hamilton to win the controversial Abu Dhabi Grand Prix and seal his first championship last year.

However, he left it four laps from the end to pass the Ferrari driver after their second thrilling battle for the win in as many weeks. 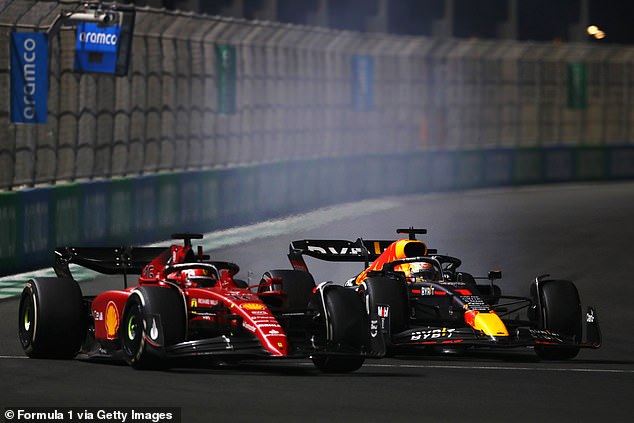 Speaking after the race, Verstappen said he had to be patient before making his move on the Monegasque driver.

He said: ‘It was a really tough race but good race. We battled hard and we had to play the long game.

‘It wasn’t easy, we were playing smart tricks in the final corner, but we managed to get ahead. We are happy that we finally kick-started the season.’ 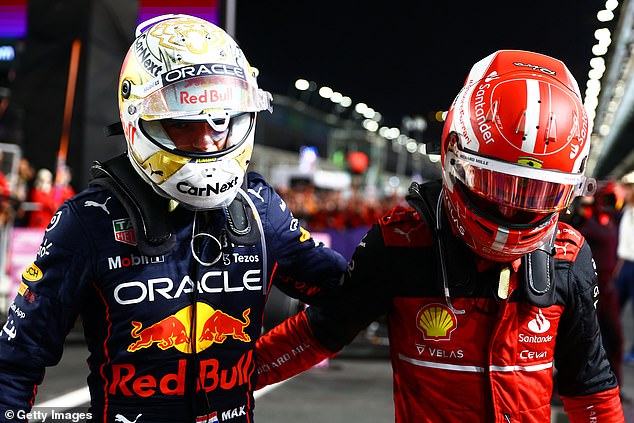 The pair benefitted from a safety car which allowed them to jump the unlucky leader Sergio Perez – who had already pitted before Nicholas Latifi’s crash changed the race.

LeClerc seemed comfortable out front after that as the Dutchman was told by his Red Bull team to save his tyres for a late race challenge.

A Virtual Safety Car, brought out by the retirements of Fernando Alonso and Daniel Ricciardo, led to Verstappen closing the gap on Leclerc as cars got back to speed.

The reigning champion passed Leclerc into the final corner, only for the Ferrari driver to re-take him into Turn 1 with the aid of DRS.

Verstappen then failed to get pass his rival on the next lap as they both played chicken with the DRS line – both trying to stay behind one another to gain a speed advantage down the start/finish straight. 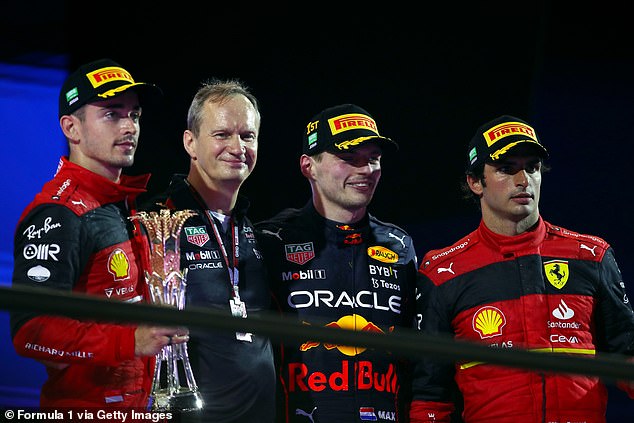 The Dutchman eventually made the move on the Ferrari driver into Turn 1 and then held off Leclerc who applied pressure in the last laps.

Leclerc, who won last week in Bahrain, said: ‘It wasn’t enough today, but I really enjoyed that race.

‘It is hard racing but fair. And every race should be like this. I wanted to win today. Max did a great job.

“I was pushing like I have rarely pushed before, to the absolute limit, but of course there is respect. However, I am disappointed.’

Leclerc now has a 20 point gap over Verstappen at the top of the title race, with Carlos Sainz in the second Ferrari sandwiched by the pair in second.