Max Verstappen is the aspiring world champion who would rather poke a screwdriver in his eye than attend a fashion show or inhabit the celebrity world.

Yes, he holidayed as a boy with Michael Schumacher and family, but if he took anything from the now stricken German, it was an impression of his work ethic rather than any associated sense of glamour or grandeur.

So sitting in Red Bull’s hospitality area at Silverstone, Verstappen is typically stripped of all fripperies. While Lewis Hamilton, who trails the Dutchman by 32 points ahead of Sunday’s British Grand Prix, walked into the paddock in snazzy catwalk clobber, for Verstappen it is simple jeans and Red Bull T-shirt and cap.

Celebrity pals? No, thanks.

But although Verstappen doesn’t seek acclaim, it stalks him, especially in Holland, where he is a national hero and excites a huge army of travelling orange-clad fans with their trademark flares.

‘I wouldn’t hang out with celebs just for my profile,’ says the 23-year-old, whose father, Jos, was team-mate to Schumacher at Benetton in the 1990s. ‘With some well-known people you can strike a good connection and build up a friendship, but I would only meet those I think are friends.

‘I won’t call them mates when they are not mates, but just famous people. I want to spend time with family and real friends. 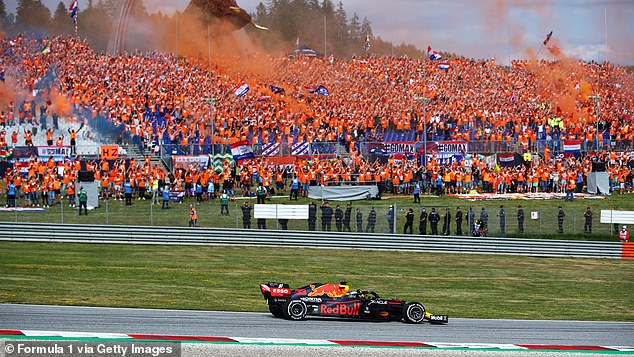 ‘I don’t spend too much time checking my Twitter or Instagram accounts to see how many followers I have (1.7million and 5.1m respectively, compared to Hamilton’s 6.4m and 23m) or worry about how many ‘likes’ my posts get. I am not interested in that. If I am in Holland, which is not often, I mostly stay in the house, again with family and friends.’

This sounds as if it may be a dig at Hamilton — the unapologetic Instagram devotee — so I ask how the pair of them get along.

‘Good, every-thing’s fine,’ says Verstappen. ‘There’s mutual respect. It’s just that we live different lives, so that limits how much we could meet away from the track anyway.

‘I don’t pay any attention to mind games. These things don’t bother me. I just focus on the track in the best way possible. Anything beyond that is not relevant to me.’ 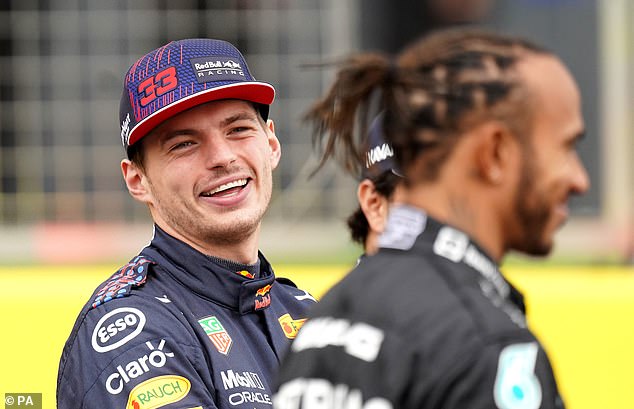 Unlike his championship rival, Lewis Hamilton, the Dutchman likes to keep a fairly low profile 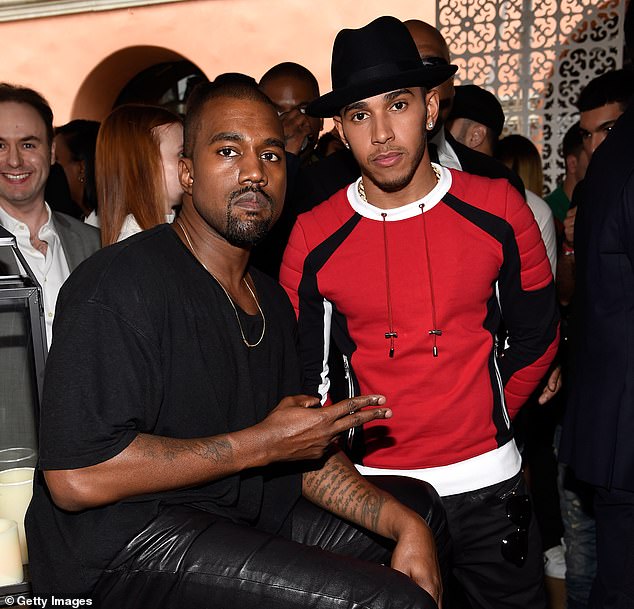 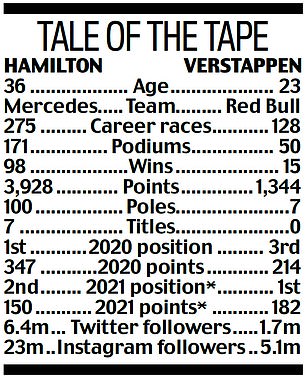 That mindset has taken the tough and increasingly rounded racer to victories in all of the last three races and five in the nine rounds of 23.

There is an unvarnished honesty to Verstappen. He knows his own mind and he sticks to it.

He is not complex, either. He can, though, be feisty in the midst and aftermath of competing or if riled.

Indeed, I asked him once what the explanation was for a bad run of crashes he had endured a few years back. ‘I’ll head-butt the next person who asks me about that,’ he said.

His racing apprenticeship was spent with his father in a sparklingly clean workshop at the back of a roofing business belonging to close family friends, in Maasbracht, a town in south eastern Holland.

After taking up karting before his fifth birthday, he sprinted to a record of 59 victories in his first 60 races, and would have won them all but for breaking down. A prodigy was emerging. He arrived in Formula One in 2015 as the youngest driver ever at 17 years and 144 days.

He was not even old enough to drive on the roads unaccompanied and 1997 world champion Jacques Villeneuve called his early inclusion an ‘insult’. The FIA changed the rules to stop anyone so youthful following in his tracks.

But Red Bull’s motorsport adviser Helmut Marko said at the time: ‘He is like Ayrton Senna. We are not playing the lottery.’ 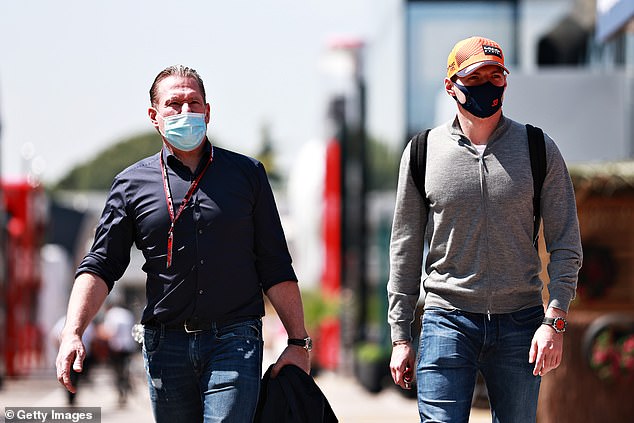 Verstappen reveals he has a very good relationship with father, Jos, who watches every race

Good genes lay behind Max’s speedy progress. His mother, Sophie Kumpen, was a fine karter, twice Belgian champion, and mother and son remain close, as Max does with sister Victoria.

Jos, now 49, lives in Cannes, not far away from his son’s Monaco home.

How are relations with his dad? Has the kinship run more smoothly than Hamilton’s with his father, Anthony, another dad who tutored a talented son to reach for the stars.

‘Things are very good between us,’ says Verstappen. ‘My dad comes to most of my races and we talk every day about all things, not just Formula One.

‘He did so much for me in my younger years and, with all the commitment and passion he put in, I felt obliged to work hard and succeed. I would never have forgiven myself for the rest of my life if I hadn’t after all he did for me.

‘I saw him preparing my engines and he was looking to do what he could to gain an extra tenth or a fraction more horsepower. It was inspiring. It gave me that mentality always to learn.’ 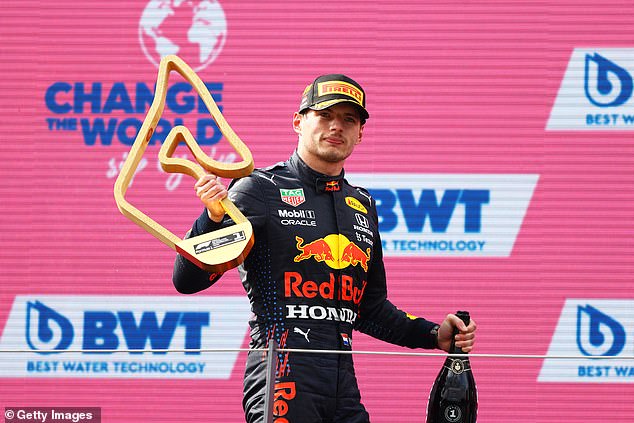 Jos could be tough and when Verstappen crashed on the second lap of an important karting championship in Sarno, southern Italy, he did not speak to his son on their journey back home. Nor for an entire week.

But their relationship has a nice balance these days. As Verstappen says: ‘He knows that I have to go my own way and make my own choices.’ 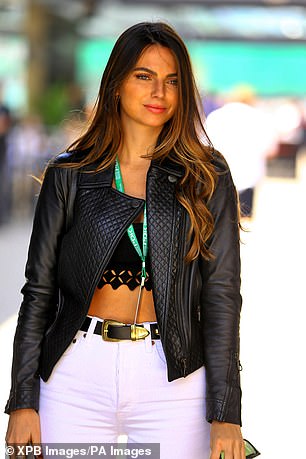 His off-track contentment has been helped over the past year by his relationship with Kelly Piquet, daughter of three-time world champion Nelson

His off-track contentment has been helped over the past year by his relationship with Kelly Piquet, daughter of three-time world champion Nelson. He mostly keeps details private, though she has been seen in the paddock and celebrating his recent successes in the pit lane.

This weekend Verstappen faces a pro-Hamilton crowd of 140,000 and supposed upgrades on the defending champion’s Mercedes.

‘I don’t get intimidated,’ declares Max, who is happier than Larry at Red Bull, and no wonder given the progress they have made.

‘But I don’t want to make any predictions about the season. It is difficult to call. So many things come into it.’

I asked what advice he would give a driver new to Formula One. ‘Be yourself,’ he says. ‘You have to believe you are the best driver out there.

‘You have to think every driver out there is slower. But never that you are good enough.’

He might as well have been talking to himself.