Theresa May will dare Tory Brexiteers and Labour to throw Britain into ‘chaos’ by voting down her Chequers plan once a deal is done with the EU.

The Prime Minister is determined to stake the future of the country on her blueprint despite a revolt by her own MPs and Jeremy Corbyn vowing to oppose it in the Commons.

She will do what is ‘best for the nation’ by compromising instead of putting the unity of her own party first, Cabinet allies told MailOnline.

The high-stakes gamble paves the way for a massive moment in Parliament as Mrs May demands MPs of all parties choose between her deal or ‘market panic’ and jobs losses.

Despite an apparent stand-off with EU leaders at the Salzburg summit earlier this month, government sources are increasingly confident that there will be a divorce deal and the outlines of a future trade relationship agreed by mid-November.

Theresa May (pictured at Tory conference today) will do what is ‘best for the nation’ by compromising instead of putting the unity of her own party first, Cabinet allies say

The package is likely to be put to the Commons within weeks, as Mrs May tries to build on momentum from a resolution to the negotiations.

A Cabinet minister admitted that the situation was ‘very tight’ and the government was likely to have to rely on some votes from Labour and the SNP.

‘It will be a bumpy ride. The seat belt light will go, flight crew will be told to get to their jump seats,’ they told Mailonline.

‘But there will be a deal. We will get movement over the next eight weeks.

‘This is a prime minister who is finely attuned to this parliament, and what will get through. People have to be pragmatic.

‘Labour is going to have a decision to make. They will be going against not just the government, but 27 EU leaders who will have agreed it.

‘If we do not get a deal through parliament there will be market panic, jobs will start moving. That is chaos.

‘The same goes for Brexiteers. They will have businesses and constituents telling them that they want this settled – these people have to think about the consequences of their actions.

‘The PM will make clear that she is doing what is best for the nation.’ 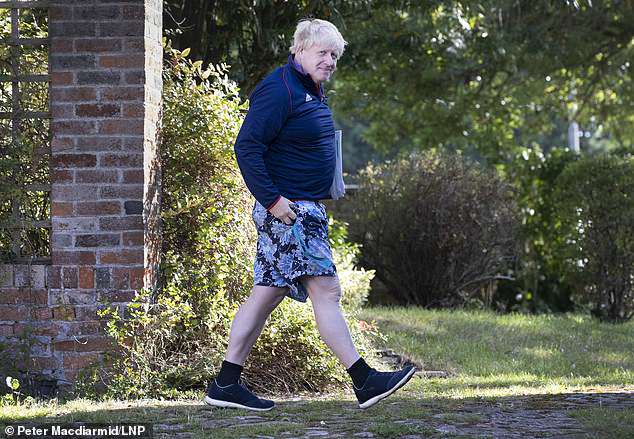 Boris Johnson (pictured outside his Oxfordshire home yesterday) ensured the focus is still on his own leadership ambitions, using an interview with the Sunday Times to swipe: ‘Unlike the Prime Minister, I campaigned for Brexit

Mrs May’s determination to press on was underlined despite Boris Johnson launching another vicious attack on her Chequers plan – branding it ‘deranged’ and ‘preposterous’.

In one bruising jibe, Mr Johnson pointed out that she was a Remainer during the referendum two years ago – whereas he is a true believer in the project.

And he urged the government to back ambitious projects like building a bridge between Northern Ireland and Scotland.

But a defiant Mrs May shot back that her critics were ‘playing politics’ and insisted she is ‘not bluffing’ about driving a hard bargain with the EU.

Speaking during an interview on the BBC’s Andrew Marr Show to kick off Tory conference, Mrs May said: ‘I do believe in Brexit.’