Maye Musk is just one day away from her 70th birthday, but she has made it clear that her modeling career is only just beginning.

The 69-year-old mother of Tesla CEO Elon Musk had plenty to smile about while striking a pose in a  bright red cocktail dress for her latest shoot featured in the May issue of Harper’s Bazaar.

In an accompanying interview with Esther Wojcicki, the mother of YouTube CEO Susan Wojcicki, Maye revealed that she feels things are ‘really going to take off’ for her in her 70s — although she would have never said it before.

Stunning: Maye Musk, 69, modeled a red cocktail dress by Stella McCartney in her latest shoot featured in the May issue of Harper’s Bazaar 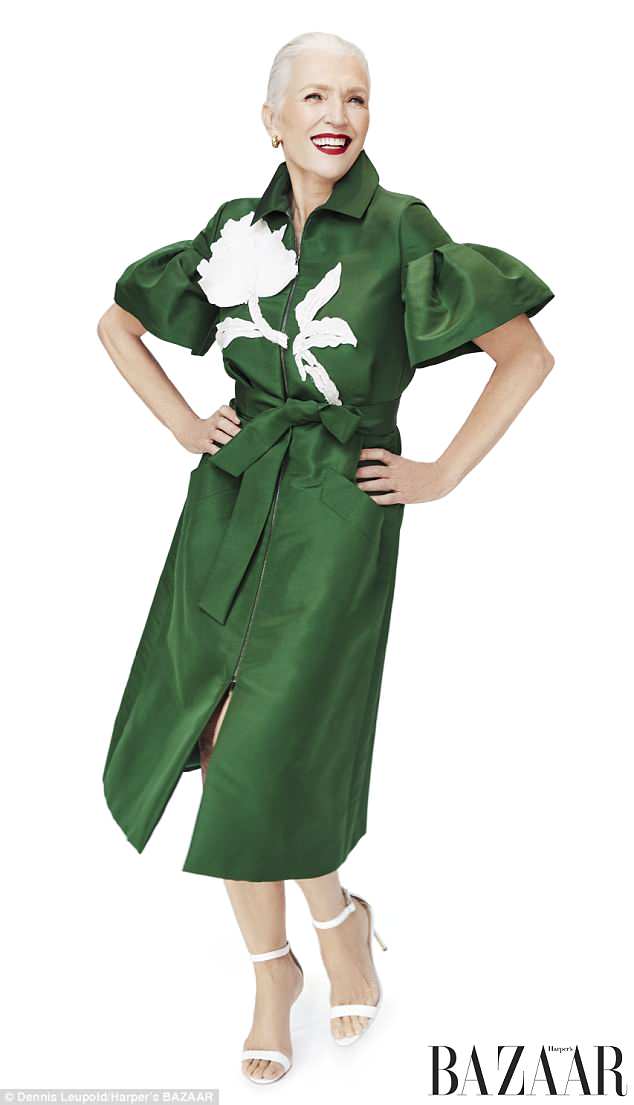 Celebration: Maye, who also donned a green Carolina Herrera frock, posed for the spread right before her birthday. She turns 70 years old on April 19

‘I’m optimistic, but even with all my optimism I never would have said to myself, “When I get to 70, I’m really going to take off.”

‘I would have sounded like a crazy lady,’ she explained.

Maye made history in September when she became the face of CoverGirl at the age of 69, and she happily reported that the ‘response has been so positive.’

‘People post #Goals and #GOAT. Do you know what GOAT means?’ she asked 72-year-old Susan, explaining that it is an acronym for ‘Greatest of All Time.’

‘Another hashtag they write is #OG. I had to ask my granddaughter what it meant; it’s Original Gangster. I laughed so much,’ Maye said.

The dietitian, who boasts more than 158,000 Instagram followers, knows that she has become ‘influencer’ after being a relatively unknown model with three kids. 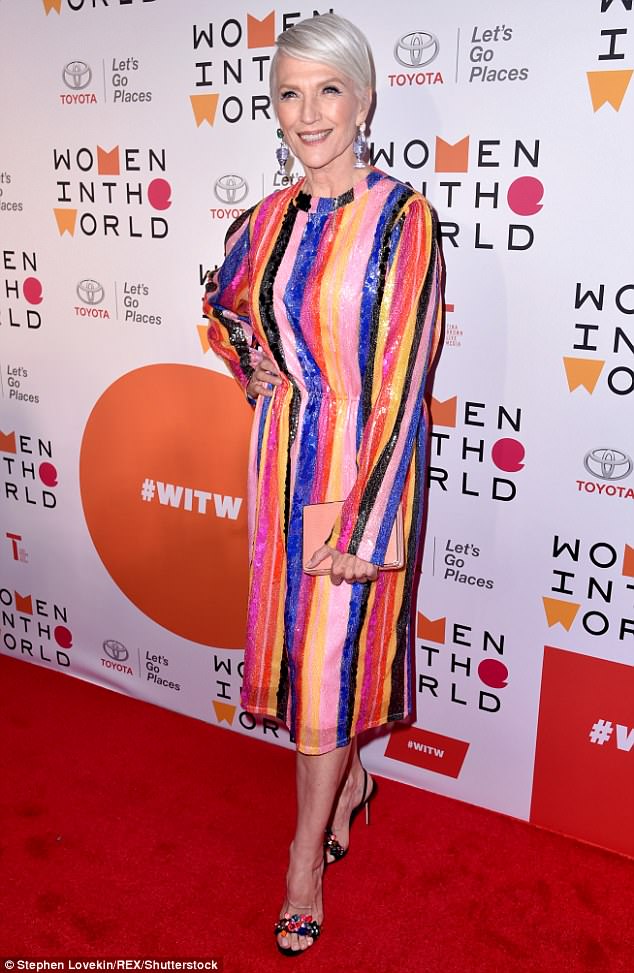 Rising star: The model (pictured at the Women in the World summit last Friday) told the magazine that she feels things are ‘really going to take off’ for her in her 70s 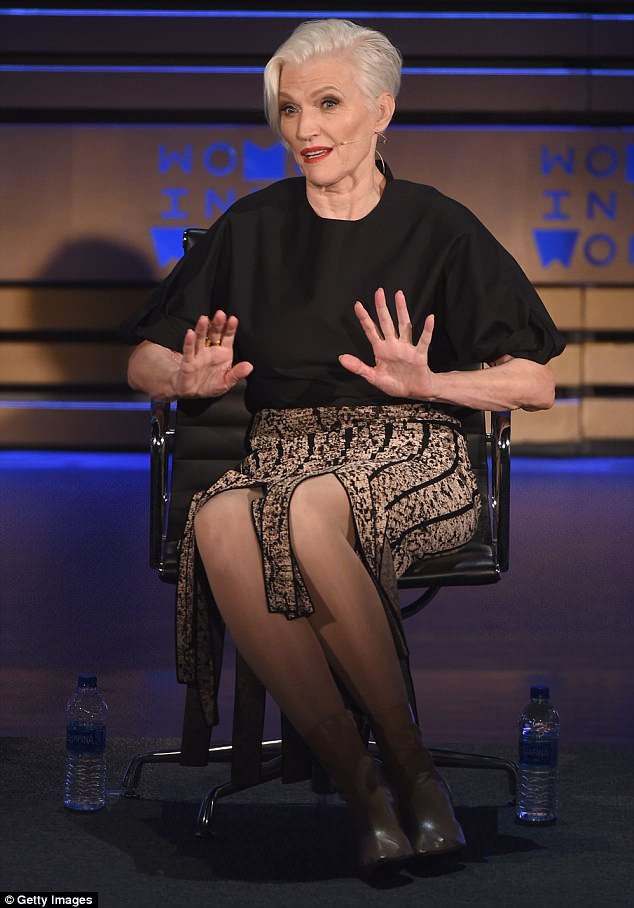 Social media star: Maye, who has more than 158,000 Instagram followers, opened up about learning what the hashtags #Goals, #GOAT, and #OG mean

Maye looks incredible in her latest editorial, which shows her modeling a ruffle one-shoulder dress by Stella McCartney.

She has a bright smile on her face that is accentuated by red lipstick that perfectly matches her cocktail dress.

Her white hair is straight and tucked behind her ear to show off her gold Tiffany & Co. earrings.

In another photo, May is sporting the same red lipstick while posing in a green Carolina Herrera dress featuring a white flower applique.

Her hair is slicked back, revealing her gold David Yurman earrings, and she has a pair of white Manolo Blahnik sandals on her feet.

Trick of the trade: The dietitian credits her beautiful skin to staying out of the sun when she can, using SPF when she can’t, and eating well

Working for her: ‘I eat the basic food groups: fruits and vegetables, whole grains, low-fat dairy, good fats and oils,’ she said of her diet 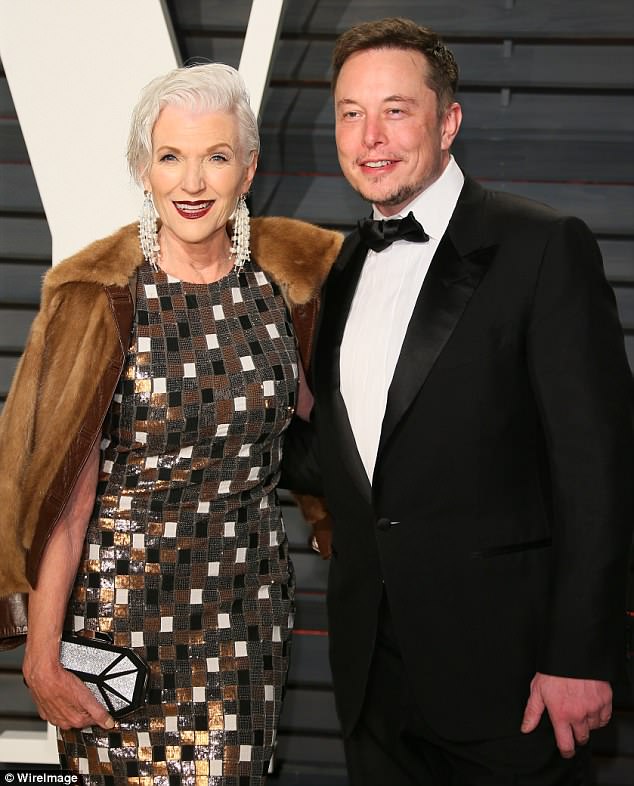 The grandmother of ten looks incredible in the shots, and she credits her beautiful skin to staying out of the sun when she can, using SPF when she can’t, and eating well.

‘I eat the basic food groups: fruits and vegetables, whole grains, low-fat dairy, good fats and oils,’ she said. ‘I do have butter on my bread because it’s delicious. I eat meat, especially chicken, sparingly, because I’m not a good cook.’

She noted: ‘In 45 years of counseling, I can tell you one thing for sure: People don’t gain weight from whole wheat; they gain it from fries and white bread.’

To keep fit, Maye goes to the gym and does 30 minutes on a stationary bike and then 10 minutes of weights and 10 minutes of stretching. She also walks her dog four times a day.

‘You must maintain a steady weight, especially at [my] age, as the cholesterol starts to shoot up,’ she advised. 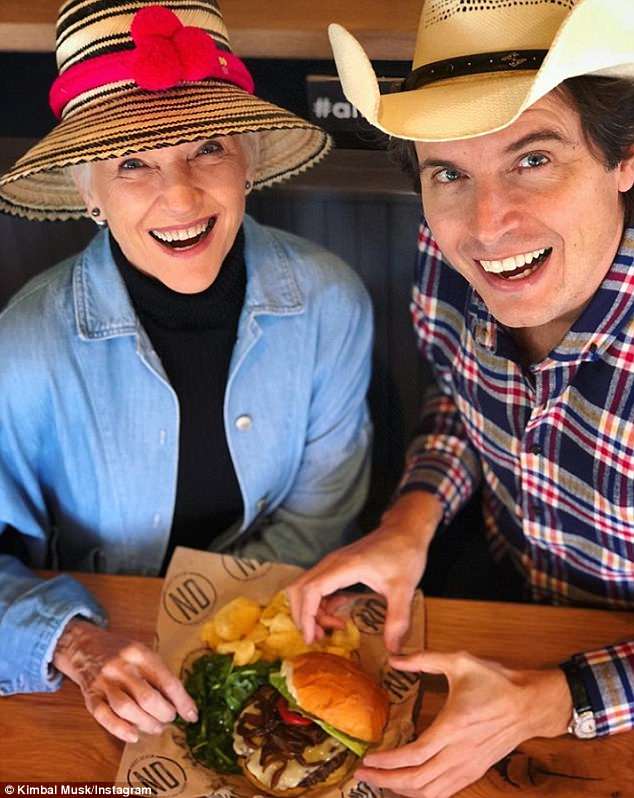 Yum! Her son Kimbal (picture), 45, has founded a chain of farm-to-table restaurants 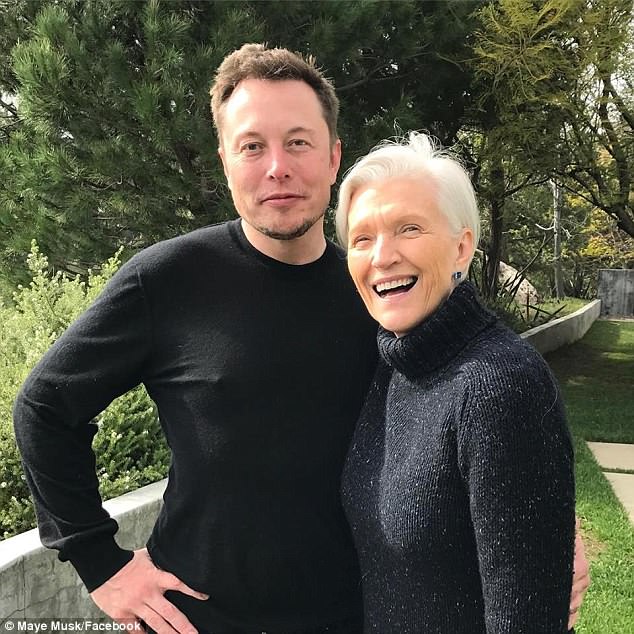 Not for her: Maye admitted that she probably won’t be on Elon’s planned flight to Mars

During the interview, Maye was asked if her son Elon showed signs of being an inventor as a child, and while the mom said he ‘was always curious,’ she pointed out that her ‘kids were always exploring things.

Elon, 46, is the eldest, but all of them are equally remarkable. Her son Kimbal, 45, has founded a chain of farm-to-table restaurants and her daughter Tosca, 44, is a filmmaker.

‘I’ve always encouraged their curiosity,’ she said. ‘But if they picked apart the toaster, they knew they had to put it back together again.’

Elon is also the CEO and founder of Space X, and following his successful rocket launch earlier this year, he is planning a flight to Mars. However, his mom probably won’t be on board.

‘I don’t know if I want to spend three months in a rocket,’ she admitted. ‘In the beginning, it will just be engineers, who will go first to set up a city. As a nutritionist, I could probably help by sending food. It would have to be compacted.’