New York City Mayor Bill de Blasio has said that he is finalizing ‘very substantial’ cuts to the NYPD budget, even as skyrocketing police retirements raise questions about adequate staffing.

‘We’re working with the City Council right now. We don’t have a final dollar figure, but we’re going to do something very, very substantial,’ de Blasio told WNYC-FM on Friday.

‘We’ll know more in the next few days,’ he added. ‘I think we are moving in a very good direction.’

New York City Council Speaker Corey Johnson has called for the NYPD to be defunded to the tune of $1 billion, out of the department’s $6 billion annual budget.

New York City Mayor Bill de Blasio has said that he is finalizing ‘very substantial’ cuts to the NYPD budget, as crime in the city skyrockets and

De Blasio said that funds cut from the city’s police budget would be diverted toward youth services and other unspecified ‘community needs’.

‘I am convinced in the next days — I’m very hopeful that we’ll get to a positive outcome with the council, a major shift in funds from the NYPD to youth services and other community needs,’ the mayor said on WNYC.

Meanwhile, 272 uniformed cops filed retirement papers from May 25 through June 24, the NYPD says.

That’s a 49 percent spike from the 183 officers who filed during the same period last year, according to the department.

Department insiders fear that the surging retirements could leave the department of roughly 36,000 badly understaffed.

‘We are worried about a surge in attrition reducing our headcount beyond what we can sustain without new recruits, and are afraid the City Council has not taken the surge into account,’ one department source told the New York Post. 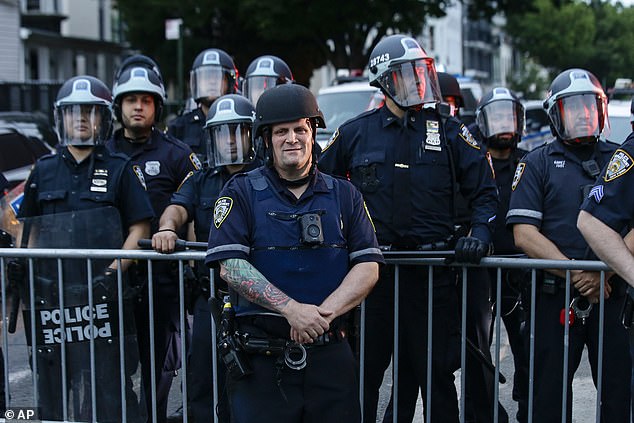 Ed Mullins, president of the Sergeants Benevolent Association, said an ‘exodus’ from the NYPD has begun.

He said nearly 80 of his members have recently filed for retirement, and that morale is ‘at the lowest levels I’ve seen in 38 years.’

‘People have had enough and no longer feel it’s worth risking their personal well-being for a thankless position,’ he added.

‘There is no leadership, no direction, no training for new policies,’ he said. ‘Department brass is paralyzed (and) too afraid to uphold their sworn oath in fear of losing their jobs. Sadly, the people of this city will soon experience what New York City was like in the 1980s.’

The spike in retirements comes amid massive anti-police protests in the wake of George Floyd’s in-custody death on May 25 in Minneapolis. 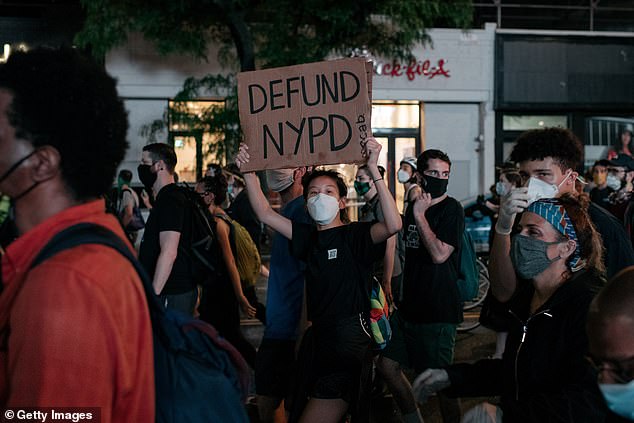 Protesters demanding that police be defunded march in defiance of a citywide curfew on June 5, 2020 in New York City

In the same time period, violent crime has also skyrocketed in New York City, which is on track to see the highest number of murders for the month of June since 1996.

In the past seven days, the number of shooting victims in New York was up 400 percent from the same period last year, according to NYPD stats.

Police Benevolent Association president Patrick Lynch said cops are ‘at their breaking point, whether they have 20 years on the job or only two.’

‘We are all asking the same question: ‘How can we keep doing our job in this environment?’ And that is exactly what the anti-cop crowd wants,’ the union boss added.

‘If we have no cops because no one wants to be a cop, they will have achieved their ultimate goal.’